A restaurateur has been praised for his classy response to a rude customer’s review who said he hoped “the owner gets cancer” after being told to respect other diners.

The disgruntled customer got a table at the popular Adelaide restaurant Yiasou George on New Year’s Eve, but left the one-star Google review the next day.

Our waiter was allergic to fun. This was advertised as a ‘party disco atmosphere’ but our laughter was ‘too loud’… If there were zero stars available I would give it… I hope the owner gets cancer,” said the reviewer known as Alex.

But owner Oliver Brown, who runs Yiasou George as part of local hospitality collective The Big Easy Group, turned the tables on the reviewer with a quick reply. 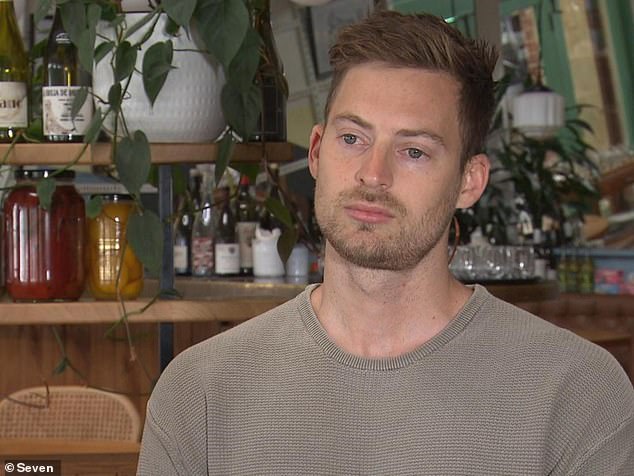 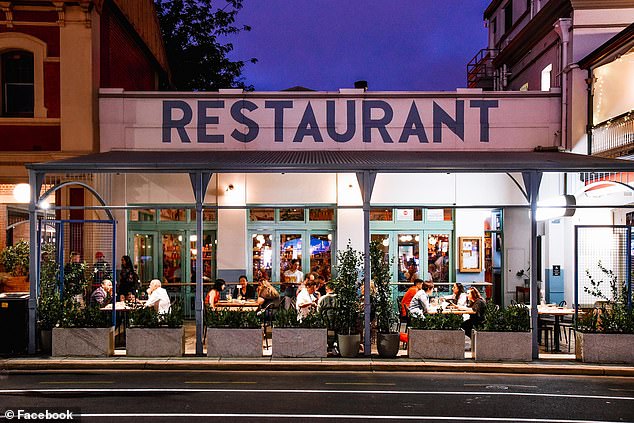 “It’s the owner here – the one you wished cancer on,” he wrote.

‘At Yiasou George, we love to see our customers having fun, but my staff told me that you had already had a little too much fun before you arrived, and they politely asked you to respect the other people dining in the restaurant .’

“What’s not very nice is cancer. And it’s not very funny to wish the restaurant staff doing their job. We donated the full amount of your meal to the Cancer Council.’

Mr Brown then shared a receipt for a $499 donation to the Cancer Council – the amount of the man’s bill.

He added that he and his staff have chosen to start the new year with “good vibes and love and support for everyone facing cancer.” 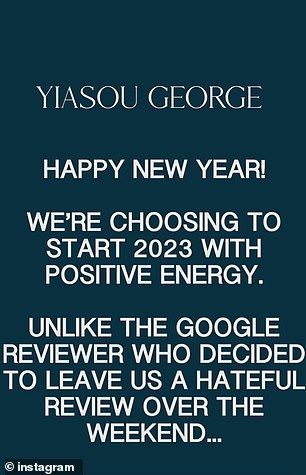 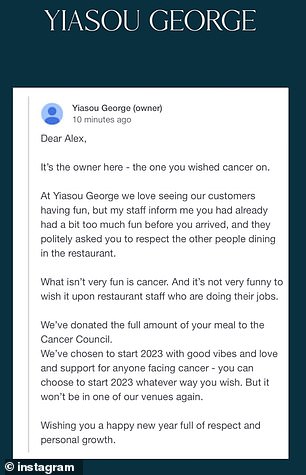 “You can choose to start 2023 however you want. But it won’t be in one of (The Big Easy Group’s) locations again.”

“I wish you a happy new year full of respect and personal growth.”

Mr de Bruin told The Adelaide Advertiser that the member of staff waiting at the customer’s table did a “great” job, adding that all guests received a feedback survey by email, but the man chose to insult them in public.

Social media was flooded with praise for how Mr Brown handled the situation and vows to dine more at his establishments. 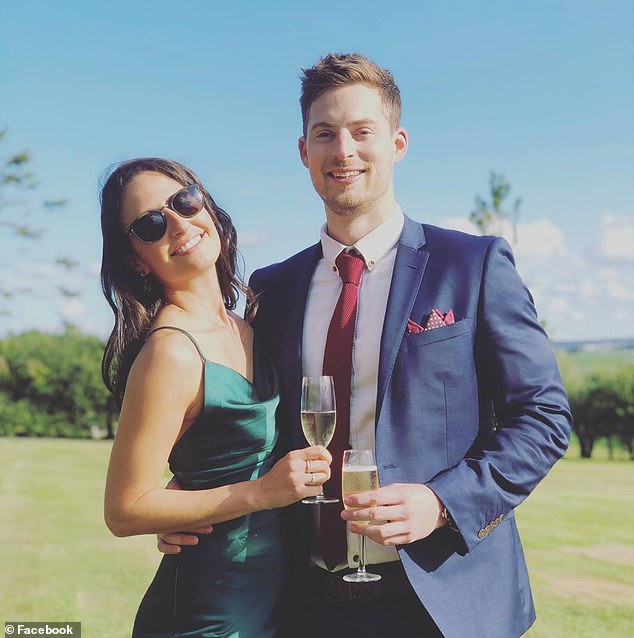 Mr Brown (pictured with his wife) runs the hospitality collective The Big Easy with seven bars and restaurants in Adelaide, including Yiasou George

“Congratulations on raising the bar both in hospitality and as a human being… this post makes me want to dine with your crew even more than I already do,” one person wrote.

‘All classes Oliver! A credit to you, your team and your company, brilliant,” wrote another.

“Alex should be ashamed, disgraceful. There are only a few keyboard warriors who will never be satisfied,” a third added.