Work for a horrible boss? You could end up being just as bad, as the bad behavior trickles down.

Work for a horrible boss? You could end up being just as bad, as hostile behavior at the top of an organization has a trickle-down effect, a study shows.

By Sophie Curtis for Mailonline

If you work for a horrible boss, you can spend your days telling yourself how much better you are at his job.

But a new study finds you could end up just as bad, as hostile behavior from ‘abusive’ bosses has a trickle-down effect, leading coworkers to adopt similar behavior.

Inappropriate language, sexual harassment, outbursts, humiliation and misuse of power are examples of hostile behavior, according to the researchers.

They found that more than two-thirds of employees who had experienced this type of hostile behavior from a leader later witnessed interpersonal aggression within the broader workforce.

This can lead to a toxic atmosphere of insecurity and burnout in the workplace, according to the study from Anglia Ruskin University (ARU) in the UK, as well as researchers in Pakistan, China and the US.

“It is clear from our study that hostile behavior at the top of a workplace is not only detrimental to people in terms of emotional exhaustion and job security,” said co-author Dr. Nadeem Khalid, Senior Lecturer in Entrepreneurship. and Strategy at ARU.

“It is also likely to encourage other employees to act unethically, creating a toxic environment throughout the organization.” 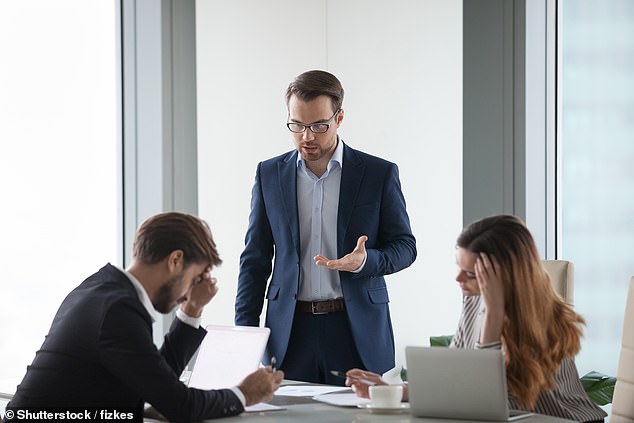 Hostile behavior from ‘abusive’ bosses has a trickle down effect, leading co-workers to adopt similar behaviour.

From president to salesman, many job titles often include the word “man.”

Allison MN Archer, who led the study, said: “While some dismiss gender-neutral titles as ‘political correctness’, this research suggests that implicitly sexist language in male titles reinforces stereotypes linking masculinity to leadership and , consequently, weaken the connection between women and leadership.’

For the study, researchers surveyed 323 employees about their experiences of abusive behavior from superiors and peers, as well as their job security and level of emotional exhaustion.

Examples of hostile behavior in the workplace included the use of inappropriate language, sexual harassment, outbursts, humiliation, and abuse of power.

They identified a ‘significant’ link between abusive leaders and abusive behavior from co-workers.

They pointed to the ‘reciprocal relationship’ between bosses and junior staff, in which bullied employees feel that the only way to get ahead is to abuse others.

Of the 323 people involved in the study, 68 percent who had experienced hostile behavior from a leader had also witnessed interpersonal aggression from the workforce at large, and 35 percent had faced abusive behavior Among partners.

As a result, a toxic atmosphere of heightened competition is created.

The study found a link between experiencing hostile behavior from leaders and emotional exhaustion and job insecurity.

This suggests that mistreatment by peers can damage employees’ confidence in their work and their role within an organization.

Of those who had experienced hostile behavior from a leader, 52 percent had suffered from emotional exhaustion and 77 percent had concerns about job security. 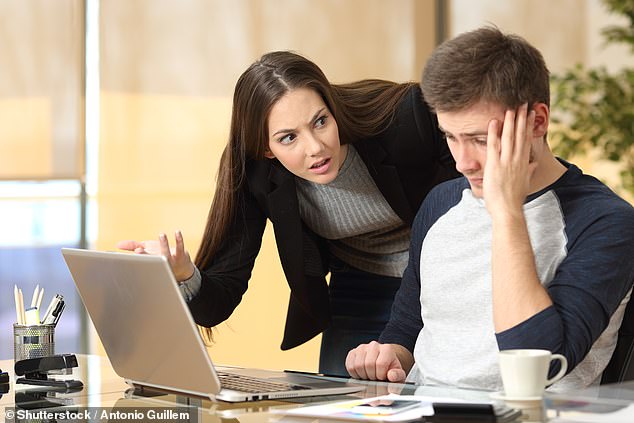 Inappropriate language, sexual harassment, outbursts, humiliation and misuse of power are examples of hostile behavior, according to the researchers.

“This mirroring of negative behavior may be rooted in the reciprocal relationship between leaders and employees,” said Dr. Khalid.

‘An employee who is mistreated may feel that the only way to get ahead in his job is to treat others as he has treated himself.

“This may not always be intentional, but it results in a race to the bottom among employees and harms job security and leads to stress and burnout.”

He also noted that previous studies have shown that abusive behavior from leaders is associated with employee disengagement and has a negative effect on emotional well-being.

“Our study suggests that the situation could be exacerbated by the negative behavior of the workers in general, as well as the leader,” he said.

The study was published in the journal Frontiers in Psychology.

Bad news for bosses: The trend to ‘quietly quit’ for micro-breaks actually makes employees BETTER at their jobs

‘Quietly quitting’ is a trend that has taken over TikTok in recent weeks, with Gen Z workers doing the bare minimum at work to avoid burnout.

The trend has been widely criticized by experts, with one calling it a “short-term fix.”

However, a new study suggests the trend could actually make employees better at their jobs.

Researchers at the West University of Timioara found that taking micro-breaks can increase energy and reduce fatigue at work.

“Micro-breaks are efficient in preserving high levels of vigor and relieving fatigue,” the researchers wrote in their study, published in PLUS ONE.

While micro-breaks didn’t seem to affect task performance, the researchers found that longer breaks did.

Based on the findings, the researchers suggest that bosses should offer their employees a mix of micro-breaks and longer breaks.

25 civilians are killed in an attack on a convoy in Zaporizhzhia, Ukraine says.