What is sciatica? Adele’s debilitating back pain could affect 40% of the people in her life

Adele has revealed that she suffers from a debilitating back condition that affects four in 10 Americans in their lifetime.

The 34-year-old was filmed limping across the stage in Las Vegas at a New Year’s Eve concert, telling fans: “I have a wobble these days because I have really bad sciatica.”

The injury typically occurs due to a slipped disc, pressing against the sciatic nerve that runs from the lower back to the foot. It can cause shooting pains, a cramping sensation, and can be so severe that it leaves someone unable to walk.

Adele has been plagued with back problems for half her life after suffering two herniated discs, one when she was 15 and the second two years ago. 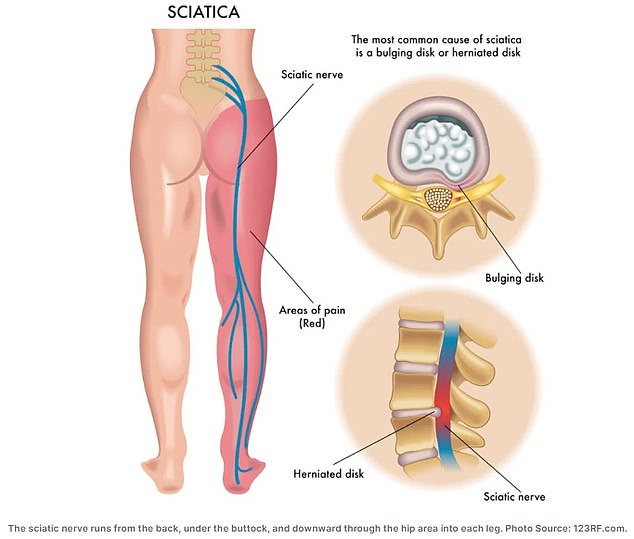 The graph above shows the sciatic nerve (blue line) and where it connects to the spinal cord. In sciatica, the nerve is compressed. This can be caused by a slipped or herniated disc (shown on the right) or other factors, such as a blood clot and arthritis. The compression causes pain in any part of the nerve, possibly even in the foot or lower back. Victims may face pain so intense that it prevents them from moving. They may also experience “knife-like” pain in the affected leg. There is a sciatic nerve that runs through the left and right leg, but in sciatica only one is usually affected. 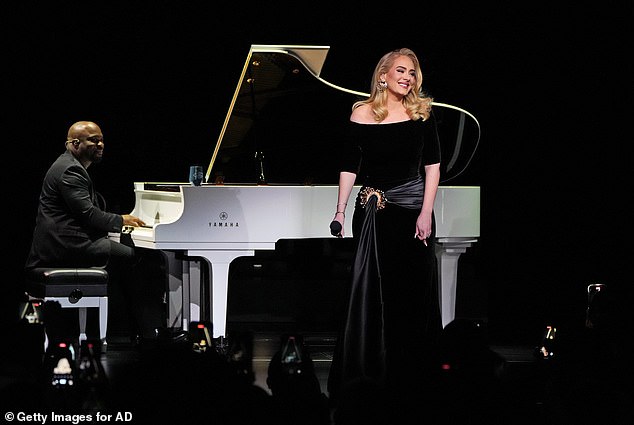 Adele was filmed limping across the stage at a New Year’s Eve concert at Caesar’s Palace’s Colosseum in Las Vegas, Nevada. She is shown above performing at the same stadium in November of last year.

The herniated disc when she was 15 years old occurred after the star ‘sneezed’ in bed, she revealed.

The second slipped in January 2021 after her son Angelo, then eight, jumped in to scare her as she was coming out of the bathroom.

Adele also has an extra bone in her spine. Most people have five bones in their lower back, called the lumbar vertebrae, but Adele has six.

The sciatic nerve is attached to the spinal cord and has two jobs: to help the muscles in the legs and feet move, and to help people feel their legs.

Sciatica is nerve pain due to nerve injury or irritation, originating in the buttock area.

Doctors say patients may feel a sharp “knife-like” pain in the affected leg or a cramping sensation in the leg.

This happens due to pressure on the sciatic nerve, causing it to send pain signals to the brain.

This can last for weeks and in some cases is so severe that the victim is unable to move.

It can also lead to leg weakness and incontinence.

Even when someone recovers from the acute injury, it can recur in response to sitting too much, wearing uncomfortable shoes, or even sleeping in the wrong position.

Experts at Harvard Medical School say that about 40 percent of Americans will experience sciatica at least once in their lifetime.

It is most common among people between the ages of 30 and 50 and those who already suffer from acute or chronic back pain.

But those who are obese, smoke, or don’t exercise enough are also more at risk. Lifting heavy weights in the gym also puts someone at higher risk.

Doctors from Johns Hopkins University say that sciatica is usually caused by a slipped or herniated disc in the spine.

Between the bones, or vertebrae, in the spinal column are rubbery cushions with soft, gelatinous centers called discs.

When these slip or herniate, the gelatinous center of the discs has breached the lining and is pressing against other bones and nerves.

Other causes of sciatica include obesity, poor posture, blood clots, arthritis, and some nerve disorders. Doctors say that sometimes the cause cannot be diagnosed.

Adele told the British music publication Face in 2021: ‘I’ve had back pain for, like, half my life, really.

‘It breaks out, usually due to stress or a stupid posture.

“But where I have my strong tummy, down at the bottom, which I’ve never had before, my back doesn’t play as much.”

Doctors say that about one in ten people have an extra bone in their spine, which may be due to a genetic abnormality or because the bones in the spine don’t fuse together correctly after birth.

It is often harmless and most people go their entire lives without realizing it is there. But in some cases, it can lead to serious back problems.

Doctors treat sciatica by focusing on relieving the pain symptoms of sufferers.

This includes telling people to take pain relievers, such as ibuprofen, or getting a steroid injection around the nerve root causing the pain.

Surgery is also an option to remove the bone or disc that is pressing on the nerve, but this is only done when the patient has muscle weakness or loss of bowel and bladder control.

But those with a deeper underlying cause, such as overgrowth of a bone, will require regular treatment.

What is Adele’s extra spine? is it serious

Most people have 33 vertebrae that make up the spinal column.

But Adele revealed in 2021 that she has an extra vertebra, or 34, in the lower part of her spine.

This is normally caused by genetic abnormalities or vertebrae that do not fuse together correctly shortly after birth.

There are normally five vertebrae in the lower back, or lumbar vertebrae, named L1 through L5. But about one in ten people have an L6.

Most of the time this causes no symptoms and many don’t realize it’s there, but in some cases it can lead to serious back problems.

Doctors on the Spinal Injury Website spinalcord.com say that the extra bone is normally just a ‘harmless anomaly’.

They add: ‘An L6 vertebra is not, in itself, a cause for concern, and most people go their entire lives without even knowing they have the condition.

“However, this extra bone can complicate spinal health in some situations.”