Scientists have developed an artificial tissue that has successfully restored penile function in pigs and looks promising to one day be used in humans.

The ‘bionic penis’ effectively mimics a fibrous covering of tissue that is necessary to maintain erections, called the tunica albuginea, which pumps blood to the penis.

About half of men between the ages of 40 and 70 reportedly experience some form of erectile dysfunction, while about five percent suffer from Peyronie’s disease, which is believed to occur as a result of sexual injury.

Experts from the South China University of Technology in Guangzhou, China, said the pigs involved in their study recovered normal erection function with the help of artificial tunica albuginea (ATA). 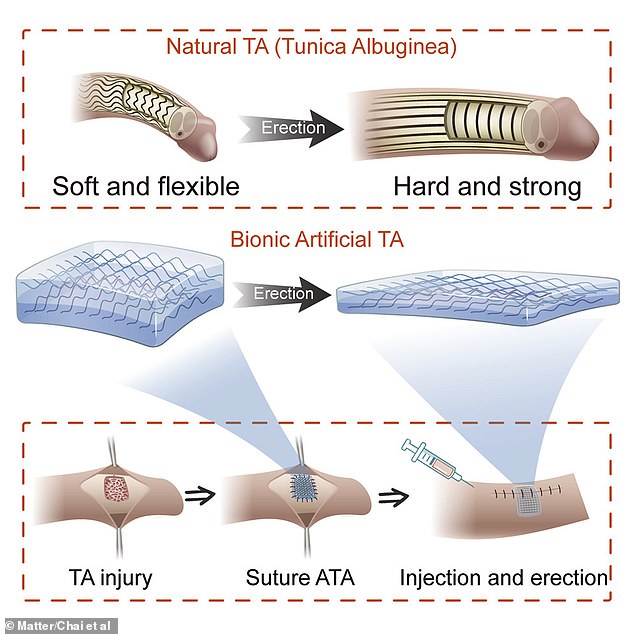 Scientists have developed an artificial tissue that has successfully restored penile function in pigs and looks promising to one day be used in humans. The synthetic tissue effectively mimics a fibrous covering of tissue that is necessary to maintain erections, called the tunica albuginea.

WHAT IS TUNICA ALBUGINEA?

The tunica albuginea is the protective layer around the erectile tissue of the penis that pumps blood to this area.

The tunica albuginea can be damaged during sexual intercourse and cause Peyronie’s disease.

“We highly anticipated the problems and results of the ATA construction process, but were still surprised by the results in animal experiments, where the penis returned to normal erection immediately after ATA use,” said the study author. Xuetao Shi, a researcher at the South China University of Technology.

“The biggest advantage of ATA that we reported is that it achieves tissue-like functions by mimicking the microstructure of natural tissues.

“This design approach is not limited to the biomimetic design of tunica albuginea tissues, but can be extended to many other load-bearing tissues.”

While many previous studies have focused on repairing the urethra, Shi said less research has focused on restoring erectile function.

However, this is not the first time that researchers have attempted to repair damaged tissue in the tunica albuginea.

The difference is that in the past, studies have looked at making patches of other tissues in a patient’s body, but the problem with this is that their immune system often rejects them or complications result.

Because their microstructures are different from those of the natural tunica albuginea, it is also difficult for these patches to replace the natural tissue effectively.

To address this problem, researchers from the South China University of Technology developed ATA based on polyvinyl alcohol, which has a curly fiber structure similar to that of natural tissue.

As a result, the artificial material has biomechanical properties that mimic those of the tunica albuginea.

The first thing the researchers had to do was establish whether the synthetic material was toxic to any other tissue in the human body, as it is designed to stay in the body for a long time, and they found that it should not be harmful.

They then tested the ATA in miniature pigs with lesions in the tunica albuginea.

The scientists found that the patches made from artificial tissue restored erectile function to a degree that was nearly equivalent to normal penile tissue.

They then tested the artificial tissue a month later and found that it helped achieve a normal erection after injecting saline into the penis.

“The results one month after the procedure showed that the ATA group achieved good, though not perfect, repair results,” Shi said. 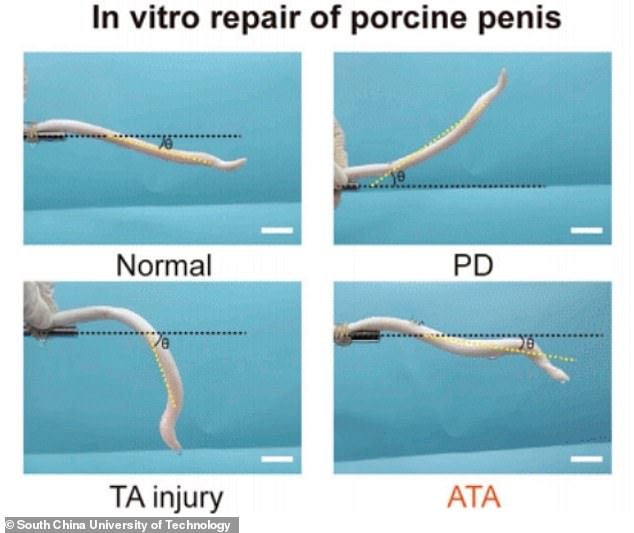 The scientists found that patches made of artificial tissue (bottom right) restored erectile function to a degree that was nearly equivalent to normal penile tissue (top left). Bottom left shows the penis after a lesion to the tunica albuginea.

Shi noted that in penile lesions, the tunica albuginea is usually not the only tissue damaged.

Surrounding nerves and the corpus cavernosum, the spongy tissue that runs along the shaft of the penis, are often damaged as well, making repairs even more difficult.

“Our work at this stage is focused on single-tissue repair in the penis, and the next stage will be to consider repairing the overall penile defect or constructing an artificial penis from a holistic perspective,” Shi added.

He said his team now wants to investigate techniques to repair other tissues, including the heart and bladder.

In their paper, the researchers wrote: ‘ATA shows the ability to repair lesions and restore normal erectile function to ATA-damaged penile tissue in a pig model.

‘Our study shows that ATA shows great promise for the repair of penile injuries.

The study has been published in the journal Subject.

If you liked this article…

Find out how snakes have clitorises too as scientists discover the erogenous zone in nine species for the first time.

A study has also revealed that the human clitoris is even more sensitive than we thought and contains more than 10,000 nerve fibers.

Furthermore, dolphins also have sex for fun, as they also have functional clitorises that provide pleasure when stimulated.

HOW IS A PENIS FRACTURED?

Since 1924, 1,600 cases have been recorded worldwide, about 16 cases per year, the Telegraph previously reported.

The researchers noted that in 50 percent of cases, a frightening cracking noise can be heard. Four out of five male victims lost their erection.

Those who have already been traumatized by breaking their penises are often left with erectile dysfunction problems and a lifetime of painful sex.

Blood flows into the corpora cavernosa that run the length of the penis, making it hard during an erection.

The trick to stopping penile injuries is to push very shallow, according to sex expert Tracey Cox.

Holding your partner close to you using a grinding motion rather than pushing will also reduce risk, he told MailOnline.