Mowgli’s family of lupines in ‘The Jungle Book’ may not be entirely based on fiction, as scientists have discovered that wolves can actually show attachment to humans.

Wild animals are able to distinguish between strangers and people they know, and they show far more affection for those they are familiar with than even dogs.

Researchers at Stockholm University in Sweden tested 10 wolves and 12 dogs to investigate how they behaved in strange and stressful situations.

The wolves showed affection to the caretaker they knew best by approaching them and spending more time greeting them.

This finding contradicts the idea that dogs’ attachment to humans only developed after humans domesticated them.

Instead, wolves that demonstrated this attachment “might have had a selective advantage in the early stages of dog domestication,” according to lead author Dr. Christina Hansen Wheat. 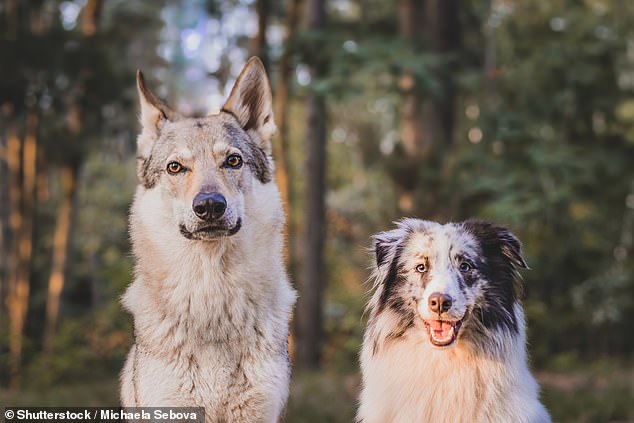 Wolves are able to distinguish between strangers and people they know, and show much more affection to those they are familiar with than even dogs (stock image) 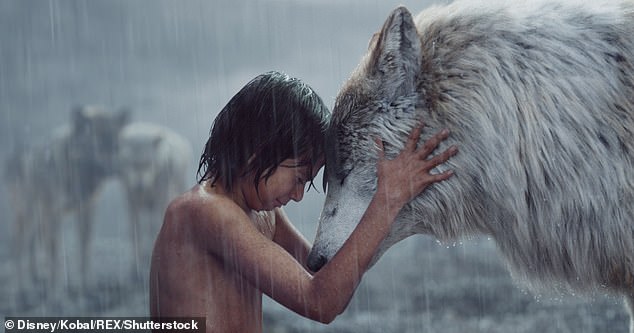 Mowgli is a character in the Rudyard Kipling story ‘The Jungle Book’, which was originally animated by Disney in a 1967 film, and then as a live-action remake in 2016 (pictured). He is known as ‘Cub Man’ because he was raised by a pack of wolves and Baloo the bear. 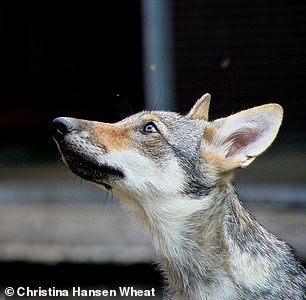 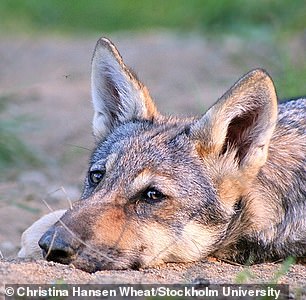 Researchers at Stockholm University in Sweden tested 10 wolves and 12 dogs to investigate how they behaved in strange and stressful situations. The team’s hand raised the wolf and dog pups under identical conditions from the time they were ten days old, and they were tested when they reached 23 weeks. Left: In the photo: Wolf cub Björk. Right: Wolf Cub Hendrix

HOW WERE DOGS TAMED?

A genetic analysis of the world’s oldest dog remains revealed that dogs were domesticated in a single event by humans living in Eurasia, around 20,000 to 40,000 years ago.

Dr Krishna Veeramah, assistant professor of evolution at Stony Brook University, told MailOnline: ‘The current hypothesis is that dog domestication probably arose passively, with a wolf population somewhere in the world living on the outskirts of hunter-gatherer camps feeding on human-created waste.

“Those wolves that were more docile and less aggressive would have been more successful at this, and while humans didn’t initially derive any kind of benefit from this process, over time they would have evolved some sort of symbiotic.” [mutually beneficial] relationship with these animals, eventually evolving into the dogs we see today.’

Dog domestication is known to have occurred at least 15,000 years ago, when gray wolves and dogs diverged from an extinct wolf species.

Many researchers believe that their ability to form bonds with humans developed around the same time, probably over thousands of years, as they became more docile.

However, Dr. Hansen Wheat believed that people may have selectively bred dogs based on a pre-existing attachment characteristic.

To test this theory, they used a behavioral test specifically designed to quantify attachment behaviors in canids, called the Strange Situation Test.

This was originally developed for human babies, however here it could reveal whether domestication influenced dogs’ attachment to humans.

It is a seven-stage procedure in which a familiar person or stranger interacts with the test animal in a room and their reactions are monitored.

In one such stage, the familiar person and the stranger take turns entering and leaving the room in order to create a strange and stressful situation for the animal.

The theory is that this unstable environment will stimulate the animal’s attachment behaviors.

As the animals go through the tests, they look for signs of wolves and dogs that discriminate between the familiar and the strange person.

These could include showing more affection or spending more time greeting and being in physical contact with the familiar person. 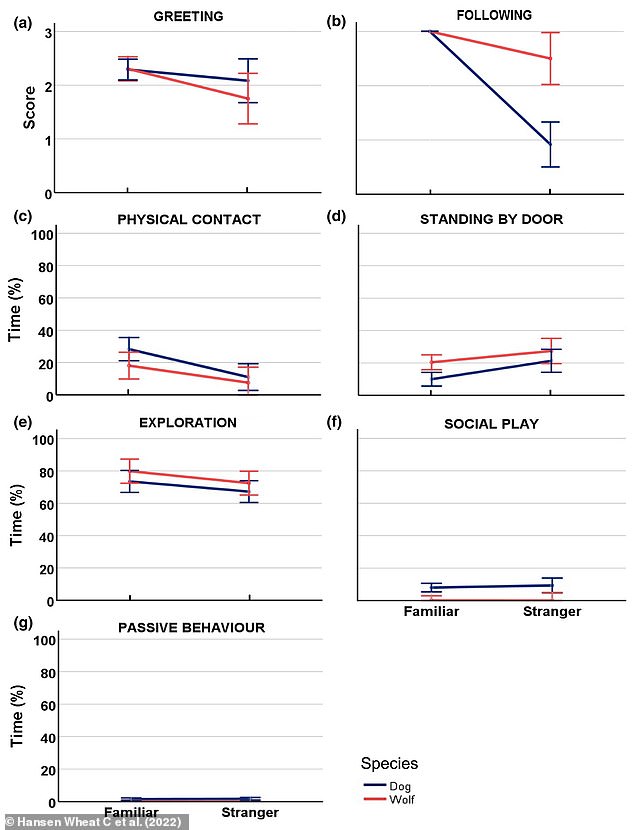 Proportion of time that wolf (red) and dog (blue) pups demonstrated attachment behaviors toward or in the presence of a familiar person versus a stranger. A slanted line shows the discrimination between the two people. A: Greeting, B: Following, C: Physical contact, D: Standing by the door, E: Exploration, F: Social play, G: Passive behavior

The team hand-reared wolf and dog pups in identical conditions from 10 days old to prepare them for the trial, which they took when they reached 23 weeks.

During the test, the wolves spontaneously discriminated between a familiar person and a stranger just as well as the dogs.

They also showed more proximity-seeking and affiliation behaviors toward the familiar person.

Additionally, the presence of the familiar person acted as a social stress buffer for the wolves, calming them down in a stressful situation.

Behavioral ecologist Dr. Hansen Wheat said: “It was very clear that wolves, like dogs, preferred the familiar person over the strange one.”

“But what was perhaps even more interesting was that while the dogs were not particularly affected by the test situation, the wolves were.

They were walking around the evidence room.

“I don’t think this has ever been shown to be the case for wolves before and this also adds to the existence of a strong bond between the animals and the familiar person.” 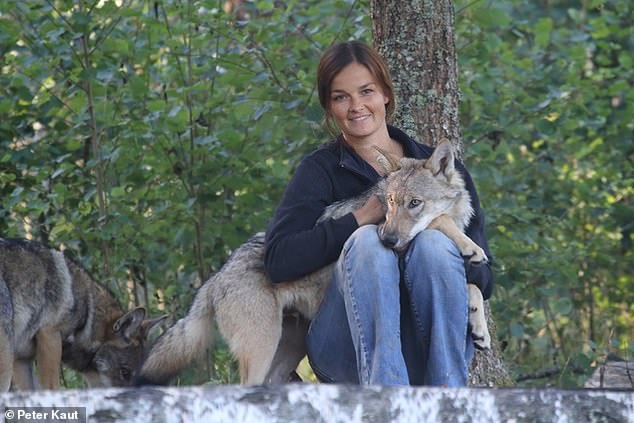 Dr Hansen Wheat said: “It was very clear that wolves, like dogs, preferred the familiar person over the stranger.” Pictured: Lead author Dr. Hansen Wheat and Lemmy the wolf 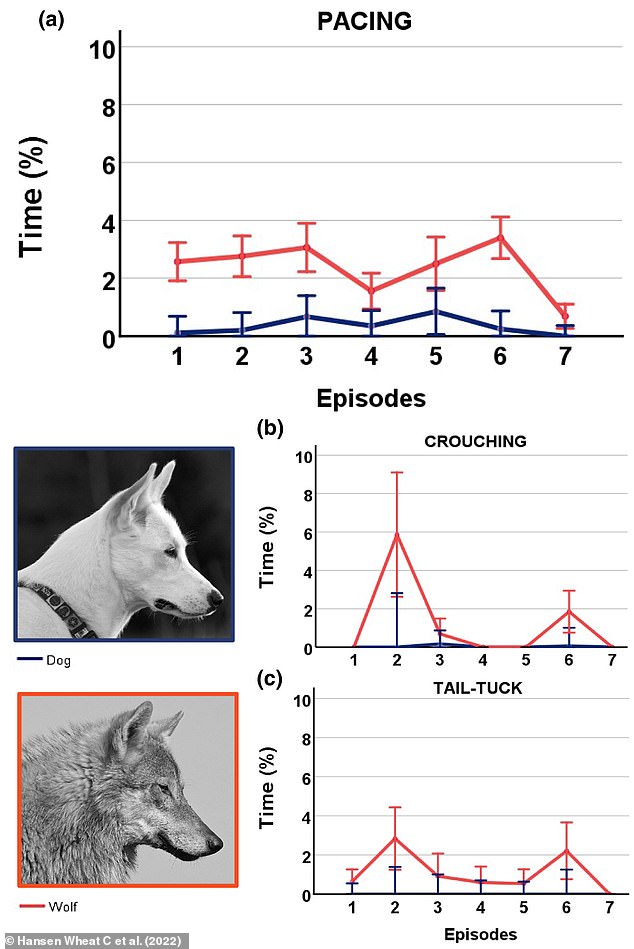 Proportion of time that wolf (red) and dog (blue) pups demonstrated stressful and fearful behaviors during the seven stages (“episodes”) of the Strange Situations Test. A: walk, B: crouch, C: stick tail

These findings, published today in Ecology and Evolutionsuggest that the ability to discriminate between a familiar person and a stranger is not unique to dogs.

Therefore, the authors conclude that human attachment was not instilled in dogs through domestication and could have arisen through selective breeding of wolves.

Dr Hansen Wheat said: “If there is variation in human-directed attachment behavior in wolves, this behavior could have been a potential target for early selective pressures exerted during dog domestication.”

Is THAT how dogs became man’s best friend? Genetic mutations made the puppies more comfortable with humans

Since dogs were first domesticated, they have become one of the most popular pet species in the world.

But until now, it hasn’t been clear exactly why animals became “man’s best friend.”

Now scientists at Azabu University in Japan think they have the answer, having discovered two key genetic mutations in dogs.

These mutations may have played a role in their domestication by reducing stress and making the pups more comfortable interacting with humans, according to the team.