A ‘virtual labrador’ named Dave has shed new light on the growing threat of dog attacks on children.

Scientists have harnessed the power of immersive technology to simulate bites to help people recognize aggressive behavior in dogs.

Dubbed DAVE (Dog Assisted Virtual Environment), the simulation could hold the key to reducing the tens of millions of injuries sustained each year.

“This study highlights promising results for the possible future use of virtual reality in behavioral research, education, and psychological treatment.” 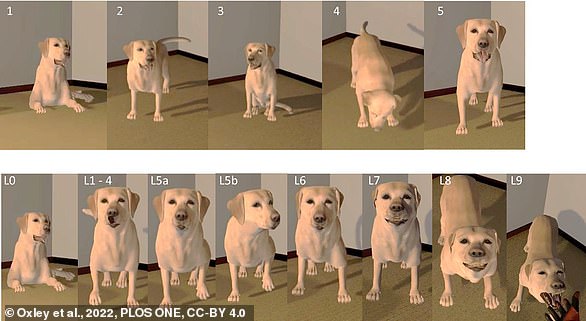 The study, published in plus oneinvestigated human behavior towards DAVE and the interpretation of his non-reactive and aggressive behaviors during an exploration task.

In the experiments, 16 students were randomly assigned to an aggressive model followed by a non-reactive model (AN group) or vice versa (NA group).

The goal was to test dog behavior recognition and associated human approach and avoidance behavior.

When the participants were asked if they noticed anything about the dog’s behavior, most of the time they referred to the movement of their body as a whole or part of the body.

They also frequently used adjectives to describe the emotion or motivation for the dog’s behaviors instead of describing the actual behavioral cues.

In the non-reactive scenario, five noticed the queue compared to one in the aggressive scenario.

As for the individuals who were ‘bitten’, all three reported seeing the dog showing its teeth and indicating a threat or warning, and two noted that it licked its lips.

All participants said they heard some type of vocalization from the dog, such as growling or barking, during the aggressive exploration scenario.

Mr Oxley said: “Participants who moved more slowly towards the aggressive dog also tended to stop earlier and at a greater distance from the dog.”

This could potentially indicate that certain people are more cautious or may more easily recognize previous relevant cues and therefore approach at a slower speed.

“Participants moved significantly closer to the non-reactive dog model compared to the aggressive dog model, indicating that they perceived it as less of a threat to them, as supported by reported interpretations.”