The Department for Transport estimates that 1,558 people were killed in accidents on British roads in 2021, up 7 per cent from the previous year, when four of those months were spent in a nationwide lockdown that sent traffic levels plummeting.

The report also highlighted a 193 percent increase in e-scooter collisions, resulting in 1,434 injuries, including 10 fatalities, in total last year. 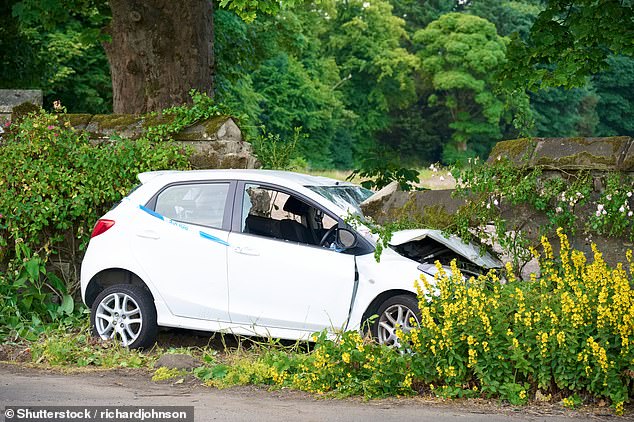 Road casualty data revealed: Compared to 2019 before the pandemic, deaths on Britain’s roads were 12% lower, although deaths per billion miles traveled were higher, the DfT confirmed.

While statistics suggest that road deaths have decreased based on the 2019 to 2021 comparison, it is important to note that last year’s traffic levels remained lower than normal due to closure periods between January and March. , as well as an increase in work and learning. from home.

Simon Williams, RAC road safety spokesman, says this “suggests little progress is being made to make our roads safer”, and called on the government to publish an updated road safety plan, even if it will follow the steps of the EU by requiring speed limiters on all new cars.

Williams said a clear plan would help the nation “address poor driving standards and illegal behavior behind the wheel.”

The newly released report by DfT shows that a total of 25,892 people were seriously injured on Britain’s roads last year, while the total number of casualties at all levels, including fatalities, was 128,209. 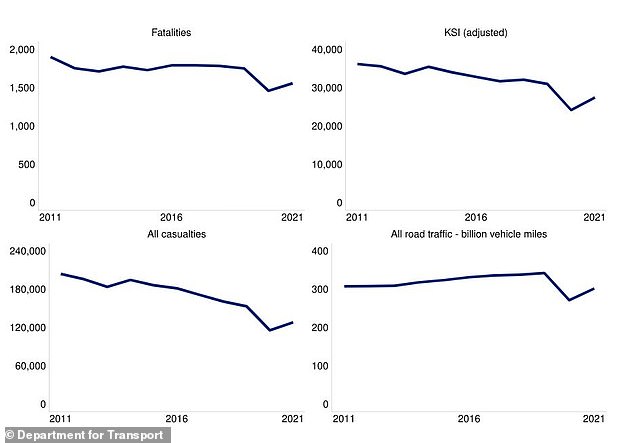 It also revealed that Britain is seeing a worrying resurgence of drivers and passengers not taking legal safety precautions when inside a moving vehicle, and that not wearing a seat belt contributes to 30 per cent of car deaths in 2021.

This is the highest proportion of road deaths related to not being properly restrained on record and is four percentage points higher than the five-year average.

For deaths that occurred on highways at night, the proportion related to not wearing a seat belt was even higher at an “appalling” 47 percent, an analysis by the AA found.

Younger car occupants between the ages of 17 and 29 were more likely to die without wearing a seat belt at 40 percent, while there was a higher proportion of men killed in cars (34 percent) than women (20 percent) who were not buckled up when the crash occurred, the motoring group says.

“This is a terrible increase in road deaths where wearing a seat belt could very well have been the difference between surviving or dying in a traffic accident,” said Jack Cousens, head of road policy at AA.

‘The release of pandemic lockdowns may have fueled some of the increase, but the death rate without wearing a seatbelt was rising even before Covid.

‘It may take a road safety campaign to raise the danger once again. It is clear that the message is being forgotten.

Despite concerns raised by motoring groups that road deaths are not going down, the latest data from DfT shows the UK still has some of the safest roads in the world, recording the sixth-highest rate. drop in deaths in the world. 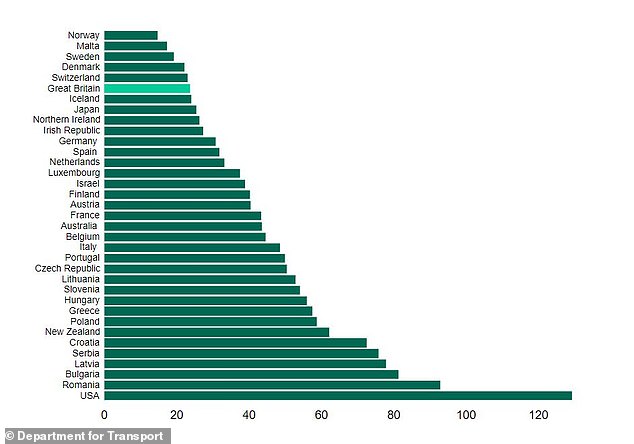 The DfT says that Britain has the sixth safest roads in the world. This graph shows road fatalities per million inhabitants by country in 2021

The DfT figures also show that the number of collisions involving e-scooters increased year on year by a staggering 193 per cent.

Data shows that the number of pedestrians injured after being hit by an electric scooter was more than four times higher in 2021 than the previous year, with 229 people traveling on foot injured by the devices last year, including 67 who were seriously injured. wounds.

That’s more than a total of 57 pedestrian fatalities in 2020, which included just 13 serious injuries.

In total, 1,434 injuries of varying severity occurred as a result of collisions with e-scooter users.

There were 10 deaths recorded, compared to one in 2020, and all the deaths were those traveling on the devices.

Four out of five (79 percent) of serious injuries caused by e-scooter crashes were also to the riders themselves. 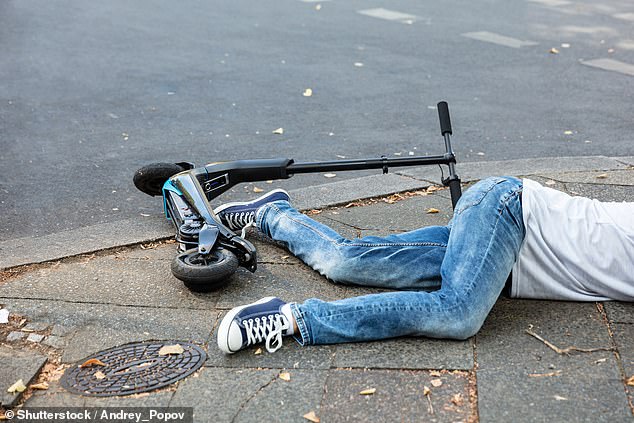 Some 229 pedestrians were injured after being hit by electric scooters last year, including 67 who were seriously injured, according to DfT records.

AA’s Mr Cousens commented: “We were hopeful that the lockdowns and restricted travel during the pandemic would reset road deaths, but sadly they have increased since 2020 and a new trend has been set.”

“As e-scooter testing continues across the country, accidents involving e-scooters are up 193 percent in 2021 compared to 2020.

“The broader introduction of micromobility into the national transportation landscape must consider how we can embrace new and emerging personal mobility technology without compromising the safety of all road users, including pedestrians.”

Martin Usher, a partner at Lime Solicitors, said today’s figures confirmed what many had suspected: a “marked increase” in e-scooter accidents and injuries over the previous 12 months.

“Given the triple increase in crashes and casualties, we need more effective measures to improve road safety,” he said.

“While rental scooters have speed limits, we know that there are thousands of illegal private vehicles being driven dangerously on public roads. The Government cannot continue to delay responding to the changing landscape of metropolitan transport.

“Electric scooters are sustainable and profitable, but they need regulation like mandatory training similar to a cycling competition course, helmets, and private property insurance to keep people safe.”