The Pointless star, 52, took to Instagram today to share a photo from their big day, which showed the newlywed couple beaming as they walked hand in hand.

Ingrid, 44 – who is best known for her role as Petronella Osgood in Doctor Who – looked sensational in her puff sleeve wedding dress with a mermaid hem. 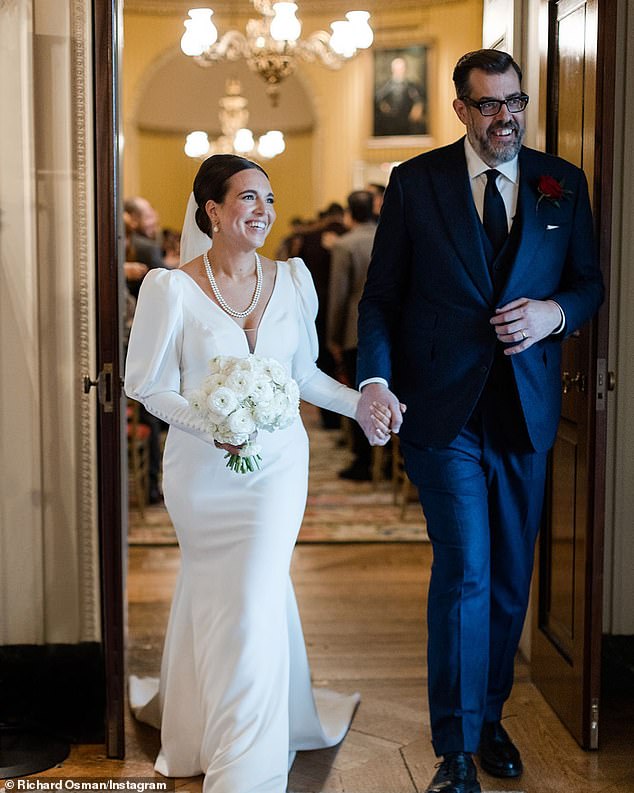 ‘A day of love and laughter’: Richard Osman married Doctor Who star Ingrid Oliver in a ‘magical’ ceremony, sharing a gushing post on Instagram on Monday

Richard looked smart next to her in a fitted navy blue suit with a red rose on his lapels.

He shared with his followers: ‘The most magical, joyful day on Saturday with my beautiful wife. Surrounded by amazing friends and family, a day full of love and laughter. We are so, so happy ❤️❤️

The couple reportedly tied the knot at Goodwood House, the seat of the Duke of Richmond in West Sussex, known for the Glorious Goodwood horse racing meeting and the annual Festival of Speed.

Last month, Richard revealed his marriage would be “very unshowbizzy,” saying: “We’re getting married in December, which is lovely and it’s going to be a non-showbiz wedding, just all our college friends. I can not wait,’ 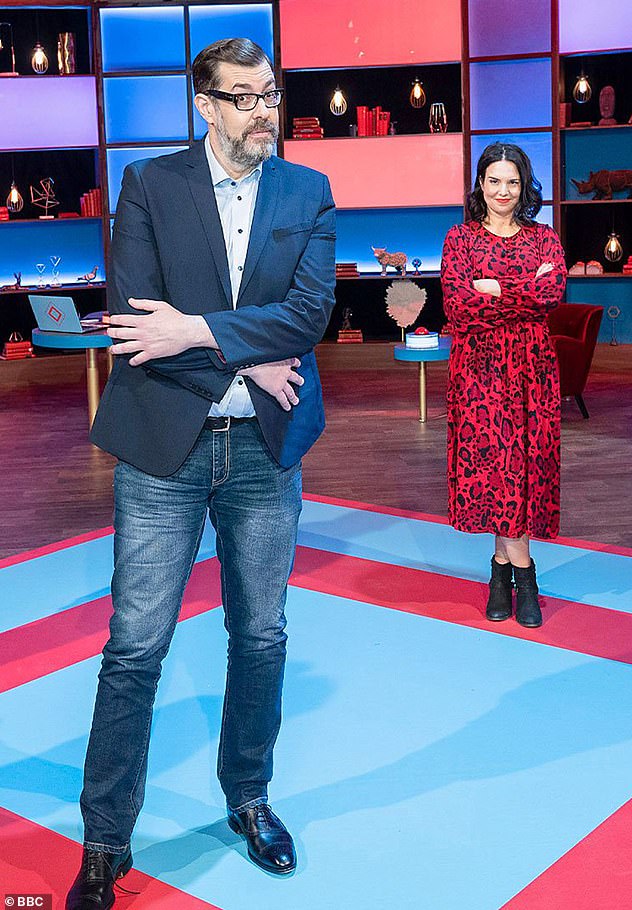 Happy news: They met on the Pointless star’s game show House Of Games in 2020, which pits four celebrities against each other in a series of daily challenges – pictured a year later on the same show 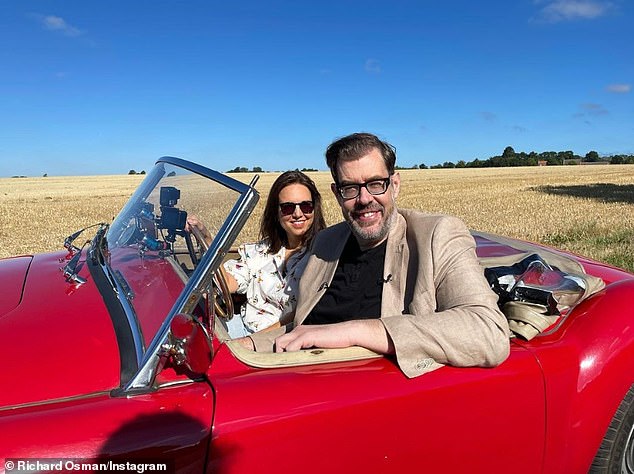 Sweet: They announced their engagement in May after two years of dating, with Richard confirming the news in an interview by saying “exciting, isn’t it?!”

The pair announced their engagement in May after dating for two years, with Richard confirming the news in an interview by saying, ‘exciting, isn’t it?!’

Who is Richard Osman’s new wife?

As the happy couple adjust to married life, we take a look at the life of actress Ingrid Oliver.

They met on the Pointless star’s game show House Of Games in 2020, which pits four celebrities against each other in a series of daily challenges.

Ingrid – the daughter of Conservative MP Jo Gideon – attended the selective Tiffin Girls’ School in Surrey and won acclaim for her BBC sketch show Watson & Oliver with school friend Lorna Watson before winning a role in Doctor Who.

Richard told HELLO magazine about their meeting: ‘Ingrid came on House of Games. I knew who she was through social media. We had never met – I had never met her. I had a little twinkle in my eye, I admit.

“She came on, we filmed that day together. Our first date is entirely on camera. After filming I thought, “How can I ask her for a drink, this is hard.”‘

Appearing on the Christmas Day edition of Desert Island Discs last year, he said, “I’m happy with myself, I have these beautiful children, I’ve met the woman I’ll be with for the rest of my life.” 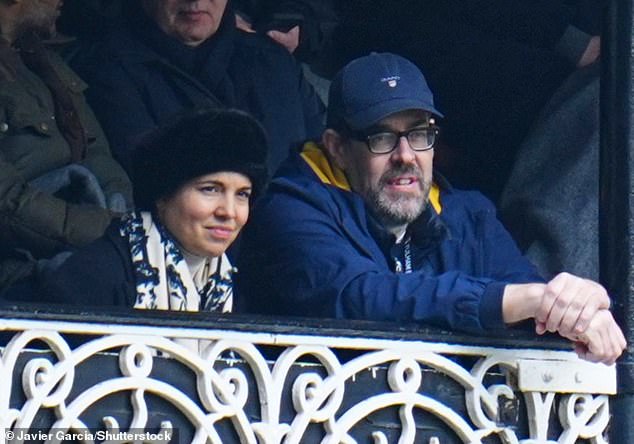 Richard previously said, “I’m happy with myself, I have these beautiful children, I’ve met the woman I’ll be with for the rest of my life.” The couple will be photographed in March. 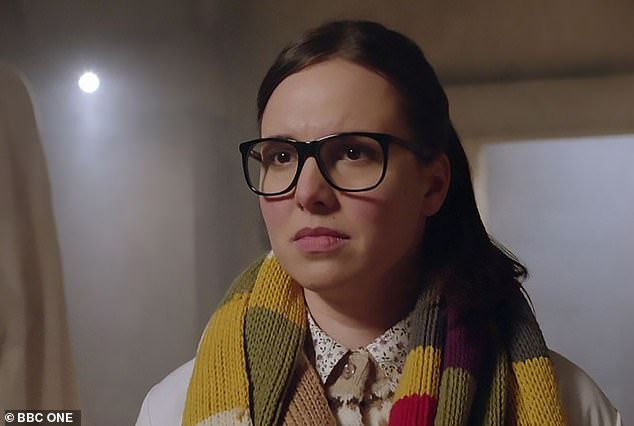 One to watch: Ingrid is best known for her role as Petronella Osgood in Doctor Who

The host finalized his divorce from his former wife in 2007 and has two children with her, daughter Ruby and son Sonny.

Who is Richard Osman’s new wife, Ingrid Oliver? A look into the life of the Doctor Who actress as she tied the knot with the Pointless presenter

Richard Osman married his partner of two years Ingrid Oliver this weekend in a West Sussex ceremony, saying the day was “full of love and laughter”.

The Pointless presenter, 52, started dating his new wife, 44, two years ago after she appeared on his BBC show House Of Games.

While Richard is best known for his quiz shows, comedian appearances and novels, Ingrid has starred in hits such as Doctor Who and is one half of the comedy double act Watson & Oliver.

And as the happy couple adjusts to married life, we take a look at the life of actress Ingrid.

How did Ingrid become famous?

Ingrid rose to prominence as one half of comedy double act Watson & Oliver with boyfriend Lorna Watson, after the duo met at school.

The pair have performed a number of sold-out shows at festivals such as the Edinburgh Fringe.

Turning to acting, the beauty has had a number of cameo roles in many British classics throughout her early career – with additional roles on shows like Doc Martin and Peep Show. 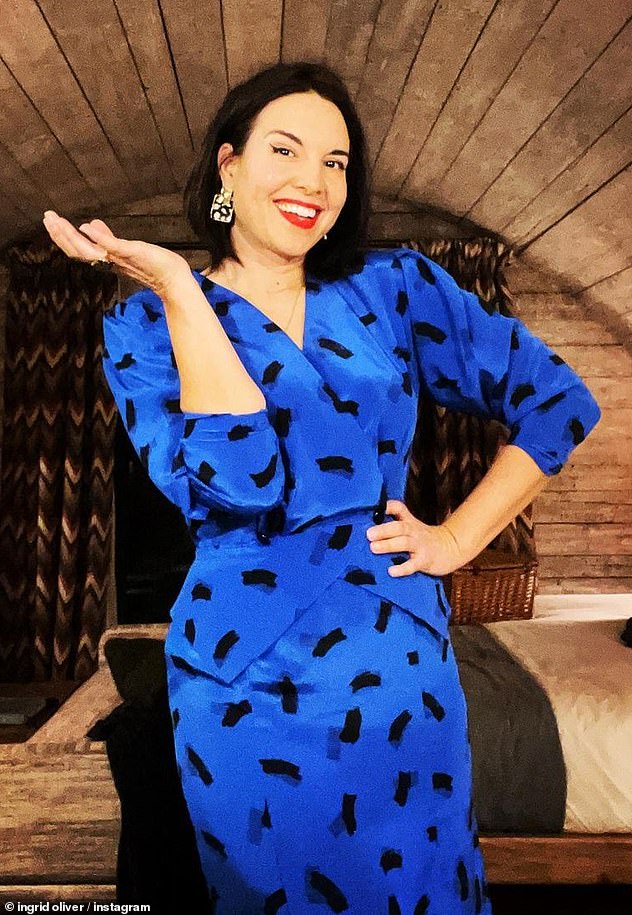 Who is Ingrid Oliver? MailOnline takes a look at the life of the Doctor Who actress as she adjusts to married life with new husband Richard Osman

She then appeared as Miss Stamp in 2008’s chick-flick Angus, Thongs and Perfect Snogging, before playing the character of Petronella Osgood in the 2013 Doctor Who’s The Day Of The Doctor episode.

Ingrid reprized this Doctor Who role a year later in three more episodes of the iconic show.

And when she made the transition from TV to the big screen, Ingrid landed a role in the 2019 Hollywood movie The Hustle, starring Anne Hathaway and Rebel Wilson as leading ladies.

She played the role of Inspector Brigitte Desjardins in the film and was tasked to play a French accent for the part. 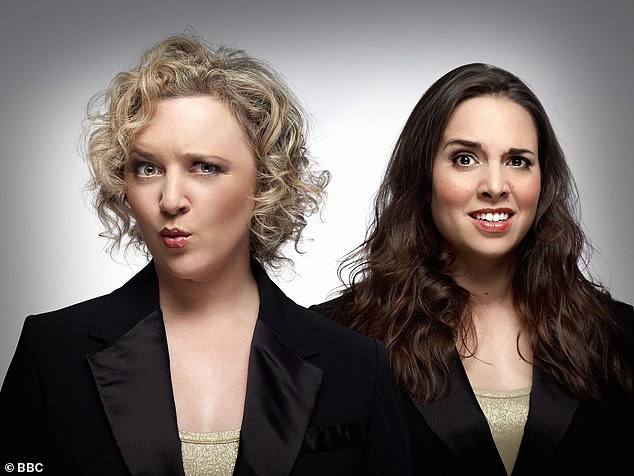 Double act: Ingrid rose to fame as one half of comedy double act Watson & Oliver with boyfriend Lorna Watson, after the duo met at school

How did Ingrid meet Richard?

Actress Ingrid started dating her now-husband after appearing on his quiz show House Of Games.

The TV show sees a group of four famous faces compete against each other to test their knowledge in a series of fast-paced game rounds.

And in May of this year, the host confirmed to The Guardian that he was engaged to Ingrid after a plethora of rumours.

When asked if he was getting married during the interview, Richard replied: ‘Yeah, exciting, huh?!’ 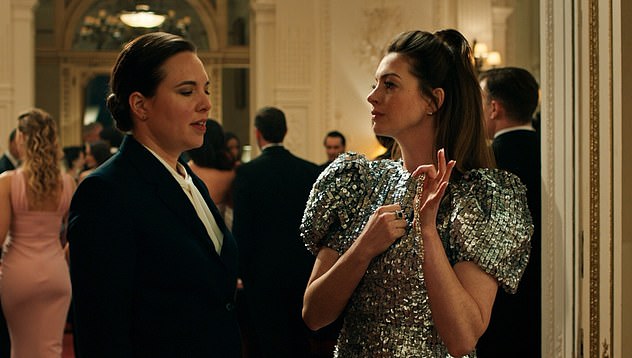 On screen: Ingrid landed a role in the 2019 Hollywood film The Hustle, playing Inspector Brigitte Desjardins in the film

Where does she live?

Ingrid was born in London to a British mother and a German father.

And the star is said to have moved into Richard’s home in southwest London in October after they began dating.

Richard renovated the house in 2021 and kept his social media followers updated as he shared snaps of the process.

After the decoration, the beautiful house now features an American style pool table, a modern monochrome bathroom and wooden floors. 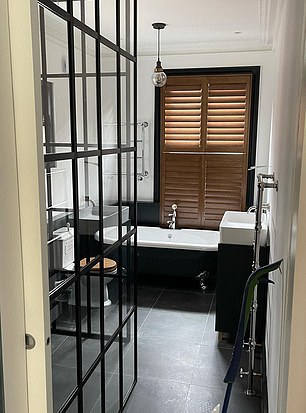 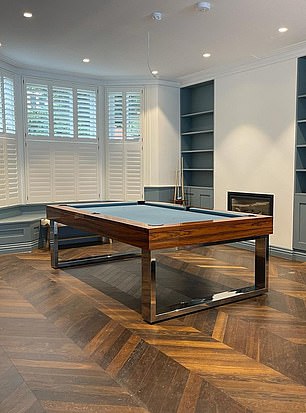 House: Ingrid is said to have moved into Richard’s house in southwest London, which he recently renovated, in October after they started dating

What do we know about Ingrid’s relationship history?

While little is known about the actress’s private life before Richard, she seems to have kept past relationships a low profile.

Despite having no children of her own, Ingrid’s new husband shares now grown children Ruby, 24, and Sonny, 22, with his ex-wife. 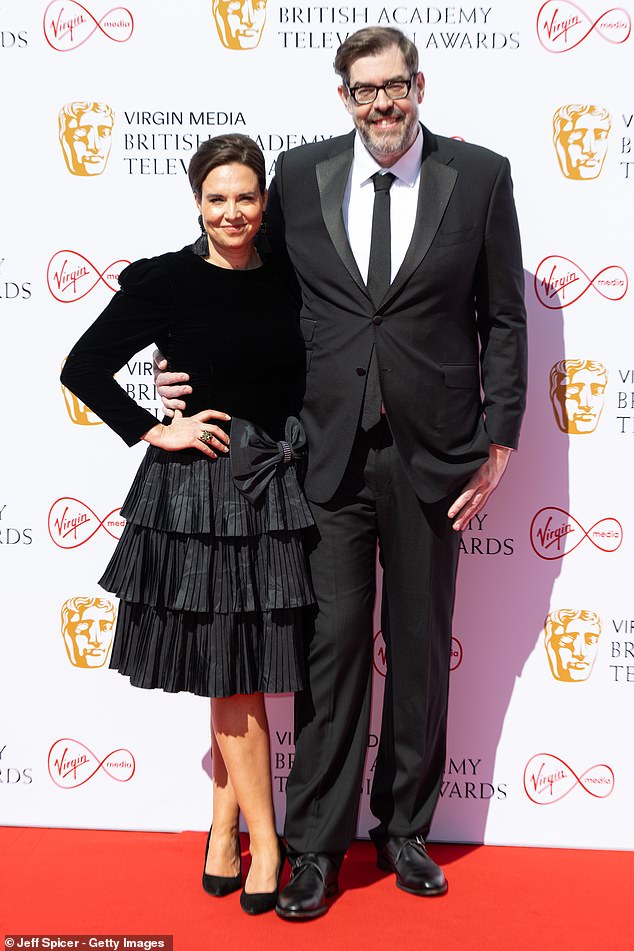 Family: Despite having no children of her own, Ingrid’s new husband now shares adult children Ruby, 24, and Sonny, 22, with his ex-wife

Does she have social media?

Ingrid posts regularly on Instagram, keeping her 9.7K followers up to date with work and life behind the scenes.

On Monday, she shared a photo from her gorgeous wedding day — as she and Richard walked hand in hand like a new bride and groom.

And the star has a much bigger profile on Twitter, where she has 47.6K followers and tweets updates often. 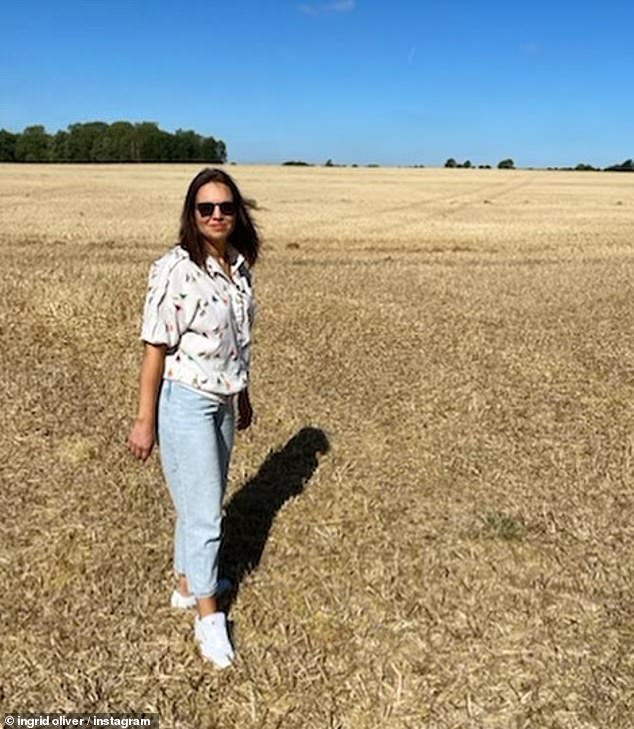 On the grid: Ingrid posts regularly on Instagram, keeping her 9.7K followers up to date with behind-the-scenes work and life

Schools scramble to plan a strike as unions tell members to…