Australians are being “morally shamed” into voting for an Indigenous Voice in Parliament, argues a Conservative columnist.

Peta Credlin, Liberal Prime Minister Tony Abbott’s former chief of staff, said the proposed Voice will be a race-based body that is more about “power than recognition,” but that’s not how it’s being sold.

“Voters will be presented in overly simplified terms: for or against Aborigines,” Credlin wrote in the australian.

Peta Credlin argues that Voice of Parliament supporters are trying to “morally shame” Australians into voting for it.

The Voice is a proposed body of representatives of Australia’s First Nations peoples that will advise the federal parliament on matters relating to indigenous peoples.

Its creation will require a change to the Australian Constitution to be introduced through a successful referendum.

As an example of ‘oversimplification’, Ms Credlin pointed to the launch this week of what she called the ‘big business’ campaign to vote ‘yes’, which is backed by the Uluru Declaration Group.

The spot features Indigenous playwright and actor Trevor Jamieson telling rapt children the hopeful story of how the First People are allowed to “have a say” in matters that affect them, something they haven’t had.

“Children’s talk around a feel-good campfire is a sign of things to come,” Ms. Credlin wrote of the minute-long commercial, which will be aimed primarily at online audiences.

She pointed out that for previous referendums, the federal government had funded campaigns for both yes and no votes, but Ms. Credlin doubted the Albanian government would do so this time.

“Workers will rely on big corporations to inundate us with the Yes message and hope, without the millions to match them, that no one will pick up the No side’s arguments,” he said.

Ms. Credlin accused those pushing for a Voice of being deliberately vague about what the body will do.

Ms Credlin argues that the Albanian government relies on big business to finance the yes campaign, as in this image from the online ad launched last week, as she hopes the no arguments will be drowned out.

‘The voice has to make a difference or what’s the point of having it?’ she wrote.

“However, that difference cannot be explained without almost certainly dooming her to defeat, hence the lack of details.”

Ms. Credlin believed that indigenous peoples already have a substantial voice in the nation’s affairs, noting the number of parliamentarians who identify as indigenous.

Do you agree with Peta Credlin that Voice of Parliament campaigners are trying to “morally shame” Australians into voting for it?

‘Why establish a separate indigenous voice in parliament when it already includes 11 individual indigenous voices who were elected in the usual way, without any affirmative action or race-based selection criteria?’ she wrote.

‘Why give one group of people, based on race, a special voice over the actions of our parliament and our government that is denied to everyone else?’

He argued that the Voice was really an attempt to seize power.

“There are plenty of reasons to be cautious about entrenching in our Constitution a race-based body that even Malcolm Turnbull once described as a third chamber of parliament,” he wrote.

‘It’s easy to see where this could end: down the road of co-governance.’

Mr. Albanese has indicated that the model depicted would form the basis of the Voice design and would be refined as the discussion evolved.

Ms Credlin said the Voice had not really been ‘thought through’ and that the danger was that Australians would be morally embarrassed to vote for a ‘race-based’ ‘vibe-based’ Voice.

“A couple of decades ago, we would have marched in the streets for a body based on race in our Constitution,” he wrote.

“Now they tell us that we are almost racist if we don’t support it.”

Will Australians vote for an Indigenous Voice in Parliament?

A survey by the Australia Institute in July found strong support for adding Voice to the Constitution.

The poll found that 65 percent would vote yes, up from 58 percent when the same poll was taken in June.

About 14 percent said they would vote no, and the other 21 percent were undecided.

Support was highest among Green voters, but even 58 percent of those aligned with the Coalition would vote for it. 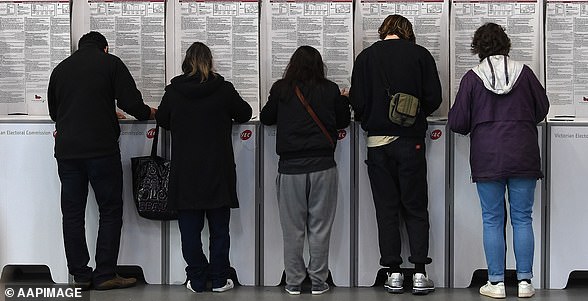 Some 59 percent of One Nation voters would vote yes, even though its leader, Pauline Hanson, leads the charge against her. This was an increase from 35 percent in June.

For a referendum to succeed, a majority of states must also vote yes, but the poll showed that was easily covered as well.

The four largest states had comfortable majorities with Victoria at 71 per cent, Queensland at 66 per cent, WA at 63 per cent and NSW at 62 per cent.

Support was highest at 85 per cent for Australians aged 18 to 29, but those over 50 were still above 50 per cent yes.

Prime Minister Anthony Albanese has indicated that the Voice referendum question is likely to be: “Do you support an amendment to the Constitution establishing an Aboriginal and Torres Strait Islander Voice?”

Three lines would be added to the Constitution to create the advisory body; one stating that he can ‘make representations to parliament’ on issues relating to indigenous Australians; and that Parliament can legislate how it works.

Polls in July indicated that Australians strongly support the Voice of Parliament with 65 per cent of those polled saying they would vote for it.