Another reason NOT to work from home? People who travel regularly have better mental and physical health, study shows

It can be tempting to log into work from your bed each morning instead of commuting to the office if that’s an option.

But a study has suggested that people who fall into this pattern are less likely to be in good physical and mental health.

Those who regularly traveled more than 15 miles from home were less likely to experience loneliness or mobility problems than those who lived at home.

The University College London scientists who conducted the study say travelers are more likely to catch up with friends and family and visit new places. 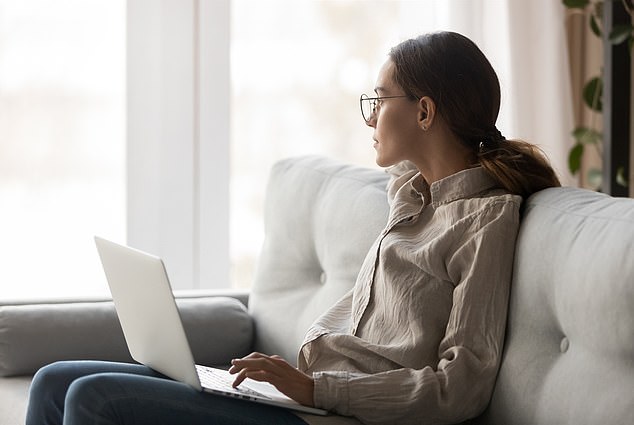 People who work from home are less likely to be in good physical and mental health, study suggests

The researchers recruited 3,014 people aged 18 to over 75 living in the northern parts of England in January 2019.

Participants were surveyed on how often they commuted to work, the distance they traveled and how they got to the office.

They were also asked to rate their health from one to five, with five being very good and one being very bad.

This was self-reported and the scientists did not ask them to present evidence of poor health or diagnoses they had.

The results showed that people who traveled less were more likely to report poor or very poor health.

Not getting enough physical activity increases your risk of diseases like obesity, high blood pressure and type 2 diabetes, according to the Centers for Disease Control and Prevention (CDC).

This puts people at risk for a myriad of other diseases, including heart disease, stroke, and early death.

Lead author Dr Paulo Anciaes, from UCL, said: “We explored the links between limitations on traveling more than 15 miles from home, demographics and location, and social involvement in how residents perceive their own health.” .

‘We found that the key variable is the number of different places people visit outside their local area. This is related to greater social participation and better health.’

Taking responses by age group into account, the scientists found that people over the age of 55 who rarely ventured outside their hometown were at the highest risk of negative health impacts.

They said the lack of regular visits to new places left the age group at higher risk of lower social participation and loneliness, linked to lower levels of general health.

Dr Anciaes said: “In the North of England, rural and suburban areas with limited access options are more likely to experience population loss as young people move to cities in search of work and good employment options. travel”.

“Meanwhile, older generations are left behind in these areas with limited transportation options. The variety of places they can visit is low, leading to lower social participation and lower levels of general health.

‘The results of this study emphasize the need for public policies that reduce travel restrictions in the region, providing better public and private transportation options that allow for more frequent and longer trips.’

The study was published in the research journal Transportation and Health. It was supported by funds from Transport for the North, a government transport body in the UK.

The US authorities introduced the WFH for federal agencies in early 2020, when the virus was starting to take off.

Many agencies have yet to relax these rules, even though Covid vaccines and boosters are now available.

A report last month showed that eight out of ten Centers for Disease Control and Prevention (CDC) workers are still working from home.

A staff member warned that the current situation made it “almost impossible to do anything”.

A report published late last year also warned of the risks of working from home, saying that two-thirds of those under 30 in Britain had suffered on the “back of the WFH” from the practice.

Covid fans plead for people to start meeting up with their friends and lovers outside or online in the UK as cases rise.

Vote in the DailyMail.com poll on which, if any, Covid-era measures should return this winter.

Eight out of 10 CDC workers are STILL working from home

Most Centers for Disease Control and Prevention (CDC) employees are still working from home.

The federal health agency, in response to a Freedom of Information Act (FOIA) request, said 80 percent of staff were still working partially or fully from home.

Dr. Stephen Cochi, who worked at the CDC for four decades before retiring this year, warned that remote work made it “almost impossible to do anything.”

The CDC first moved to remote work in March 2020 to reduce social contacts and limit the spread of Covid.

In August this year, the agency lowered its quarantine recommendation for Covid cases from 10 to five days, saying a shorter time would help keep more people in offices.

Yet four months later, the CDC has yet to reverse its own telecommuting plans.