An Orthodox Jewish group has launched a campaign against The New York Times criticizing the paper for its investigative coverage of the city’s private yeshiva schools in recent months.

The group Agudath Israel of America has put up at least three billboards in Manhattan accusing the newspaper’s investigation of threatening their way of life and calling the articles “misleading and one-sided depictions” of their community.

A billboard near the Lincoln Tunnel in Manhattan asks the New York Times to “stop targeting” Orthodox and ultra-Orthodox Jews.

The poster claims that The New York Times has published 12 articles against Orthodox Jews in three months. Another section of the billboard reads: “Two anti-Semitic attacks in New York City doubled down.”

In recent months, The New York Times has published a series of investigative articles focused on schools, known as yeshivot, and the community. The articles claim that the school system deprives children of a secular education, exploits public funding, contributes to poverty, and mistreats students.

Times bosses have defended their reporting, with one school highlighted since it was fined $8 million for corruption. 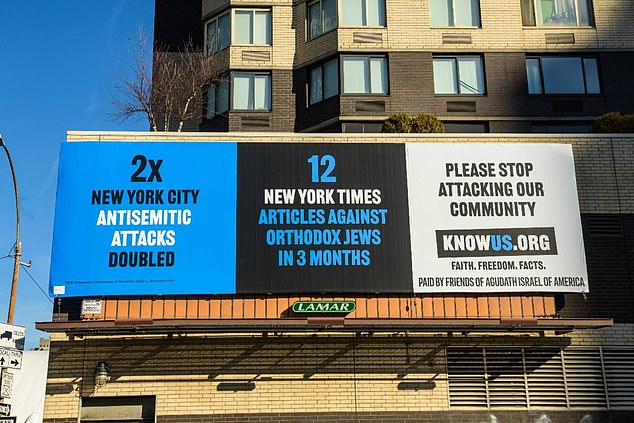 A group of Orthodox Jews has launched a campaign against the New York Times criticizing the paper for its investigative coverage of the city’s private yeshiva schools. In the photo, a billboard near the Lincoln Tunnel in Manhattan. 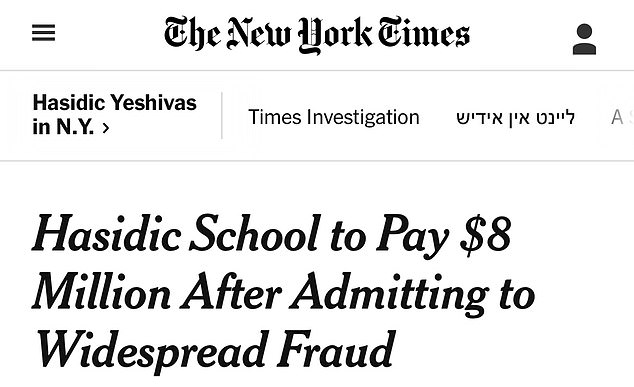 The group Agudath Israel of America claims the newspaper’s investigation threatened their way of life, calling the articles “misleading and one-sided depictions” of their community.

“They hold our way of life in great contempt – everything from the way we raise our children, to how we handle marriages, divorce and custody disputes, and even the way we support our families while holding on to our faith. and traditions,” the group stated.

The campaign aims to highlight the growing violence against Jews in New York, stating that: ‘A major newspaper launching a campaign against a minority group is always wrong. In this climate, it is deeply worrying.

The New York Times investigation found that local yeshivot deprive students of a secular education and that all 1,000 students failed standardized tests in reading and math.

Published stories also reported that some students in the yeshivas had been subjected to physical abuse by unqualified teachers, while the yeshivot had received more than $1 billion in federal, state and local taxes over the past four years. 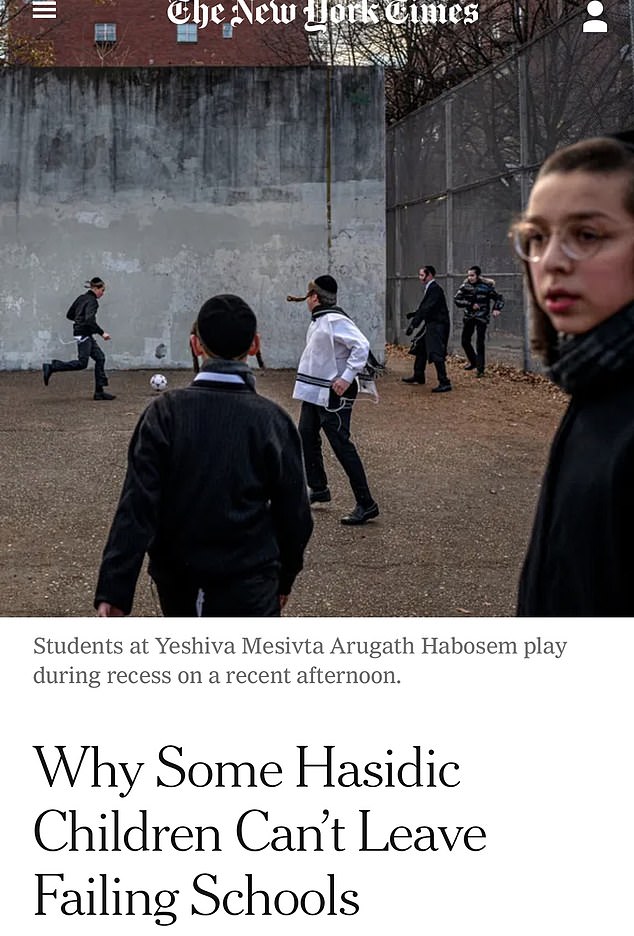 Published stories reported that some students in the yeshivot had been subjected to physical abuse by unqualified teachers, while the yeshivot had received more than $1 billion in federal, state and local taxes over the past four years. 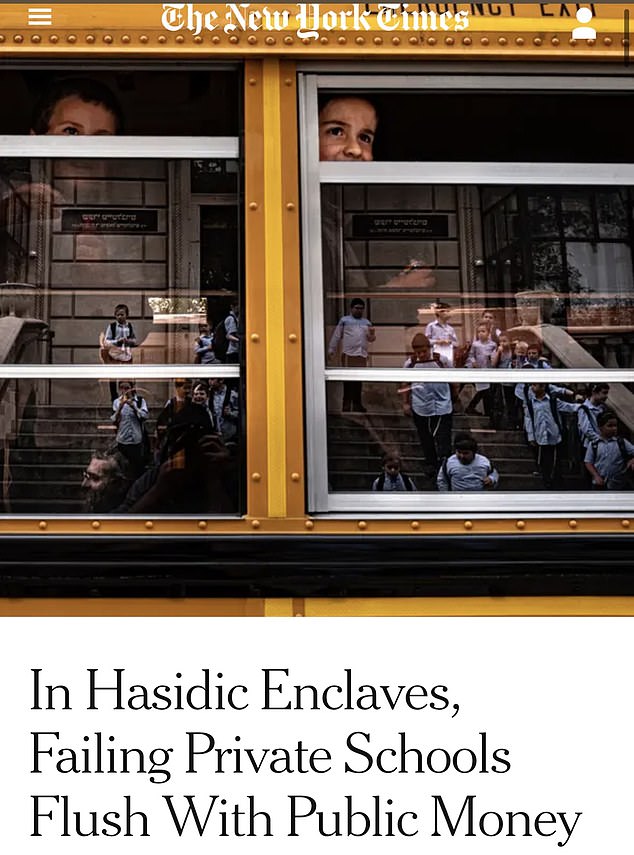 Rabbi Yitz Frank, director of Agudath Israel in Ohio, called the Times’ reporting “unfair and in many cases biased.”

‘It creates a negative tone about our community among the public. That is what worries us,” she said.

According to The times of Israel Agudath claimed that the yeshiva system actually saves public funds overall because parents pay tuition while paying taxes and it has lower abuse rates than public schools.

After the first Times story ran, the Central United Talmudic Academy in Williamsburg, Brooklyn agreed to pay fines and restitution totaling more than $8 million for paying teachers off the books and seeking refunds for student meals. which he never actually provided, the reported the Religious News Service. 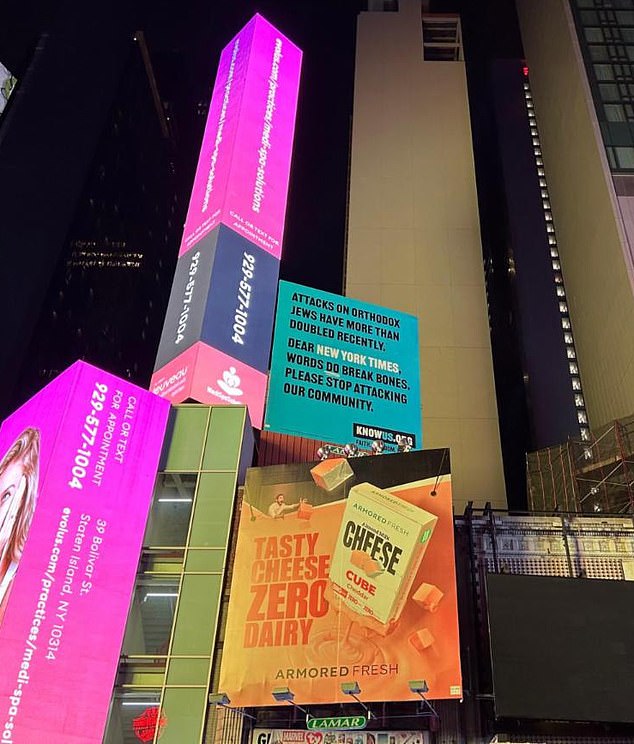 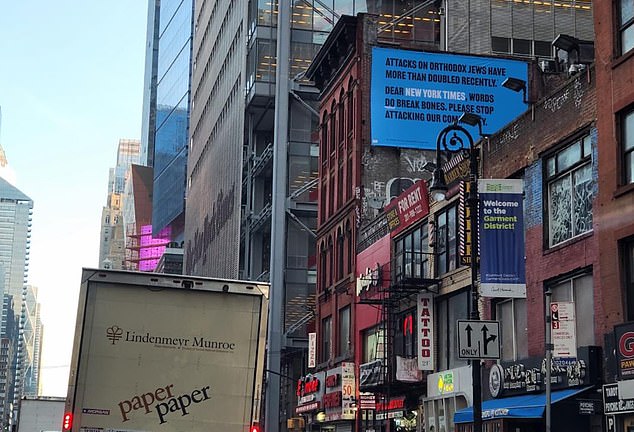 Another billboard was placed at 620 Eighth Avenue outside the New York Times building. 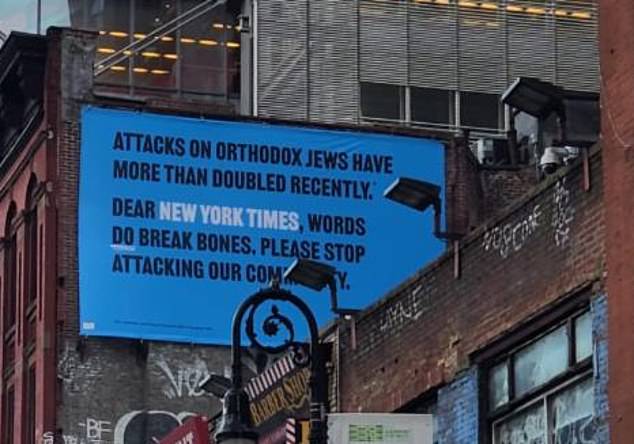 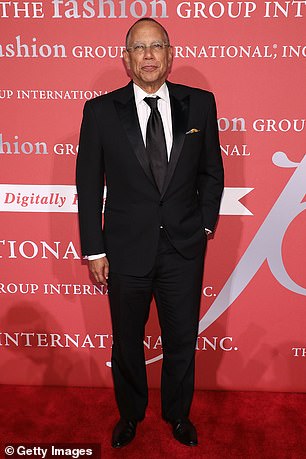 A Times spokesperson told the outlet that he was confident in the accuracy of his reporting.

Our reporters have spent months trying to help readers understand what’s going on inside some of New York’s lowest-performing schools, speaking with hundreds of parents, students, and educators to explain the inner workings of religious Jewish schools. Hasidics, who receive substantial amounts of public money,’ the spokesman said in an email.

Rabbi David Zwiebel, executive vice president of Agudath Israel of America, claimed that Orthodox Jews have been under increasing anti-Semitic attacks and are now under attack by the ‘document of registration’.

“Orthodox Jews have been under increasing attack on the streets of New York,” Zwiebel said. ‘We are now under assault from “recording paper.”

The time has come to speak, so that our silence is not interpreted as an acquiescence to the normalization of anti-orthodoxy. Hence the urgent need for KnowUs.’

Avrohom Weinstock, Agudath Israel’s chief of staff added that they “don’t understand the New York Times’ obsession with us.”

“We shouldn’t have to put up a billboard in 2023 asking people to stop attacking us. Orthodox Jews, like any minority, should not be ‘other’.