NHS hospitals are running out of OXYGEN

Oxygen supplies are running dangerously low as a side effect of the ongoing NHS crisis, doctors have warned.

The £150bn/year health service is under immense pressure from Covid, flu and bed blockers, as well as the usual winter pressures and staff absences.

Sick Britons have had to be treated outside wards, including in hospital ambulances, corridors, closets and offices, due to lack of space in hospitals.

It means more respiratory patients than ever are relying on portable oxygen canisters, which only hold about 30 minutes of gas, until they are connected to a bed. 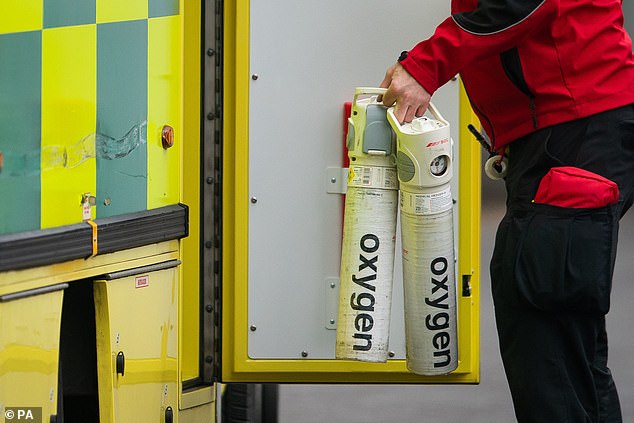 Woking-based BOC, the health service’s main supplier of oxygen canisters, announced it had to ration five types of its portable oxygen. Pictured: An ambulance worker in London with a small BOC oxygen cylinder

For comparison, oxygen is delivered directly to hospital ward beds through a series of pipes.

Woking-based BOC, the NHS’s main supplier of oxygen canisters, announced it had to ration five types of its portable oxygen.

He’s just giving boats to hospitals in exchange for some empties.

“This means we can only supply the same number of cylinders you are returning and any orders placed for more cylinders than are being returned will be adjusted accordingly.”

However, the company insisted that there is no shortage of oxygen, just an increase in demand for its small cylinders.

BOC said it is working with the NHS and Department of Health, encouraging hospitals to use their piped oxygen supplies or larger canisters.

The NHS said it is seeing “significant demand” for portable oxygen due to an increase in patients with respiratory conditions. He urged sick Britons to continue using the NHS as normal.

Health service sources said The Telegraph the supply only covered about half of the demand for hospital boats and ambulances.

Doctors told the newspaper that the situation is putting patients “at risk” because they are forced to ration oxygen or use “poor alternatives”.

Liverpool University Hospitals NHS Foundation Trust announced this week that doctors had to stop treating patients in the corridors due to a lack of portable oxygen.

A message to staff warned that he only had ‘hours’ of supplies left and urged staff to move patients to wards to ensure they had access to oxygen.

East of England Ambulance Service Trust, along with South East Coast Ambulance and East of England, have told staff to carefully manage supplies due to increased demand.

East of England has also suggested that some elderly patients with an oxygen saturation between 92 and 94 percent may not need oxygen unless their level is lower than normal, he added.

An NHS worker from the south-west told the Sunday Times: “We are now at the stage where there is not enough oxygen in the cylinders to treat patients in corridors, ambulances and in our emergency room.”

The UK Physicians Association said supply problems, which were rare even during the darkest days of the pandemic, are now “a common occurrence”.

Some hospitals warn that the demand for oxygen, which has been in short supply since Christmas, is greater than during the first wave of covid-19, considered one of the worst for hospitals.

Dr Matt Kneale, co-chairman of the organisation, told The Telegraph: “We have heard about the oxygen shortage from a number of doctors in different regions.”

The situation has forced doctors to “throw” patients out of beds and into corridors as more sick patients needed the same.

“Today, we did this so that a patient could die anywhere but in a corridor,” he said.

Dr Adrian Boyle, president of the Royal College of Emergency Medicine, told the paper: “These are people being treated in inappropriate areas, trapped in corridors and in the back of ambulances.”

‘There is no problem with piped supplies, this is where patients have to receive treatment.

“It’s another illustration of our inability to give people the care they need.”

Dr. Boyle has warned that up to 500 patients die each week due to current backlogs in emergency care.

In other health news…

Britain’s broken NHS: Crying granny begs family to let her die after waiting 33 hours on tram and man ‘sleeps on floor after day in ambulance’ as trusted bosses consider dealing to patients in SHOPS to cope with the desperate situation

Injection once a month could relieve pain in arthritic knees: more than 600 people with osteoarthritis of the knee are participating in clinical trials of the drug

Brown noise: How the constant hum of a jet engine could cure your insomnia

The secret to living longer: Avoid inflaming your body and suffering from premature…

How a pre-wedding diet led to an eating disorder