A woman has sparked a lively debate online after suggesting that men are increasingly using female-only spaces.

The anonymous poster, believed to be based in the UK, increased Mumsnet to ask others for their opinion on the subject.

In her post, she outlined two incidents over the past month in which she encountered men in places designated for women.

She wrote, “I went to a feeding room to breastfeed my daughter in a mall. I walked in and there were two young women changing their babies and one of their boyfriends just took up one of the few chairs that was just sitting there, sitting with his phone. 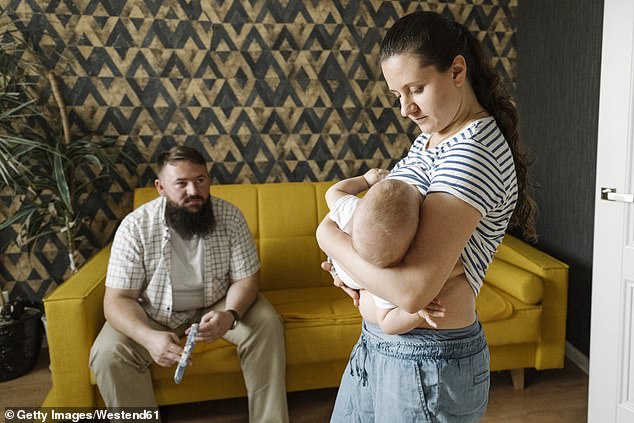 A woman has sparked a debate after asking if it’s unreasonable not to want men in women’s areas, such as breastfeeding rooms (stock image)

‘It’s a small room with 3 chairs in it. I didn’t know what to do so I thought I’d just sit down and get ready slowly and hopefully they go away.

“I’ve eaten in public but this was a small room so I felt vulnerable and like he shouldn’t be there and I didn’t want to lift my top when he was actually sitting across from me.” So I finally asked if he could leave the room, they looked annoyed but luckily he went, after she looked at him and said “It’s up to you”…

“I went into a dressing room in a store with my mother the other day, imagine a large room with chairs in the middle and curtains on the outside.

‘My mom was just trying on cardigans, so she really just needed a mirror, but in the middle of a chair was a boy about 17/18 years old. His girlfriend was trying on clothes. I could not believe it! 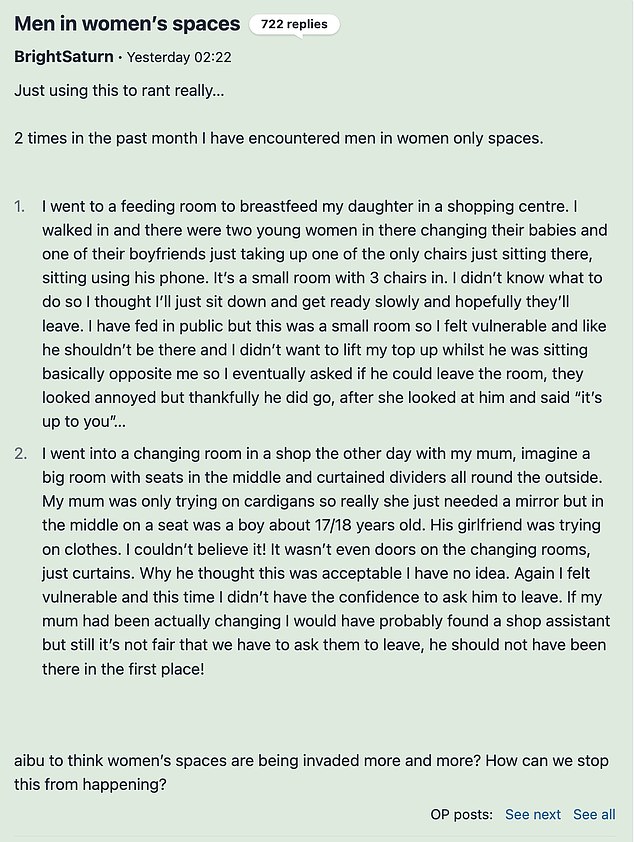 In her post, the anonymous woman discussed two recent situations where men used spaces that she said should only be used by women

“It wasn’t even doors in the changing rooms, just curtains. Why he thought this was acceptable I have no idea. Again I felt vulnerable and this time I didn’t have the confidence to ask him to leave.

‘If my mum had changed I probably would have found a shop assistant, but still it’s not fair that we have to ask them to leave, he shouldn’t have been there in the first place!

“Am I unreasonable to think that women’s spaces are increasingly being invaded? How can we prevent this?’

While many respondents were sympathetic, others disagreed with her point of view. 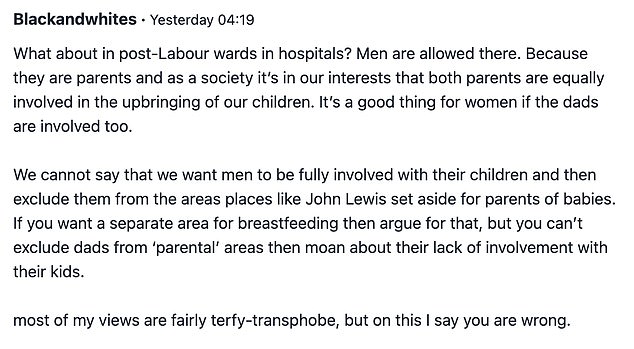 One respondent says: ‘My husband accompanied me to the feeding areas when my youngest was small. I would feed and then he would change him, I was a little uncomfortable eating in public to begin with so he was my dinner. He was a big supporter of all women feeding, so I shouldn’t think anyone would be uncomfortable.”

Another added: ‘We can’t say we want men to be fully involved with their children and then exclude them from the areas that places like John Lewis have reserved for parents of babies. If you want a separate area for breastfeeding, advocate for it, but you can’t exclude fathers from ‘parental’ areas and then whine about their lack of involvement with their children.’

For some Mumsnet users, it wasn’t a problem that the men were in the breastfeeding room or in the changing room

And a third wrote, “I’m getting terribly tired of the trope that we’re all potential victims all the time.

“If the feeding area was in use, wait ten minutes for it to be empty. It didn’t sound like they would last long. Of course men can go somewhere and feed/change their children.

“Men in a fully communal dressing room would be a problem, if there are curtains and he’s clearly focused on a woman trying on clothes it’s not a problem.

“There are times when men in a women-only space is a real problem. These are not good examples.”

Meanwhile, other forum users thought the poster was fair and agreed with her point of view

Others, however, agreed with the poster, saying they too would have been uncomfortable with the scenarios she outlined.

One of them wrote: ‘You are not being unreasonable. I feel like the more women stand up for ourselves, the more men use the only power they have to take the p*** and invade our spaces.

It doesn’t help that some women can’t bear to be 2 meters away from Nigel when they have a baby. What does a man need to be in a feeding room or sit next to you while you change a diaper? I think I’d have a panic attack if my space was always taken up by my other half every second of the day!’

A number of forum users felt the same way as the poster, with one saying that women should protect their spaces

Another added: ‘It pisses me off when I see men walking into breastfeeding rooms, frankly they have no business there. Just because Jane needs a handhold while breastfeeding doesn’t mean the other women should be uncomfortable with your presence in a place where they should be most comfortable. It’s the only place some people can eat without covering their baby’s face and pumping.”

And a third agreed, writing, “Men shouldn’t have been there in either situation! You’re right!

“It wasn’t a mixed gender locker room, I would have told the man to leave. There were no staff in the changing rooms at the time. I did it in Next a few weeks ago. He sniffed and so did his wife. But the other women were satisfied.

‘We must protect our female safe spaces!’

My girlfriend moans about her partner she tricked into having kids and I have no pity – should we stay friends?

Violence in the N.F.L.