‘Hostile environment’ is back: Migrants working on the black market face new crackdown to force them out of the country

By Claire Duffin and David Barrett for The Daily Mail

Illegal migrants working in the black market face another crackdown in a return of ‘hostile environment’ controls.

Immigration Secretary Robert Jenrick said the Home Office will use “every available power” to ensure that “only those who are eligible can work, receive benefits or access public services.”

He wants to expand the “hostile environment for illegal migration” led by Theresa May as Home Secretary and paused in the wake of the Windrush scandal.

Mr Jenrick will lead a task force that will monitor bank accounts and jobs and examine how to protect access to rental housing and driver’s licenses.

It will also review legislation to prevent illegal migrants from exploiting the explosion of casual jobs in the gig economy, such as food delivery positions.

It also aims for a 50 percent increase in visits to workshops such as construction and car washes.

Since December 11, raids on such businesses have already risen by 10 per cent to 1,152, resulting in 362 arrests and 92 civil fines for illegal work worth £1.5 million.

In a raid on a construction site earlier this month, immigration officials deployed a video drone to catch runaway illegal workers.

More than 50 agents from the Home Office’s Immigration Enforcement Agency – backed by seven police officers – launched a morning raid on the grounds of a luxury housing estate on the outskirts of Crawley, West Sussex.

A drone equipped with video and infrared cameras was flown overhead as officers entered the site to track the scattering workers.

A 24-year-old Albanian man was arrested after he tried to flee. Checks later revealed he was in the UK illegally, despite having been previously removed from the country. 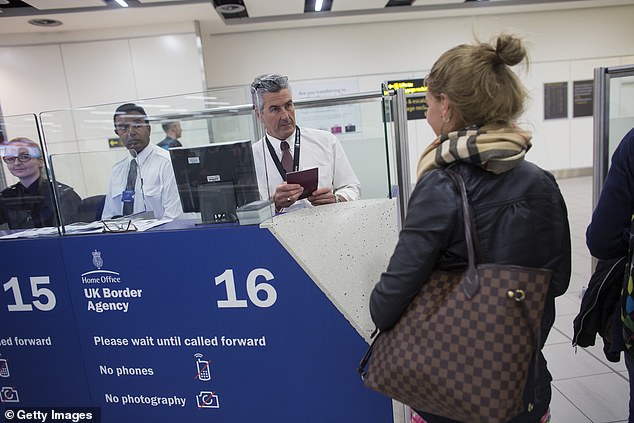 Mr Jenrick said: ‘Our immigration enforcement teams are working around the clock to bring to justice those who break our laws’

The intelligence-led operation came just four months after a similar raid on the same site, owned by Newcastle-based developer Bellway, that led to seven arrests for working illegally.

Bellway said the arrested man had been working for one of their subcontractors.

“Our immigration enforcement teams work around the clock to bring to justice those who violate our laws. Our priority is to crack down on this crime and empower law enforcement to remove illegal migrants.

“With the support of our new enforcement task force, we will move further and faster to prevent the abuse of our laws and borders and crack down on individuals who exploit British taxpayer generosity.”

The Ministry of the Interior is also working with the police to increase their role in cracking down on car washes operating illegally.

Bosses caught employing migrants without the right to work could face fines of up to £20,000 per employee, jail for up to five years, closure of their businesses and disqualification as a director.