Kylie Jenner sported a massive lion head on her black dress as she made a quirky appearance at the star-studded Schiaparelli show at Paris Fashion Week.

The reality star, 25, turned heads with the huge stuffed accessory as she created a storm that came into the venue.

The faux animal was sewn to the front of a chic form-fitting black velvet dress with a stylish strapless design.

Wow! Kylie Jenner wore a massive lion head to her black dress as she made a quirky appearance at the star-studded Schiaparelli show at Paris Fashion Week

Kylie wore a pair of eye-catching gold shoes with eye-catching drag markings and she carried a snakeskin bag.

The beauty wore her dark locks in a sleek ponytail and opted for a typically glamorous makeup look.

The mother-of-two was sure to grab the attention of onlookers with the massive accessory when she arrived at the show. 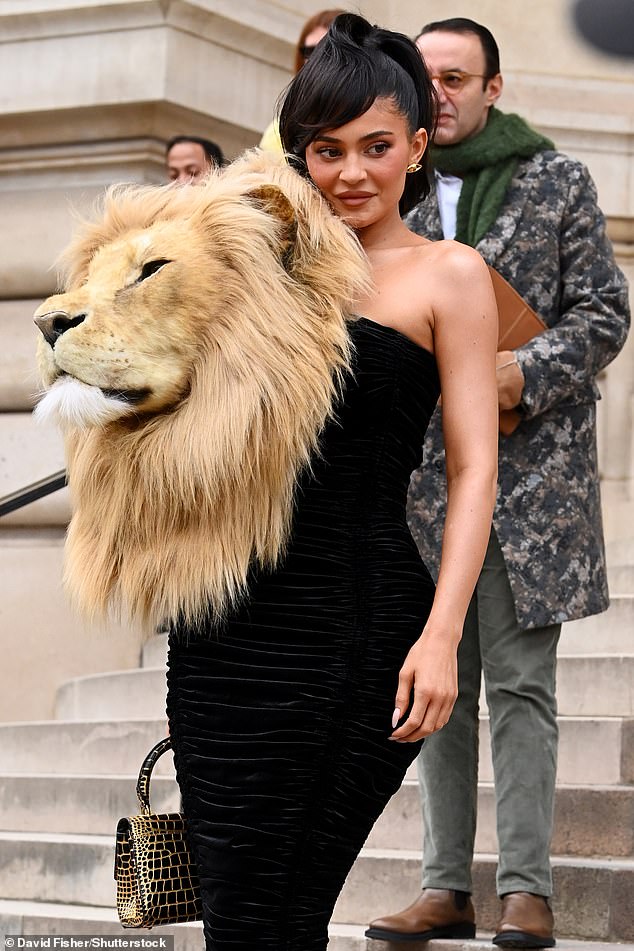 Unexpected: The reality star, 25, turned heads with the huge stuffed accessory as she created a storm that came into the venue 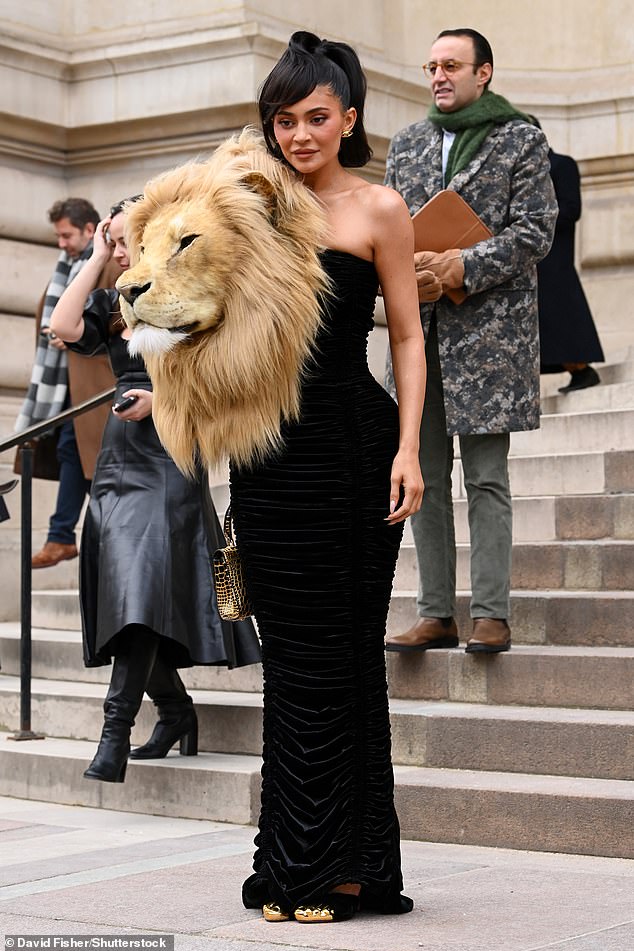 Outfit: The faux animal was sewn to the front of a chic form-fitting black velvet dress with a stylish strapless design

Also on show was Diane Kruger who wore a gorgeous black and white mini dress and beret.

It comes after Kylie revealed on Saturday that her 11-month-old son is now named Aire, which means Lion of God.

The cosmetics magnate and her former partner, rapper Travis Scott, originally named the boy Wolf, but chose to change his name after deciding it didn’t suit his personality. 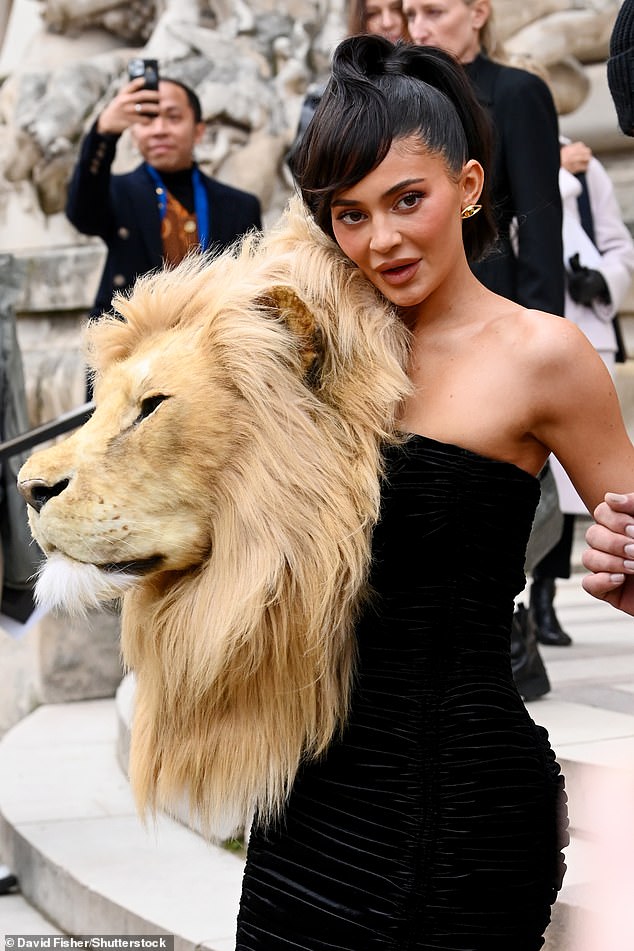 Radaiant: The beauty wore her dark locks in a sleek ponytail and opted for a typically glamorous makeup look 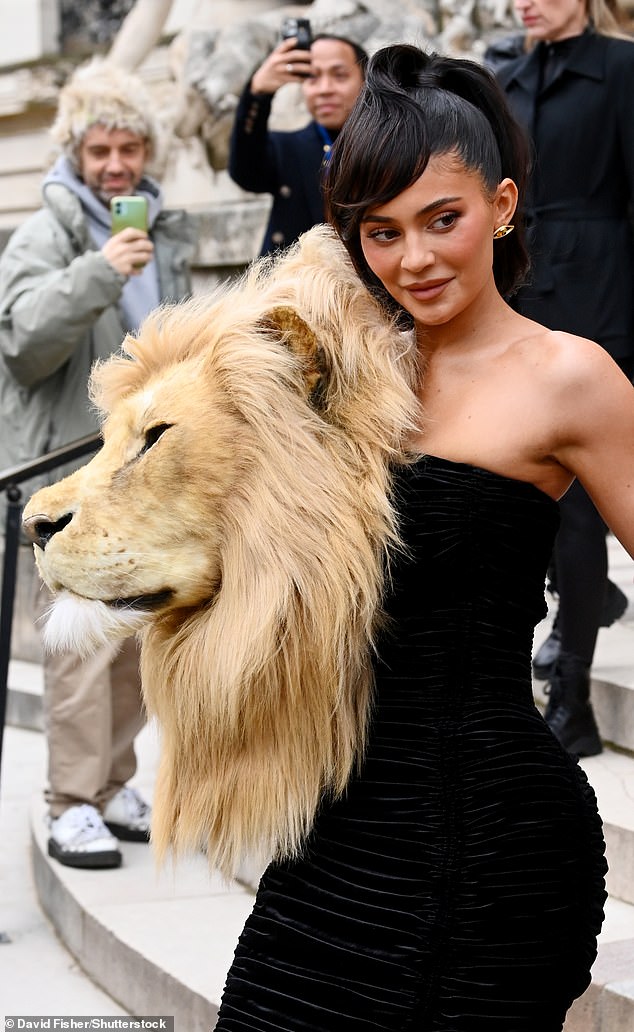 Shock: The mother-of-two was sure to grab the attention of onlookers with the huge accessory when she arrived at the show

Her Instagram post also revealed the adorable child’s face for the first time, and comes just two weeks after she reportedly split from 31-year-old Scott.

The Kardashians star uploaded an Instagram photo series and wrote the simple caption “Aire” to announce her son’s new name to her 378 million fans and followers.

The first photo she shared was an adorable mirror selfie she took while holding her 11-month-old son in her arm. Kylie opted for comfort by wearing a cropped, long-sleeved olive hoodie and matching joggers. 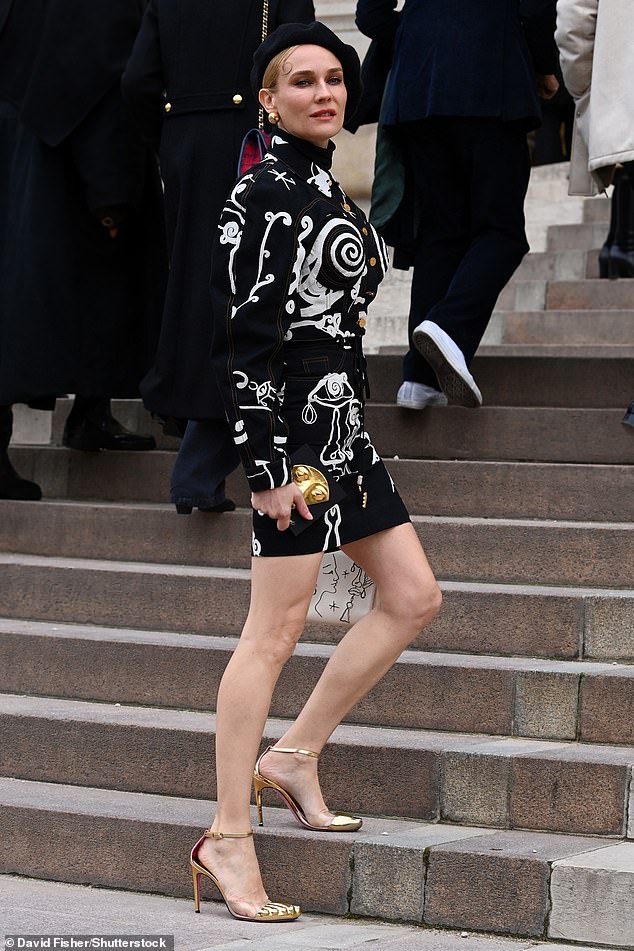 Chic: Also present at the show was Diane Kruger who wore a gorgeous black and white mini dress and beret 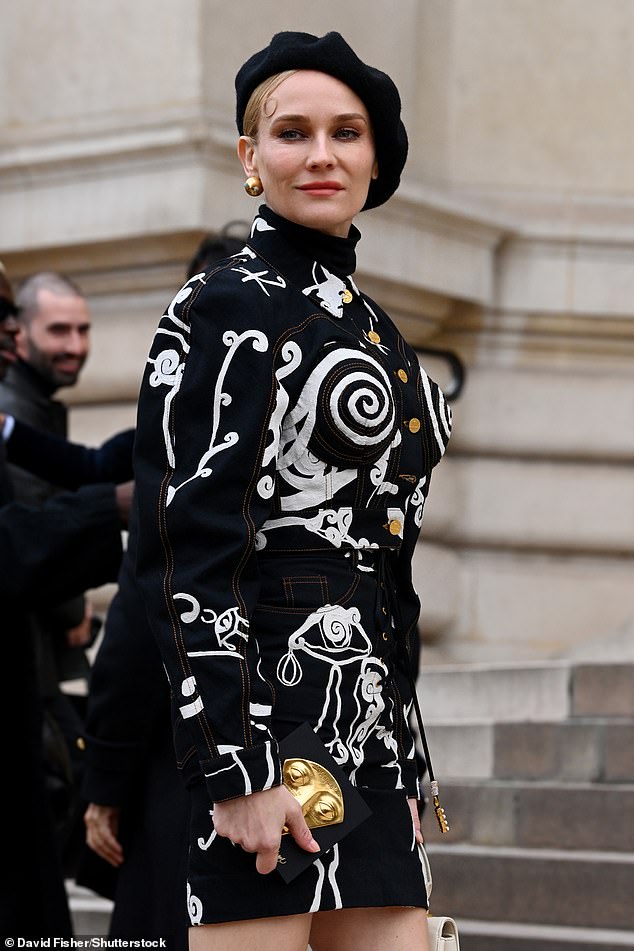 The look: The short denim number featured a swirling white design, as she held a small gold purse

The star’s brunette locks were easily swept back from her face and styled into a messy hairstyle for the day.

Her youngest child was also casually wearing a blue shark ensemble when the TV personality first showed a glimpse of Aire’s face.

The founder of Kylie Cosmetics held her large smartphone partially in front of her face as she took the selfie in what appeared to be a modern and spacious bathroom. 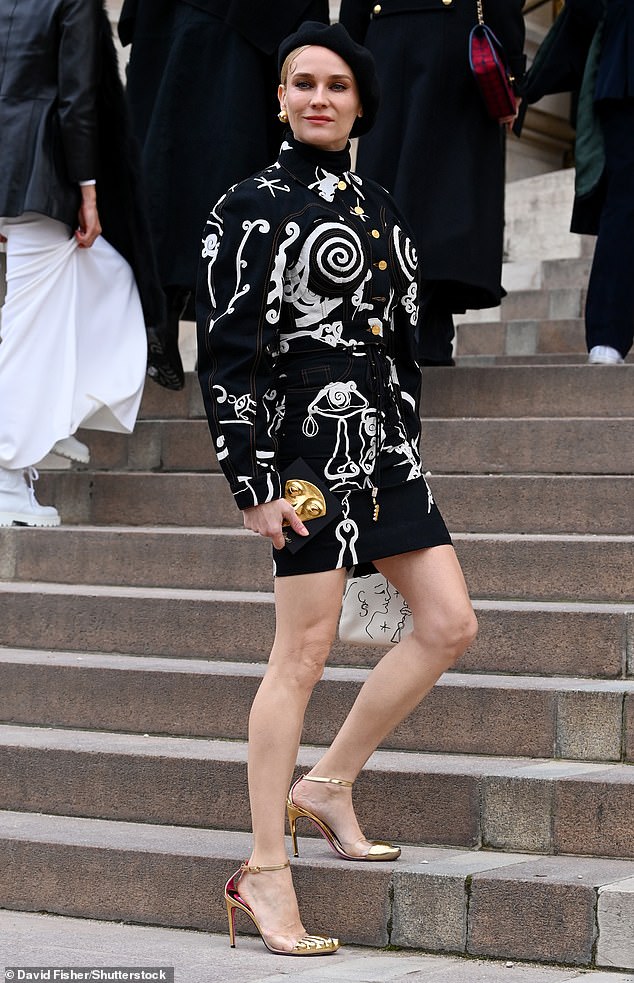 Leggy: She flashed her toned pins in the number and wore the quirky gold shoes once again

The mother-of-two then shared an adorable photo of Aire sitting comfortably on a cream sofa while wearing a stylish black beanie atop his curly locks. He looked up at the photo with one hand balancing on the edge of a laundry basket.

She also uploaded a picture of herself cuddling with her son as he put a happy smile on his face. Kylie, who is also a mom to four-year-old Stormi, whom she shares with Travis, added a vintage filter to the loveable photo. 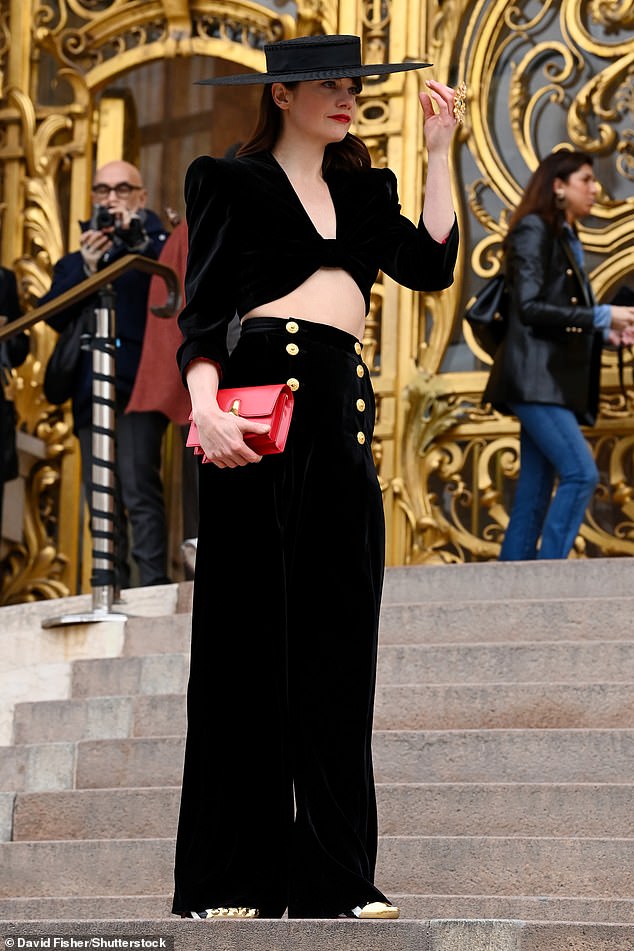 Abs: Rita Wilson showed off her toned midriff in black pants and a crop top

The last photo she added to the series was a close-up of her almost one-year-old sitting in a high chair with a smear of food on his face and bib as warm sunlight streamed in through a nearby window.

She also explained that her son’s unique name is pronounced “sky” under a post on a fan account.

Social media users were quick to respond to the big reveal, including her sister, Khloe Kardashian, who wrote, “The King!!! Young king!!!!!!’

Kylie’s mom, Kris, also shared her own thoughts with her daughter and grandson, writing, “I love you Aire Webster,” followed by a red heart emoji.

A close friend, Hailey Bieber, added a bunch of crying face emojis and typed “Aire angel,” along with another friend, Carter Gregory, who wrote “KING AIRE,” referring to the meaning of her son’s name.

During an interview on The Late Late Show with James Cordon last September, Kylie had hinted at her plans to change her son’s original name, Wolf.

“We haven’t legally changed the name officially,” she had stated on the show at the time. ‘His name is still Wolf. His passport says Wolf, but that won’t be his name. We’ll just wait.’

That’s what a source close to the stars said Entertainment tonight that, ‘The two have had an up and down relationship.’

“And while they’re not together now, it doesn’t mean it’s over for good,” the insider added to the publication. The source then explained the reasoning behind the ‘break’.

“Kylie and Travis live different lifestyles and that has been a big deal. With two kids, Kylie doesn’t go out much. Travis, on the other hand, lives a life of late nights in the studio and hanging out with friends.”

The insider concluded that both the reality star and the rapper will continue to maintain a healthy co-parenting relationship to raise their two children, explaining that “the two love and respect each other…”

While the former couple has had ups and downs with their romance, the two welcomed their daughter in 2018 and their son in 2022 last year. Their children will both turn a year older next month in February.

Kylie has shared snaps of Stormi and Aire on social media in the past, but has not shown her son’s face until now, shortly before his first birthday.

Is HMRC overburdening me with my state pension?

Chelsea ‘will return for Enzo Fernández’ before end of transfer window

Davina McCall, 55, to host ‘Love Island for the middle-aged’ after…