It was a night full of celebrities at Foo Fighters & The Hawkins Family Present’s Taylor Hawkins tribute concert in Los Angeles on Tuesday night.

Power couple Kourtney Kardashian and husband Travis Barker joined Miley Cyrus, Pink, Alanis Morissette and Tommy Lee for a night of music with Joan Jett and others as they bid farewell to beloved drummer Hawkins.

The musician, who worked for decades with the rock band Foo Fighters, died at the age of 50 on March 25, 2022. 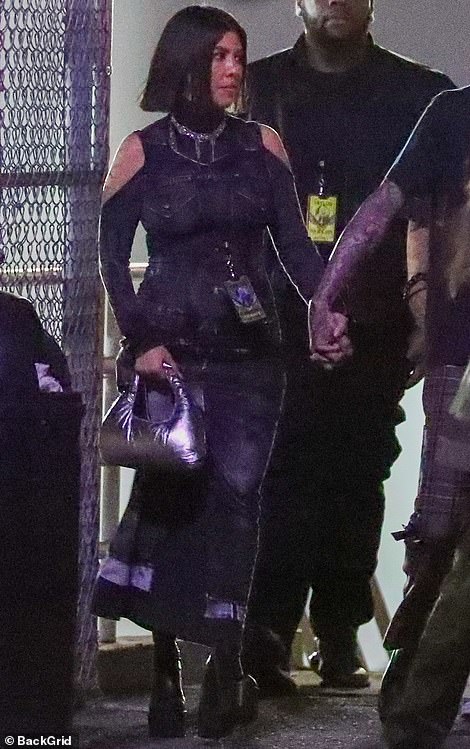 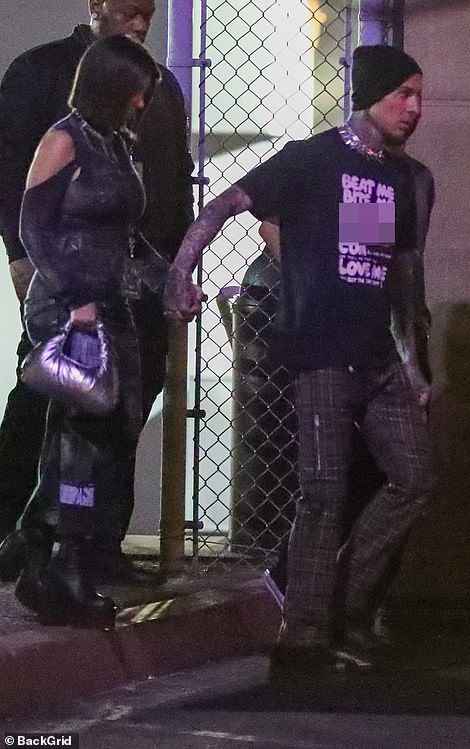 They made the scene: It was a celebrity-studded night for Foo Fighter & The Hawkins Family Present’s Taylor Hawkins tribute concert in Los Angeles on Tuesday night. Kourtney Kardashian and her husband Travis Barker are seen here. 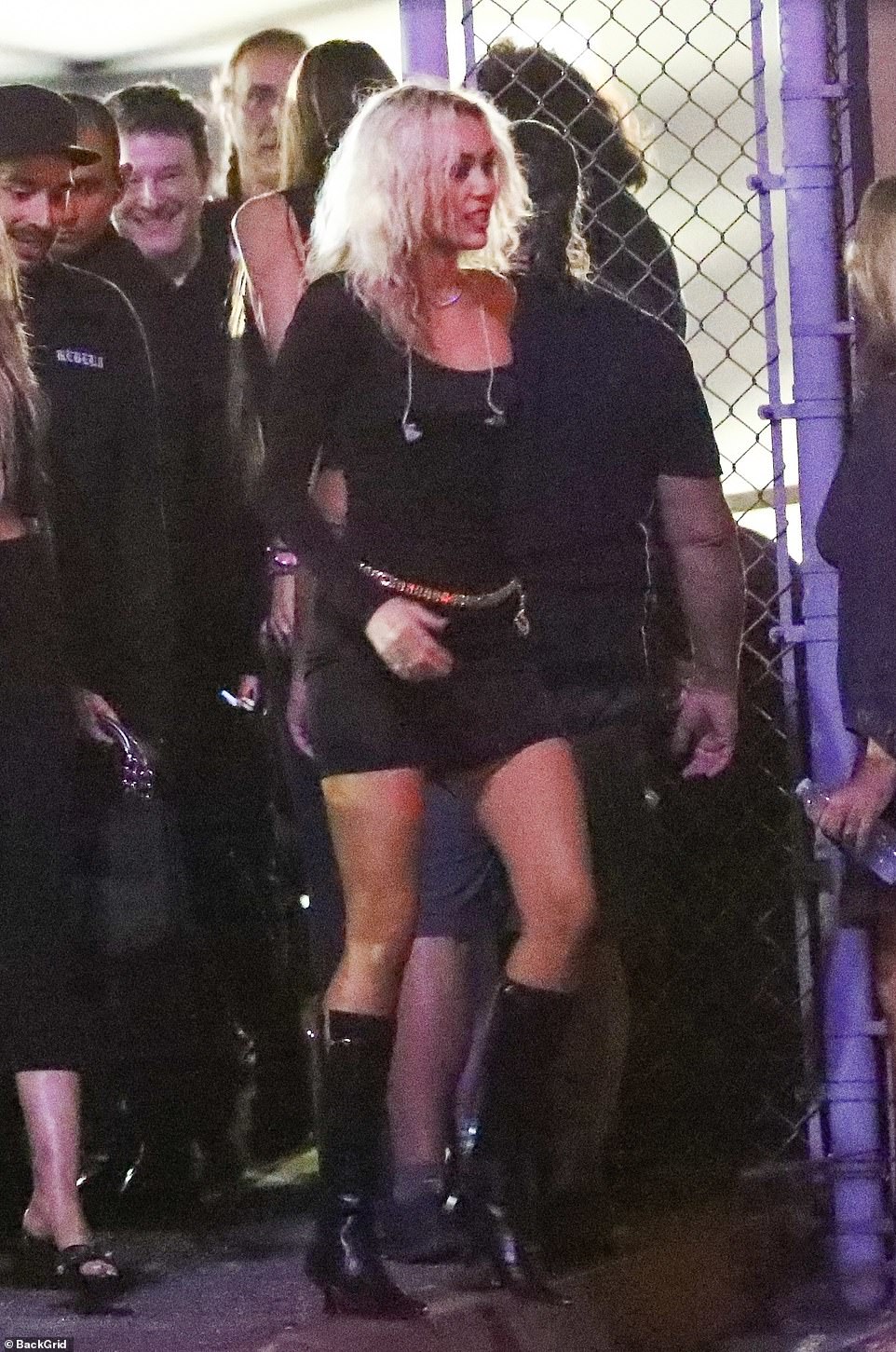 Looking great: Miley Cyrus looked better than ever while appearing as a guest at the Inglewood, California reunion

Kourtney kept close to her husband Travis at the event as the 43-year-old reality TV star and the 46-year-old drummer held hands backstage.

They were joined by Barker’s stepdaughter, Atiana De La Hoya, at the function, which was held at the Kia Forum.

Kourtney looked typically dapper for the live show, which honored the life of the Foo Fighters drummer.

The Lemme founder wore a long, form-fitting dark dress that had a faux-denim print throughout.

She had cut-outs on her shoulders that exposed her skin and wore trendy thick black leather boots with a chunky platform.

The fashionista clutched a metallic silver bag as she allowed her new husband, whom she married in May, to guide her. 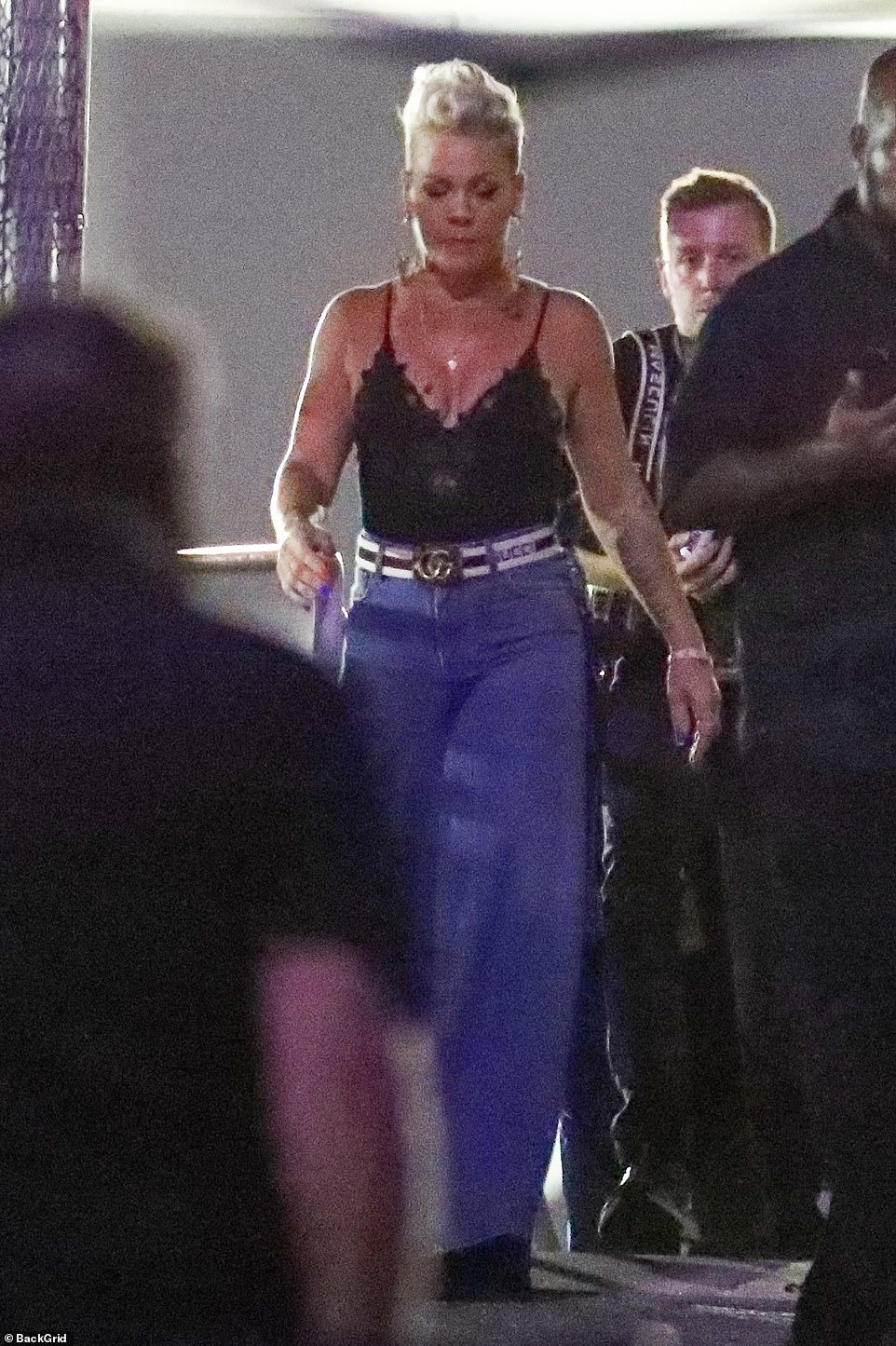 She stood out: Pink wore a black camisole with jeans and her white blonde hair slicked back. 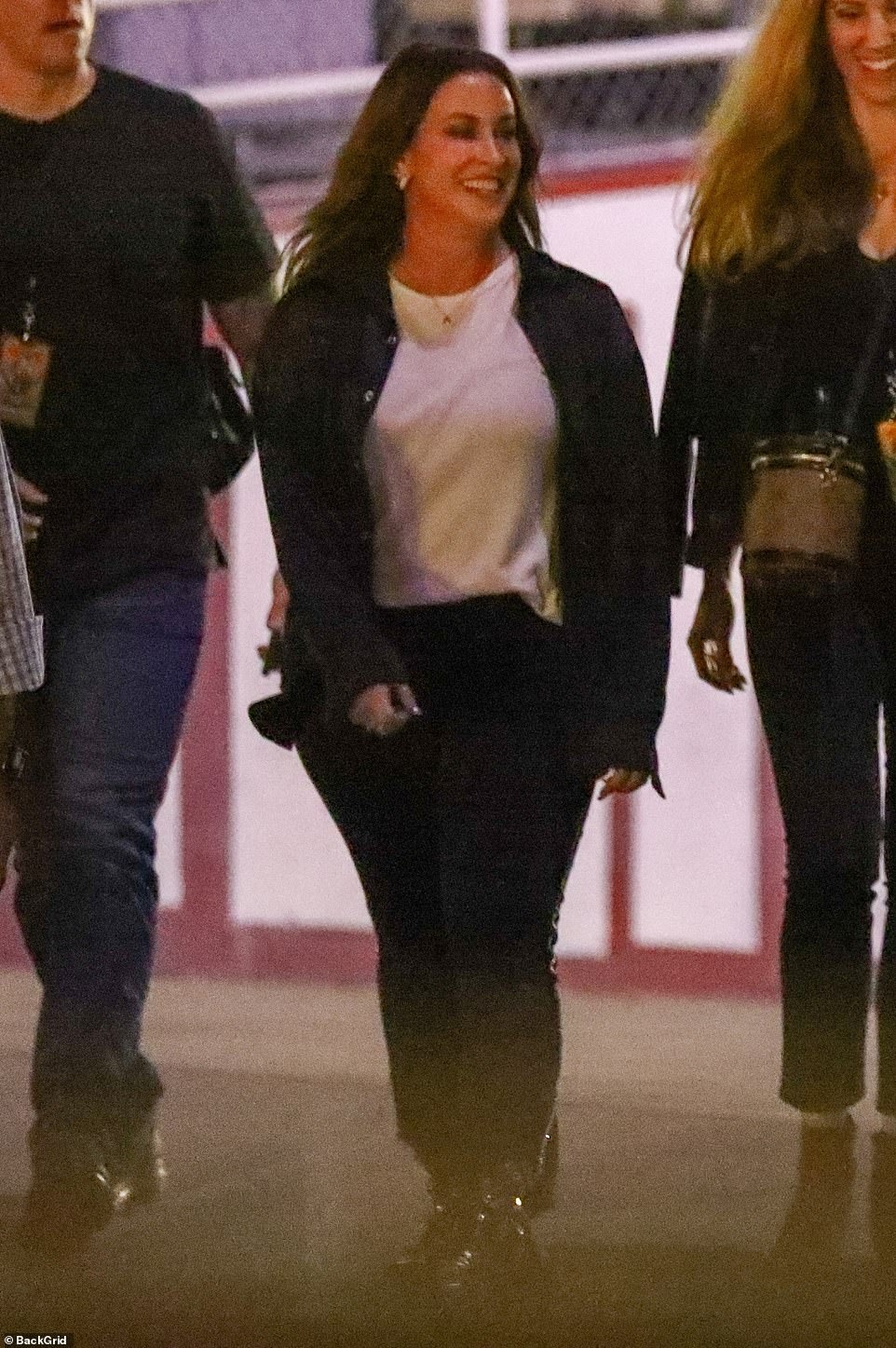 Understated: Alanis kept her look simple as she wore cutoff black pants and a white T-shirt under an unbuttoned black blouse 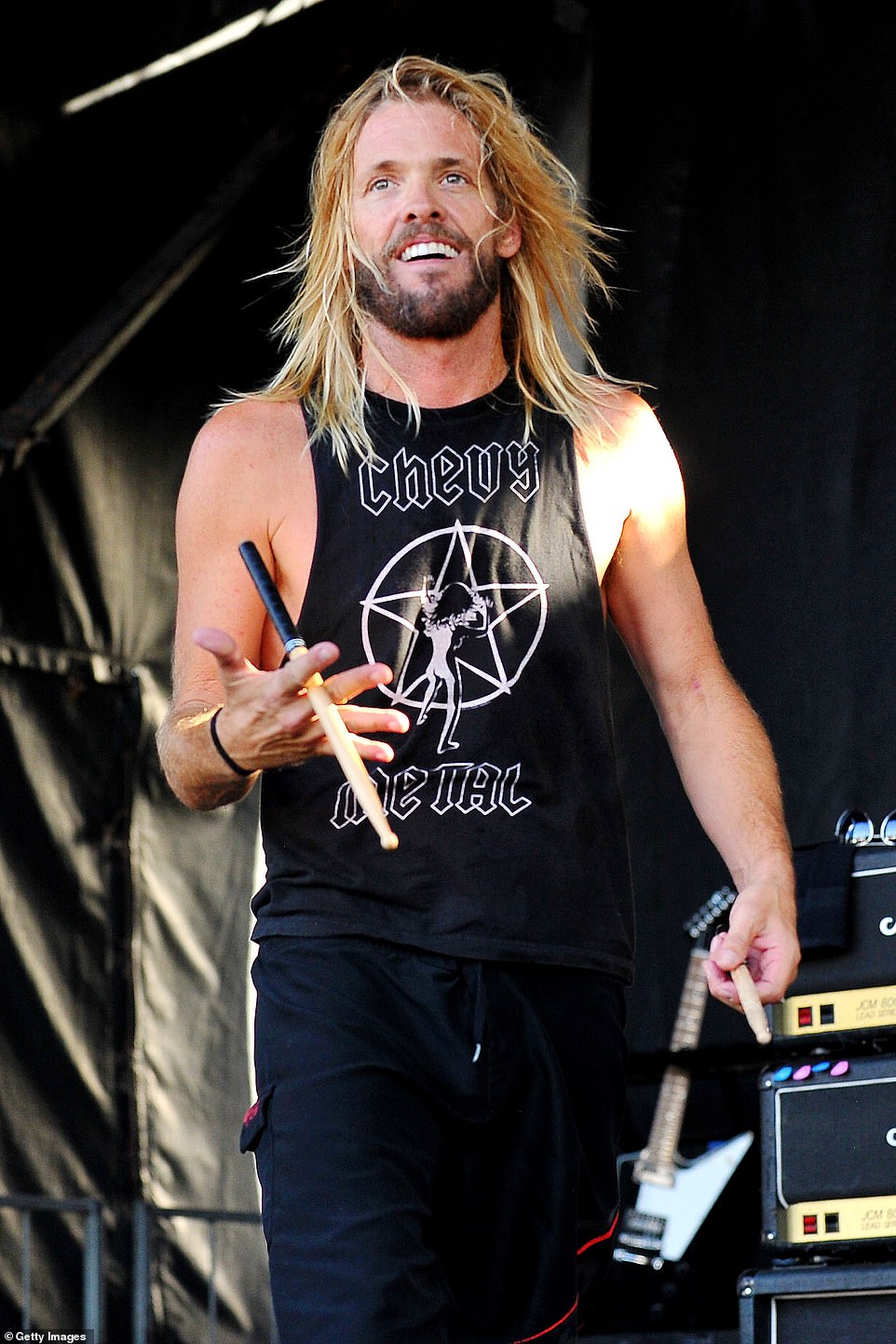 Kourtney’s shiny jet-black bob was freshly cut and pressed to the bone with a center parting.

She wore a sparkly stone encrusted choker around her neck as she supported her boyfriend at the event.

Atiana walked in front of them with her long light brown hair falling over her shoulders and down her back.

She paired it with a black crop top that exposed a bit of her midriff, dark green pants, and black boots.

For his part, Travis wore a black t-shirt with explicit writing printed in white font.

He covered his bald, tattooed head with a black beanie and wore silver chokers around his neck.

The rocker, who rose to fame with his band Blink-182, wore gray and black checkered pants with black leather boots.

He later went on stage to play drums while performing with the Foo Fighters. 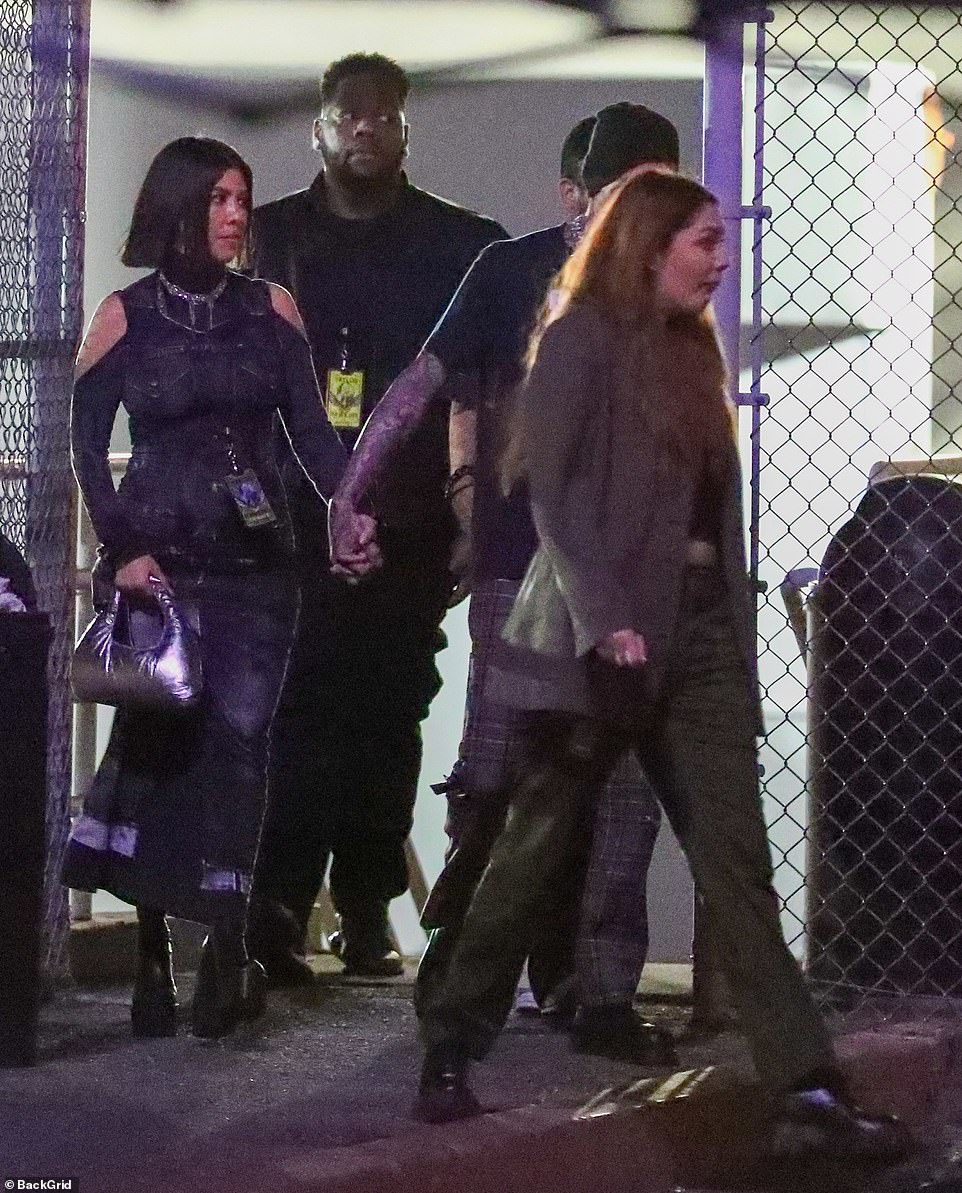 Family affair: Kourtney and Travis were joined by Barker’s stepdaughter, Atiana De La Hoya, at the function, which took place at the Kia Forum 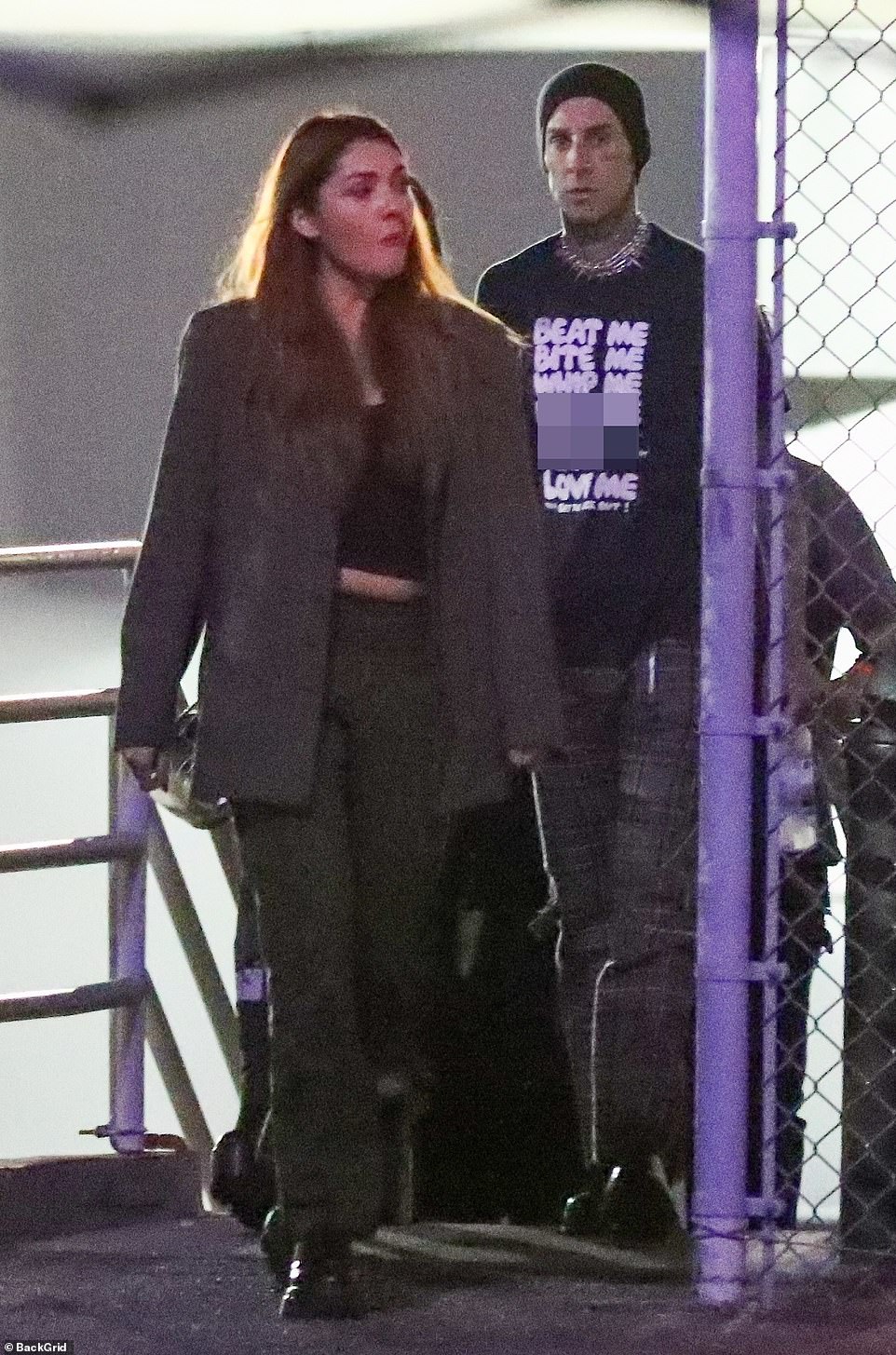 Miley Cyrus, 29, looked better than ever when she appeared as a guest at the Inglewood, California reunion.

The Tennessee-born blonde artist dressed in all black and showed off her slim figure in a long-sleeved mini dress.

She coordinated it with a pair of black knee-high boots with a pointed toe design and a kitten heel.

A couple of Miley’s family members, mother Tish Cyrus, 55, and sister Brandi Cyrus, 35, were also by her side. 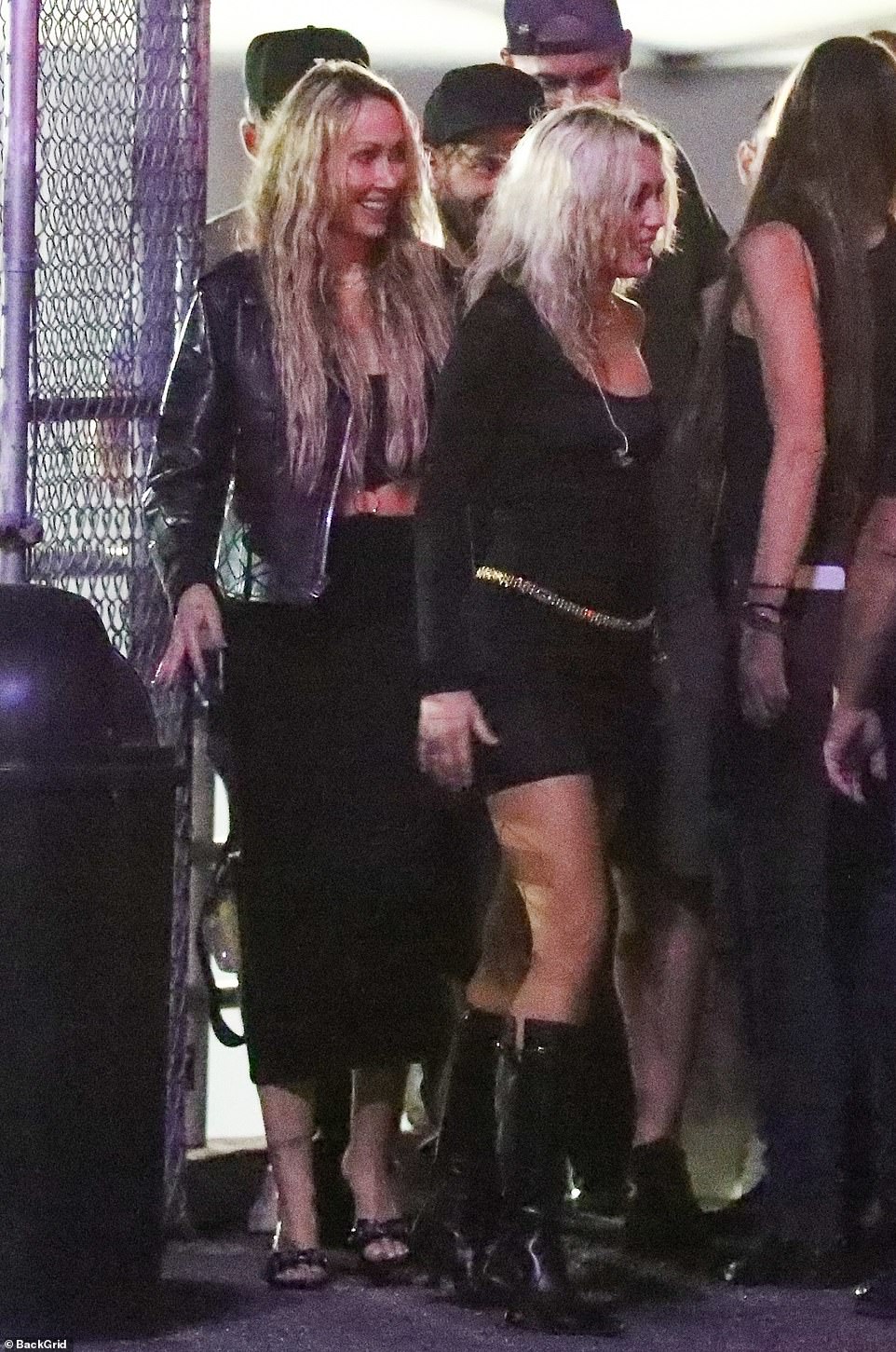 Hot: Tennessee-born blonde cheerleader Miley dressed in all black and showed off her slim figure in a long-sleeved minidress and boots

She looked younger than her age in a long dress with side slits and a keyhole center.

The mother-of-five wore her long blonde hair in a wet, wavy look that flowed down to her slim waist.

She finished off the look with a classic black leather jacket and smiled as she enjoyed the evening with her daughters. 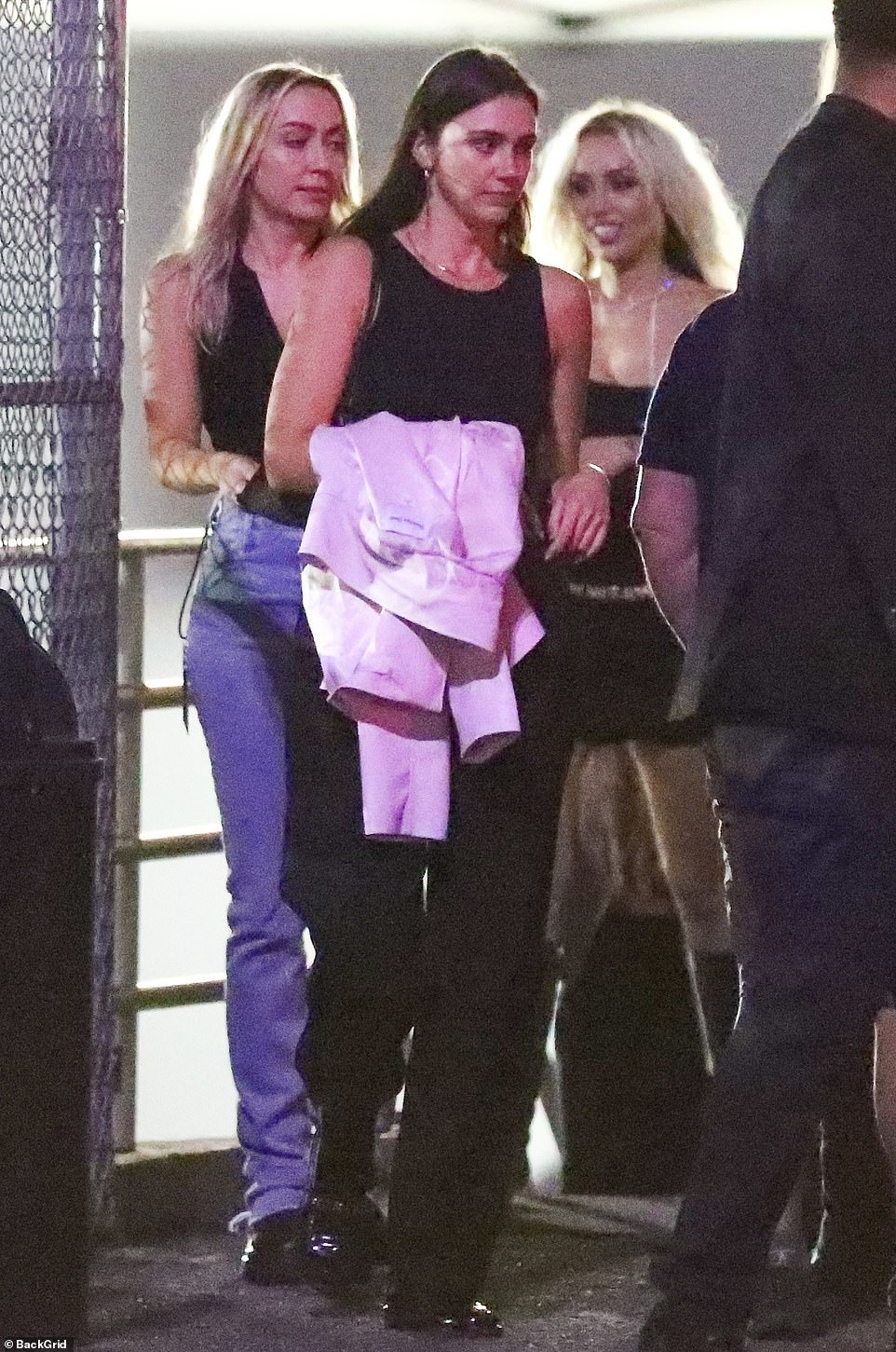 Behind the scenes: Miley was seen with her older sister Brandi Cyrus backstage at the tribute show

Supportive: Miley’s sister, Brandi, and her boyfriend, Maxx Morando, were at the show to cheer her on.

They showed up for the emotional evening, where Taylor’s memory was honored.

The Philly-raised songwriter looked great in a low-cut lace black tank top that showed off her perky cleavage.

She added a pair of wide-legged denim pants, which she accented with a black and white striped Gucci belt.

Alanis kept her look simple as she dressed in black cropped pants and a white T-shirt under an unbuttoned black blouse. 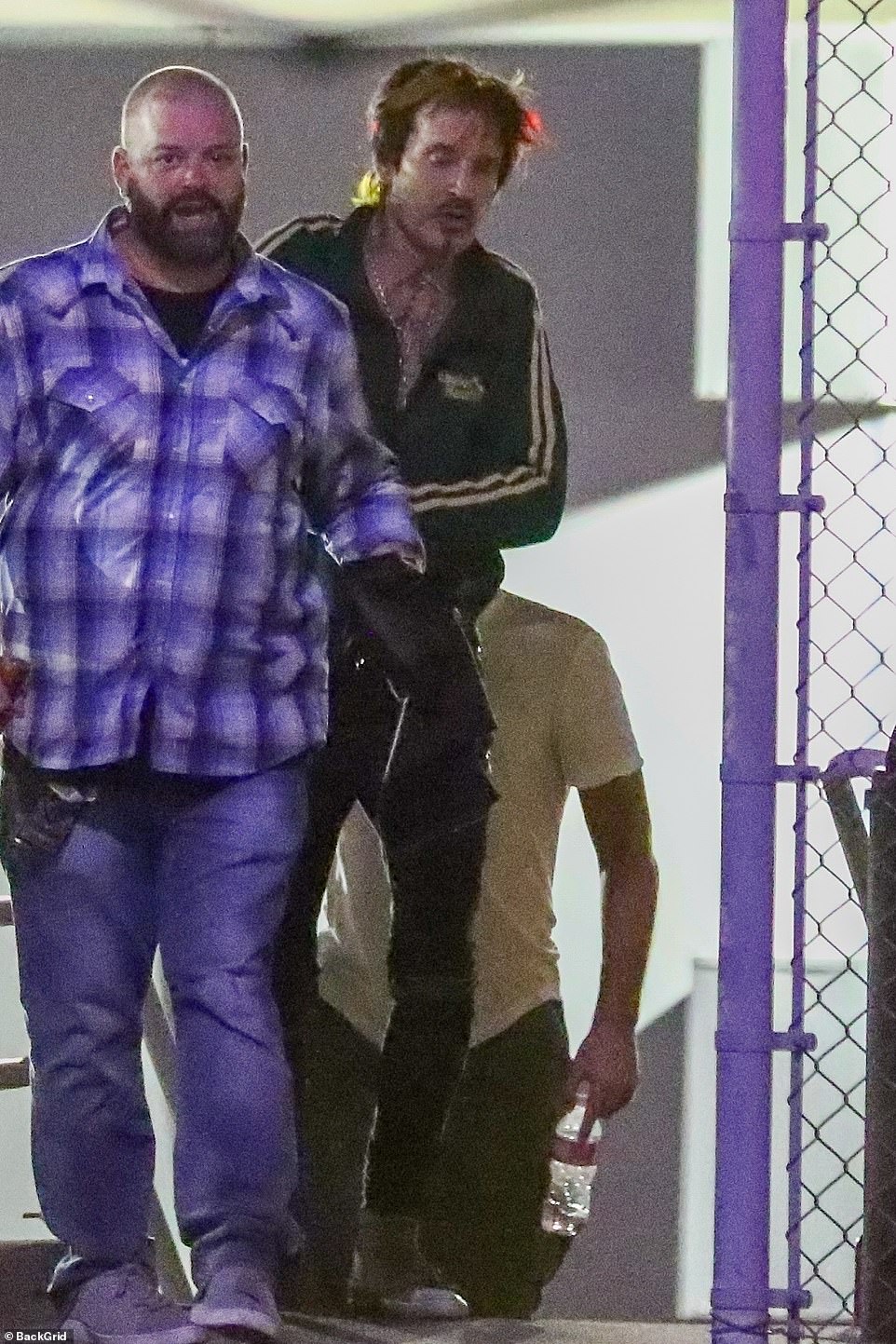 Rock on: Tommy Lee, a drummer for the rock band Motley Crue was also there. He has made headlines again for being portrayed on the series Pam & Tommy about his marriage to Pamela Anderson.