The fuel giant has been accused of ‘blatant light pollution’ after it built a filling station in the quiet village of Thropton, Northumberland.

The station, which includes a Spar and a butcher shop, opened in November in the village – which has barely 458 inhabitants.

Thropton is on the edge of the Northumberland National Park, which has been voted one of the world’s best places for stargazing. 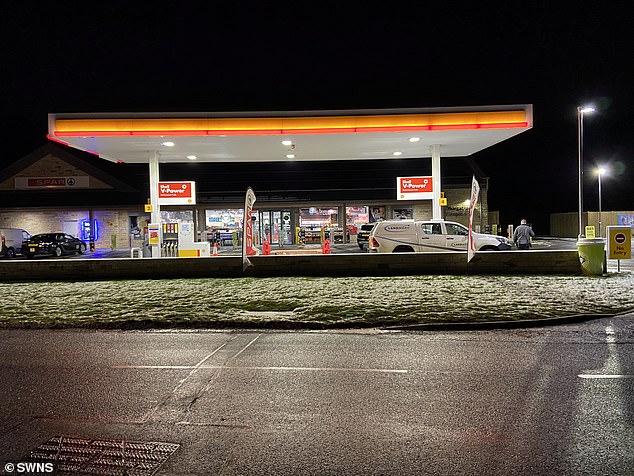 The station, which includes a Spar and a butcher shop, opened in November in the village – which has barely 458 inhabitants –

Several residents are calling for the gas station to be closed or closed completely at night for fear that the light could scare away tourists.

One of them said, “There’s blatant light pollution seeping into the night sky.”

A Shell spokesperson said: ‘We are exploring suitable solutions to dim the lighting to address this issue.’

The county’s 572 square miles was awarded Gold Tier status for their pristine dark skies, rating it next to Death Valley in America.

Between November and February, thousands of dark sky fans flock to the area to enjoy the Northern Lights, also known as aurora borealis, visible over the county.

The “row of lights” has erupted on social media to such an extent that a local Facebook group has even conducted a poll of residents to shed light on the issue.

According to the Facebook group ‘Rothbury & Coquetdale’, 98 percent of people said lighting was not a problem.

Meanwhile, two percent of people agreed that the lighting was “awful” and “an degradation of our landscape.”

Councilor Steven Bridgett, representing Thropton, said: ‘A complaint has been made to Northumberland County Council by a parish council that sits next to Thropton about the lighting.

“What I will say is that the current lighting plan is very different from what was originally proposed and much more conservative (than previously proposed).”

The row comes after scientists say light pollution has led to reduced visibility of stars around the world over the past decade.

Dr. Christopher Kyba, from Germany’s Research Center for Geosciences, said: “To put this into perspective, a child born in an area where 250 stars are visible is likely to see less than 100 in the same location 18 years later.”