Is Dwayne ‘The Rock’ Johnson fat? You’ll be forgiven if you think not, but according to official weight calculators, the Hollywood hunk is technically obese.

But the wrestler-turned-actor famous for his chiseled physique isn’t the only superstar mislabeled by the body mass index (BMI) formula.

Fellow Fast and Furious actor Vin Diesel is also considered too flabby, with a BMI of 30, one less than Dwayne.

Meanwhile, the Terminator himself, the legendary Arnold Schwarzenegger, sat perilously close to the threshold of morbid obesity at the peak of his fitness in the 1980s, with a BMI of 33.

Experts say the celebrity examples are proof that it’s time to finally ditch the hated benchmark measurement, which is calculated crudely by dividing your weight by height.

The calls came to a head yesterday, as researchers said BMI should be replaced with the lesser-known waist-to-hip ratio because it better predicts whether someone will die young.

Devised by a Belgian mathematician in the 1830s, doctors have relied on BMI for nearly two centuries.

But it has a major flaw, critics insist.

The BMI is unable to differentiate between fat distribution and muscle mass.

Realistically, it means that a rugby player and a potato of exactly the same height and weight would share scores, even if the former has a ripped physique and the other carries a spare tire. 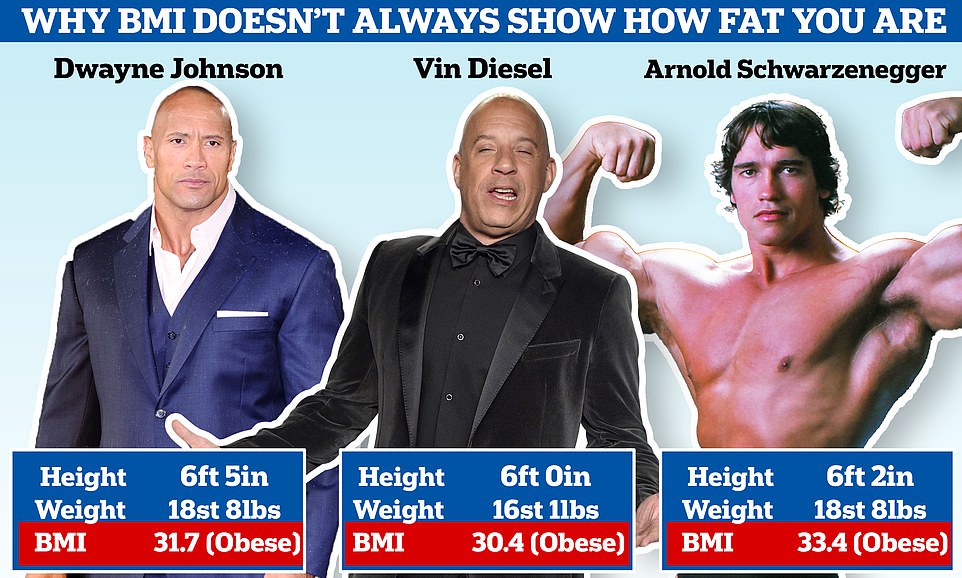 Hollywood Hunk or Hulk? Muscular celebrities like Dwayne ‘The Rock’ Johnson, Vin Diesel and Arnold Schwarzenegger are considered obese according to the body mass index formula, which is widely used by health authorities around the world. Some scientists now argue that it should be replaced. Schwarzenegger’s figures are from the ‘peak’ of him as a bodybuilder 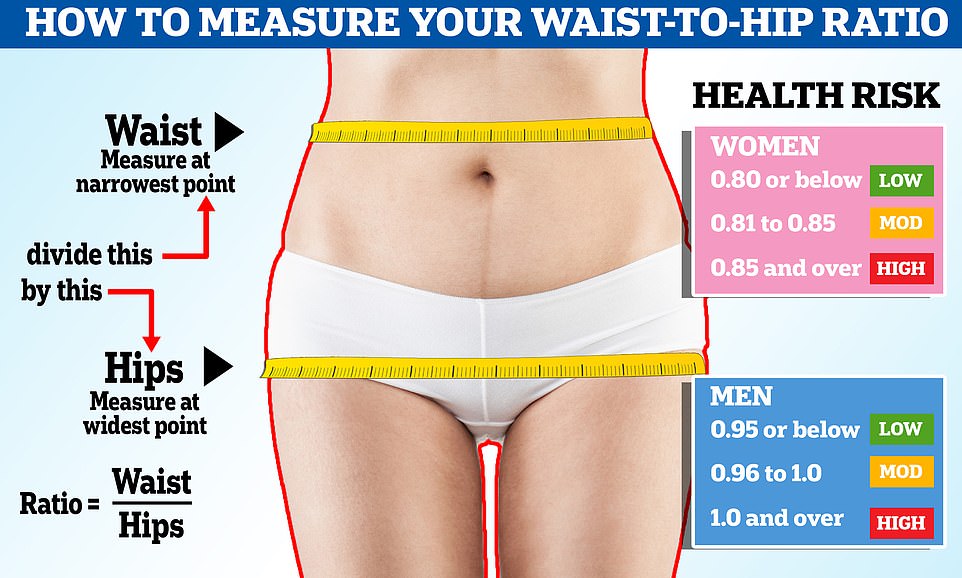 Waist-hip ratio is one of the touted contenders to replace BMI. It is calculated by dividing the circumference of your waist by that of your hips. Women with a ratio of 0.85 or more and men with a score of 0.9 or more are considered to have high-risk visceral fat levels.

Dr. Arya Sharma, an obesity expert at the University of Alberta in Canada, told MailOnline that the examples show how BMI measures a person’s size, not obesity.

“BMI is a measure of size, not health,” he said.

“Obesity is a medical diagnosis that should be based on the presence of health problems resulting from excess body fat; it is not diagnosed simply by stepping on a scale.”

Ifran Khan, a medical student at University College Cork who wrote the latest paper calling for BMI to be abandoned, said: “It does not reliably predict disease risk or mortality.”

Judging WHR can help people determine if they have excess weight around their waist, Khan and other experts said.

Studies have repeatedly shown that this spare tire, as it’s colloquially known, can increase the risk of type 2 diabetes and heart disease.

How to calculate your waist-hip ratio

The waist-hip ratio is a measure that indicates healthy levels of body fat.

Use a tape measure to determine your waist circumference: the smallest width of your natural waist, usually just above your belly button.

Then do the same with your hips, the widest part of your buttocks.

Divide the waist measurement by the hips figure to determine the ratio.

The value of the score differs for men and women.

The ratio is the circumference of the waist, usually just above the navel, divided by that of the hips or the fullest part of the buttocks.

Khan said the celebrity examples demonstrated the flaws behind BMI.

“It exactly captures the main point of the study: Regardless of your BMI, WHR remains consistent in its strength to predict death,” he said.

“As seen in the photographs, even if they have an ‘obese’ BMI, that doesn’t necessarily mean they are at increased risk of disease or mortality.”

Mr. Khan and his colleagues presented a study arguing why we should stop using the BMI scale at the annual meeting of the European Association for the Study of Diabetes in Stockholm.

your study tracked the health records of more than 50,000 adults who had died.

The experts measured the probability that a person would die prematurely based on their BMI, WHR, or fat mass index, which, similar to BMI, represents the amount of fat a person has compared to their height.

The results showed that having a higher WHR increased the risk of death linearly.

This meant that the risk of an early death was lowest for those with the smallest waist-to-hip ratio, before rising steadily as the number went up.

For comparison, those with an extremely high or low BMI or FMI had a higher risk of death, compared to those in the middle.

HOW TO CALCULATE YOUR BODY MASS INDEX – AND WHAT IT MEANS

B.Body mass index (BMI) is a measure of body fat based on your weight relative to your height.

This, the authors stated, means that WHR was a better predictor of premature death of any type than the other types of obesity measurement.

Khan said: “The main limitation of BMI is that it does not take into account differences in fat distribution.

“This could mean that someone who has stored fat around the waist will have the same BMI as someone of the same age and height who stores fat around the hips, despite the health risks of belly fat.

‘WHR, however, better reflects levels of abdominal fat, including visceral fat, which surrounds organs inside the body.

‘With WHR the message is simply [that] the lower the WHR, the lower your mortality risk.’

“A more accurate measure of healthy body shape can make a significant difference in ill health and deaths from type 2 diabetes, heart disease, some cancers and many other conditions.”

However, criticism of the inaccuracy of the BMI is not new.

Even the NHS itself warns of its failings, including the muscle versus fat issue.

It also says that it should not be used for pregnant women due to the inevitable weight gain as the baby develops in the womb.

The BMI also does not detect some obesity risks of different ethnic origins.

For example, studies have shown that people of South Asian descent have a higher genetic risk of type 2 diabetes if they have a BMI greater than 23, which is considered a healthy score for other groups.

However, some argue that BMI is the most useful indicator we have for weight and health in the general population.

And others have argued that using WHR has its own problems.

In response to the latest study, Professor Nick Finer, a consultant at University College London, said: “It is well established that BMI is an imperfect measure.”

He added, however, that “there is a problem with relying on waist-to-hip ratio as a measure of obesity severity.”

This is because it “changes little with modest weight loss and therefore does not necessarily reflect improvements in health.” 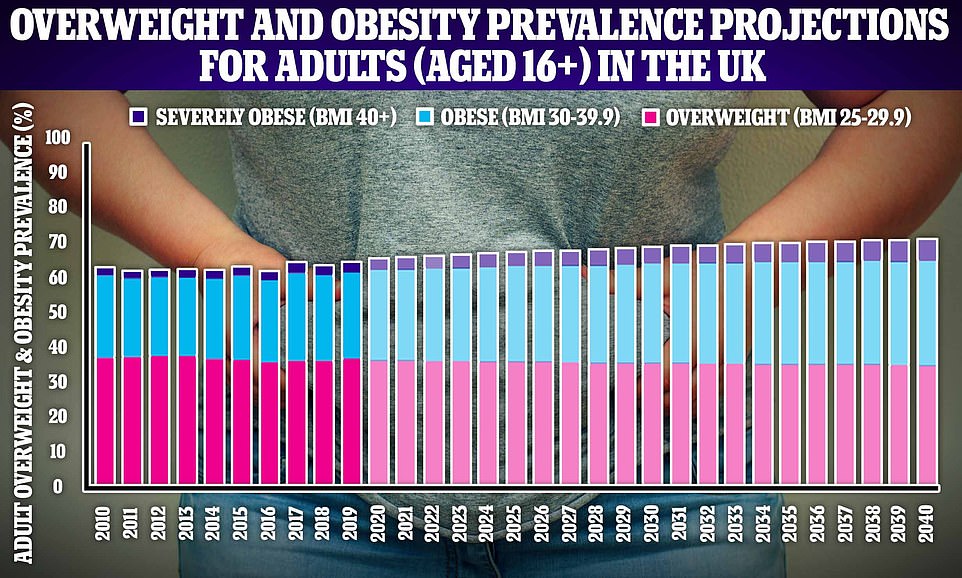 More than 42 million adults in the UK will be overweight or obese by 2040, according to projections from Cancer Research UK

It comes after the National Institute for Health and Care Excellence said in April that people should make sure their waist measurement is less than half their height to keep health problems at bay.

Adults with a body mass index (BMI) below 35 should measure their own waist-to-height ratio as part of broader plans to tackle obesity, he said.

Excess body weight is seen as one of Britain’s biggest and ever-expanding health problems, with the latest data showing that 64 per cent of adults are overweight, and more of us are projected to gain weight in the future. future.

Obesity is not only increasing British waistlines but also health care costs, with the NHS spending an estimated £6.1bn on treating weight-related illnesses such as diabetes, heart disease and some cancers between 2014 and 2015.

In the US, an estimated 73.6% of adults are overweight or obese.

What should be done to tackle Britain’s ever-booming waistlines is up for debate.

The new prime minister, Liz Truss, is said to be considering scrapping a series of “nanny state” measures against obesity with the purported aim of helping the cost-of-living crisis.

The move prompted a coalition of 70 health organizations to write to Ms Truss today, expressing “deep concern” at rumors of reversals.

Masked man in black ‘grabbed girl, 10, around waist as she was on her way to school’