As the sun rose on Florida’s Gulf Coast on Thursday, it revealed the devastating trail of destruction left in Hurricane Ian’s wake.

The area surrounding Fort Myers, known as the Lee Island Coast, saw the most catastrophic destruction, with storm surges reaching an estimated 12 feet in some areas, sweeping cars away and reaching the rooflines of homes.

The causeway connecting Sanibel Island with the mainland was destroyed in the raging Category 4 hurricane, and more than two million people were left without power after the monster storm barreled through.

A handful of deaths have already been confirmed, and the sheriff of Lee Country, which surrounds Fort Myers, speculated that fatalities will number in the ‘hundreds’.

An unspecified number of people were stranded after choosing to ride it out at home rather than heed evacuation orders, Florida Governor Ron DeSantis said. 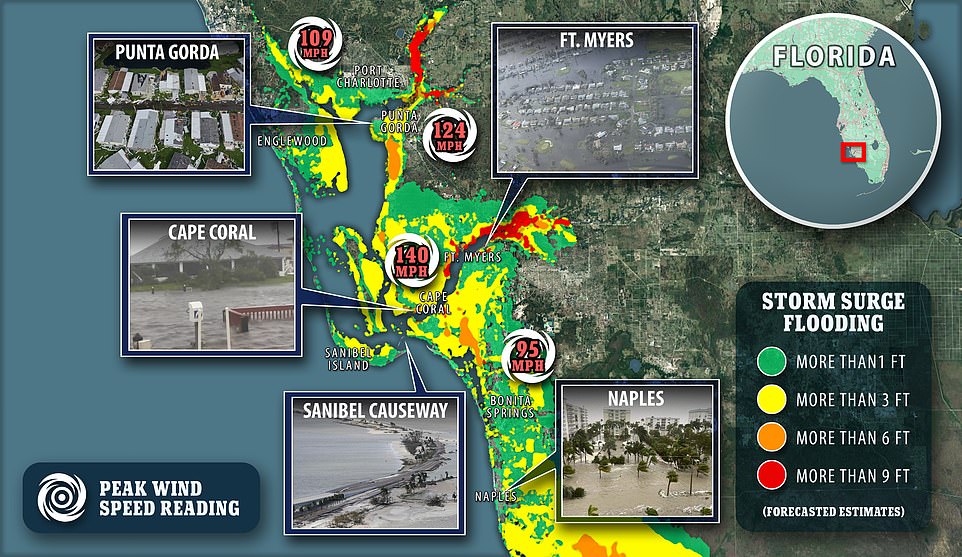 The area around Fort Myers, known as the Lee Island Coast, witnessed the worst devastation as Hurricane Ian made landfall there on Wednesday. Storm surges were widespread and devastating, reaching 12 feet in some areas

Here is how the storm unfolded for those unwilling, or simply unable, to evacuate:

With Ian about 65 miles offshore from Punta Gorda, the outer bands were already lashing coastal communities and dropping several inches of rain.

The storm’s peak wind speeds of 155 mph put it just shy of a Category 5 designation on the Saffir-Simpson scale, the maximum classification.

Hurricane, tropical storm, and storm surge warnings were in effect for much of Florida’s Gulf Coast.

‘This is a life-threatening situation,’ the National Weather Service said in a flash bulletin. ‘Persons located within these areas should take all necessary actions to protect life and property from rising water and the potential for other dangerous conditions.’ 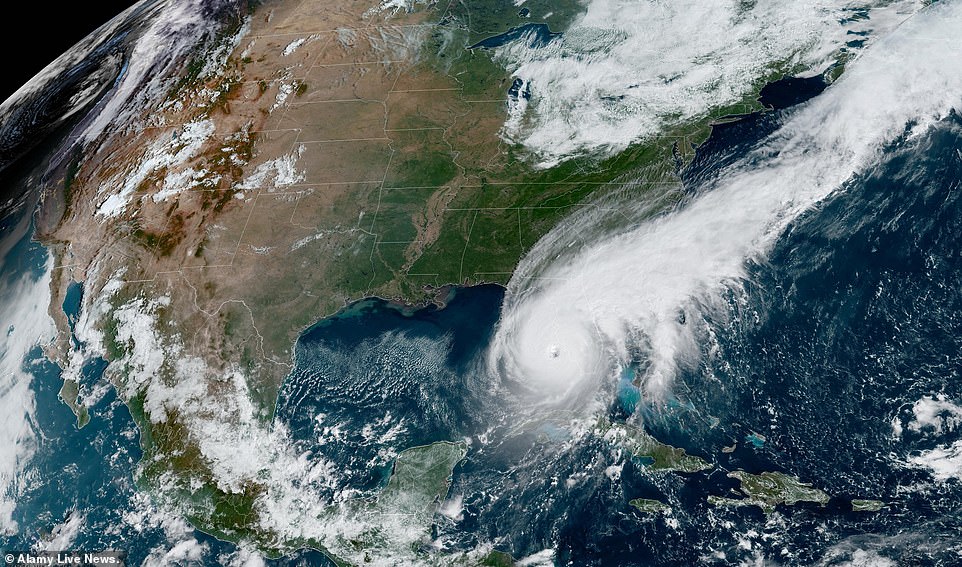 Hurricane Ian is seen on Wednesday morning as it moved closer to Florida’s Gulf Coast. The storm’s peak wind speeds of 155 mph put it just shy of a Category 5 designation on the Saffir-Simpson scale, the maximum classification 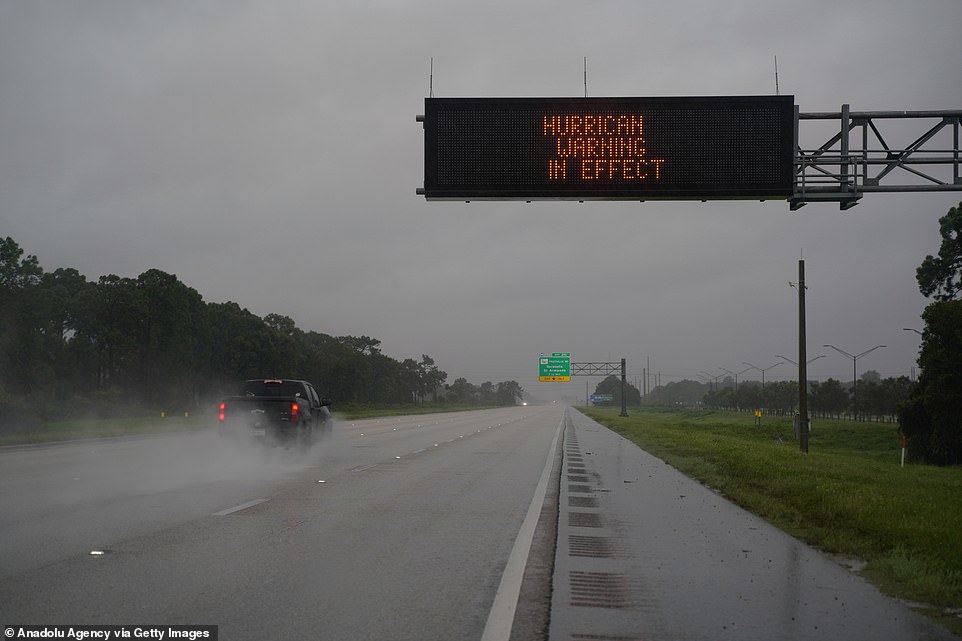 An evacuation route from Fort Myers is seen early on Wednesday, as residents had the last chance to escape the storm 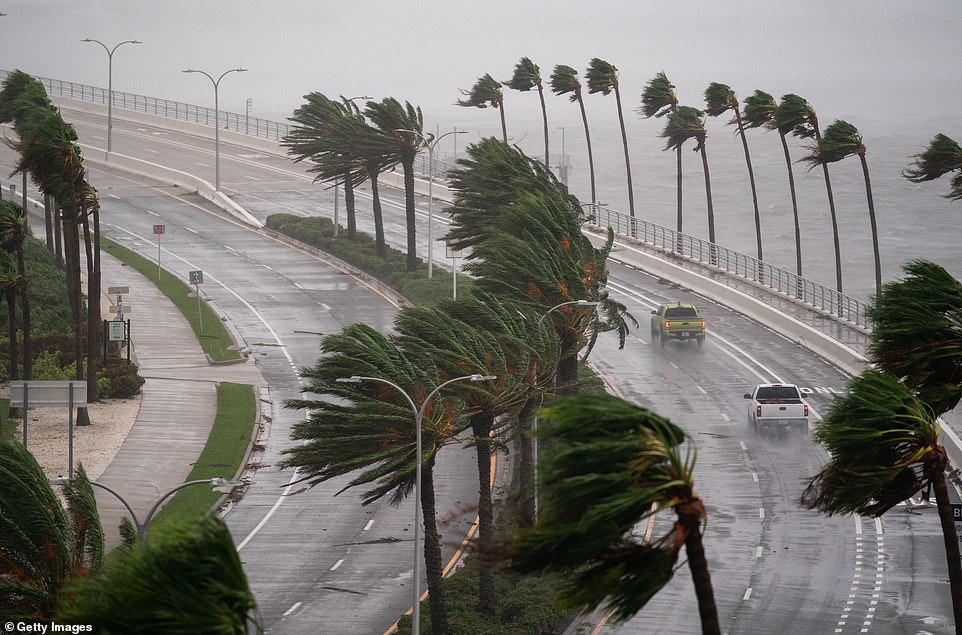 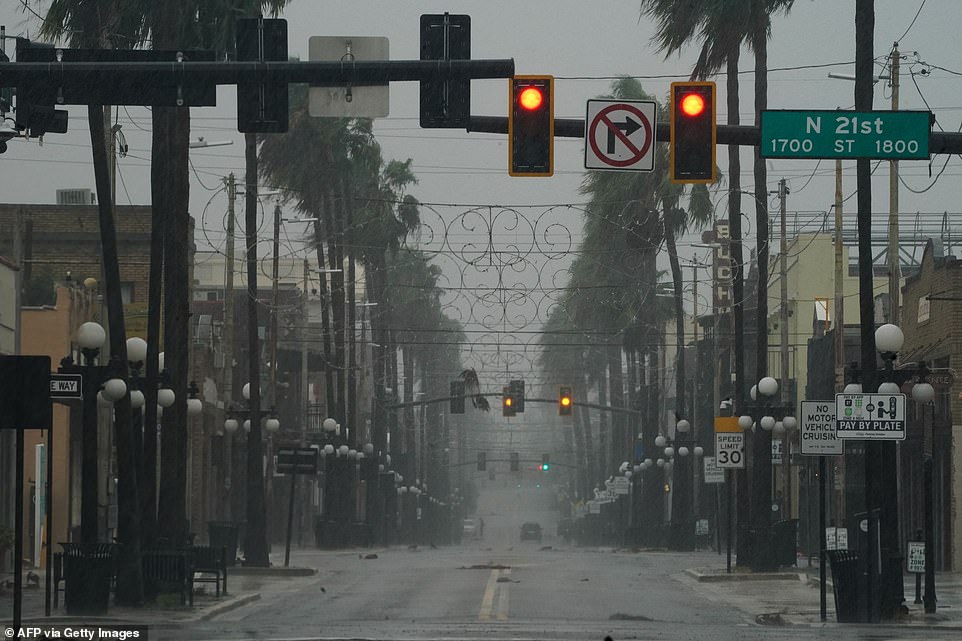 Some 2.5 million coastal residents and others in danger zones around Tampa, Ft. Myers and nearby communities were ordered or encouraged to evacuate ahead of the massive storm.

But many did not, with some simply vowing to ride it out and others unable to leave for financial or other reasons.

In Sarasota County, officials warned that emergency vehicles would not respond to calls for help until it was safe to be on the road. Those who failed to get out by Wednesday afternoon, officials said, needed to shelter in place.

‘Most people heeded the warnings of doing the evacuations in those very sensitive locations, but not everyone may have done that,’ DeSantis said.

As the storm approached land, its powerful counterclockwise winds sucked the water out of Tampa Bay, which sat in the northern edge of the system.

The National Weather Service warned in an alert: ‘The water WILL come back. Please do not attempt to walk there or any other location with receding water.’

Still, some foolhardy thrill seekers did venture out onto the otherworldly mud flats, posting photos of the scenes on social media. 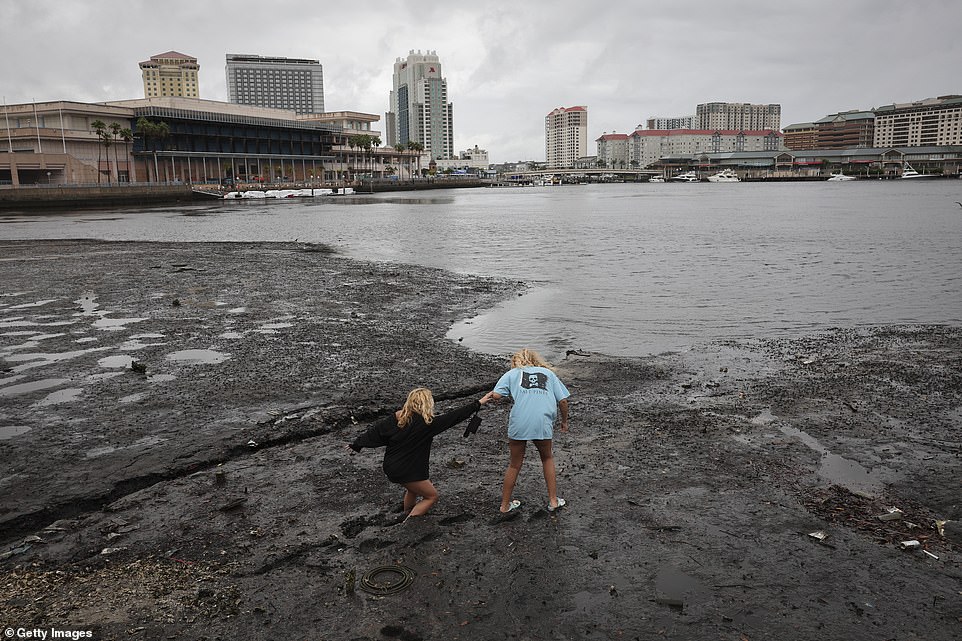 Two young sisters walk along the shore of a receded Tampa Bay as water was pulled out from the bay in advance of the arrival of Hurricane Ian on Wednesday morning in Tampa, Florida 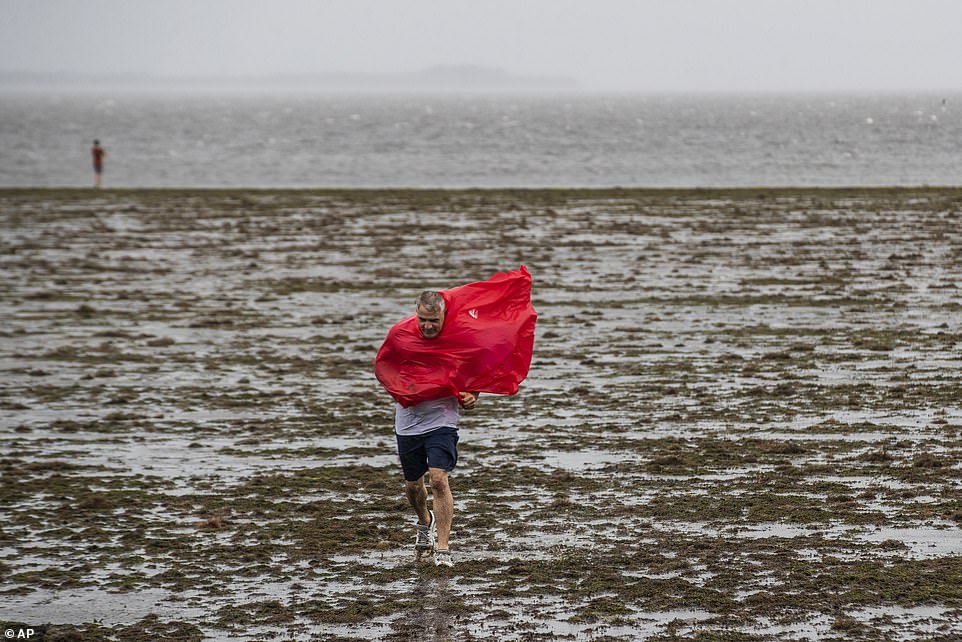 Tampa Bay is about 100 miles north of Fort Myers, where the hurricane eye eventually made landfall.

The phenomenon of the bay emptying out also occurred in 2017 when Hurricane Irma caused another so-called negative surge, according to experts.

Because hurricane winds blow counterclockwise, the winds at the northern edge of Ian’s circular system were blowing from east to west with such force that they pushed bay water into the Gulf of Mexico.

In a noon update, the National Hurricane Center said that Ian’s eyewall, the most powerful part of the storm, was moving onshore at Sanibel and Captiva islands, popular family vacation destinations known for their quiet beaches.

A weather station near Sanibel Island reported sustained winds of 71 mph, just shy of hurricane strength, with gusts up to 98 mph.

The noon update said the Ian remained a powerful Category 4 hurricane, with winds of 155 mph, and was moving inland at nine miles per hour. 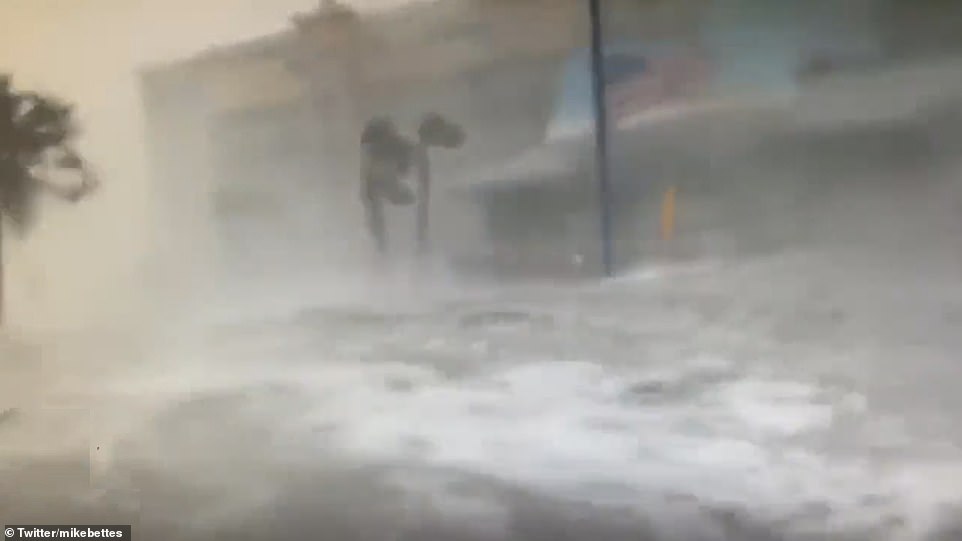 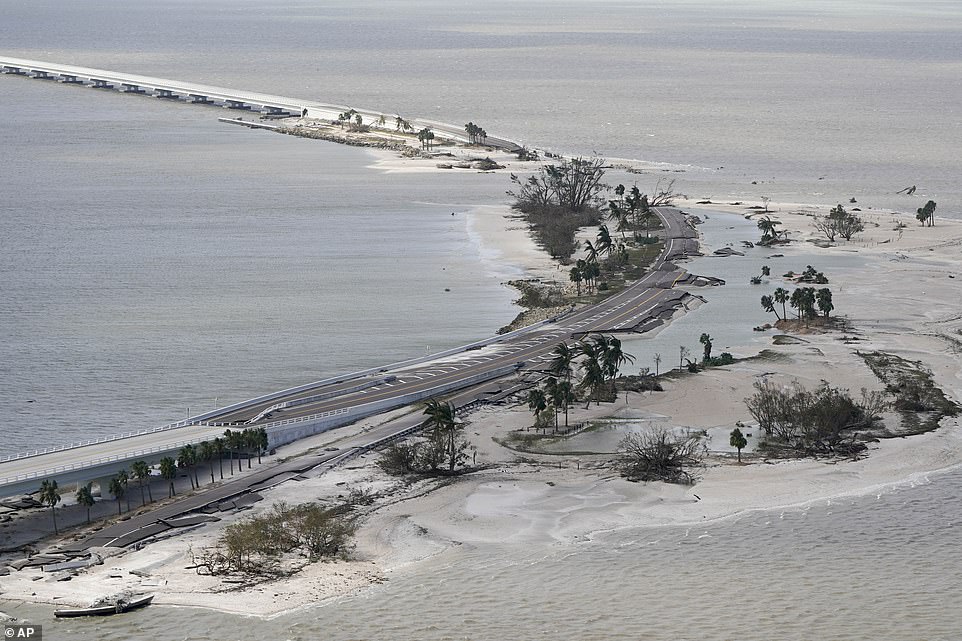 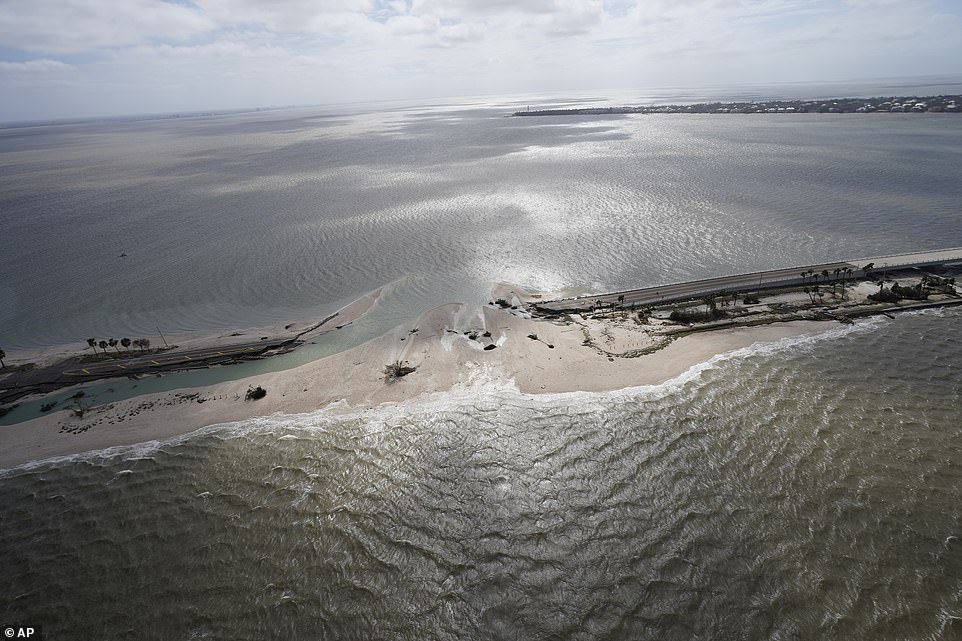 Huge sections of the three-mile-long Sanibel Island causeway were knocked out in the storm, as seen on Thursday 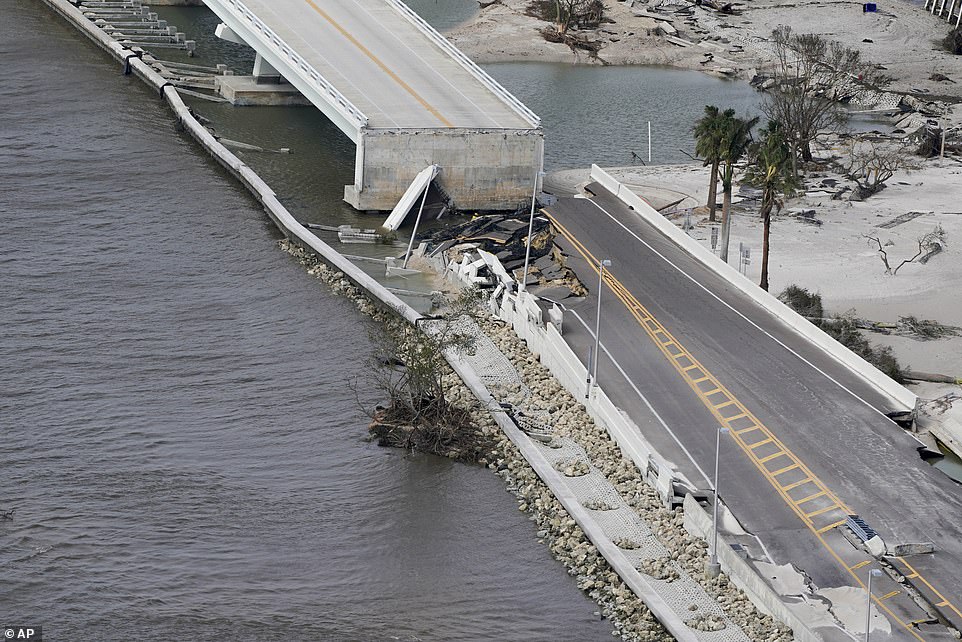 A damaged causeway to Sanibel Island is seen in the aftermath of Hurricane Ian is seen Thursday. Sanibel and Captiva islands are now totally cut off from the mainland

By this point, anyone remaining on Sanibel or Captiva was almost certainly trapped for the duration.

At some point in the storm, though it’s unclear exactly when, the causeway connecting the islands to the mainland was decimated. Photos show multiple sections of the causeway wiped out entirely.

On other sections of the three-mile-long bridge, which spans several man-made causeway islands, the asphalt is folded like an accordion and completely impassable.

Ian made landfall at 3.05pm as a powerful Category 4 storm, with sustained winds of 150 mph.

The center of the hurricane’s eye first hit land near Cayo Costa, an island off the coast of Fort Myers, according to the National Hurricane Center. The hurricane was moving north-northeast at nine miles per hour.

As Ian made landfall from the Gulf of Mexico, roiling seawaters swept into waterfront homes in Naples, Fort Myers and other towns and cities.

Florida’s southwestern shoreline, dotted with sandy beaches, coastal towns and mobile home parks, was rapidly transformed into a disaster zone as the storm hit. Small residential areas off of Highway 41 were left in a shambles. 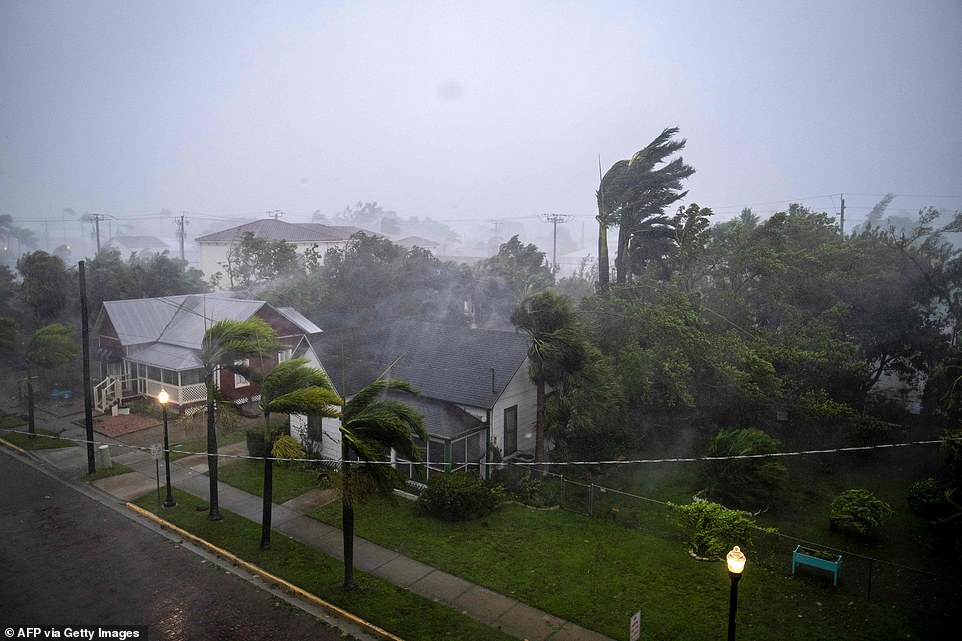 Gusts from Hurricane Ian hit in Punta Gorda, Florida on Wednesday as the storm made landfall 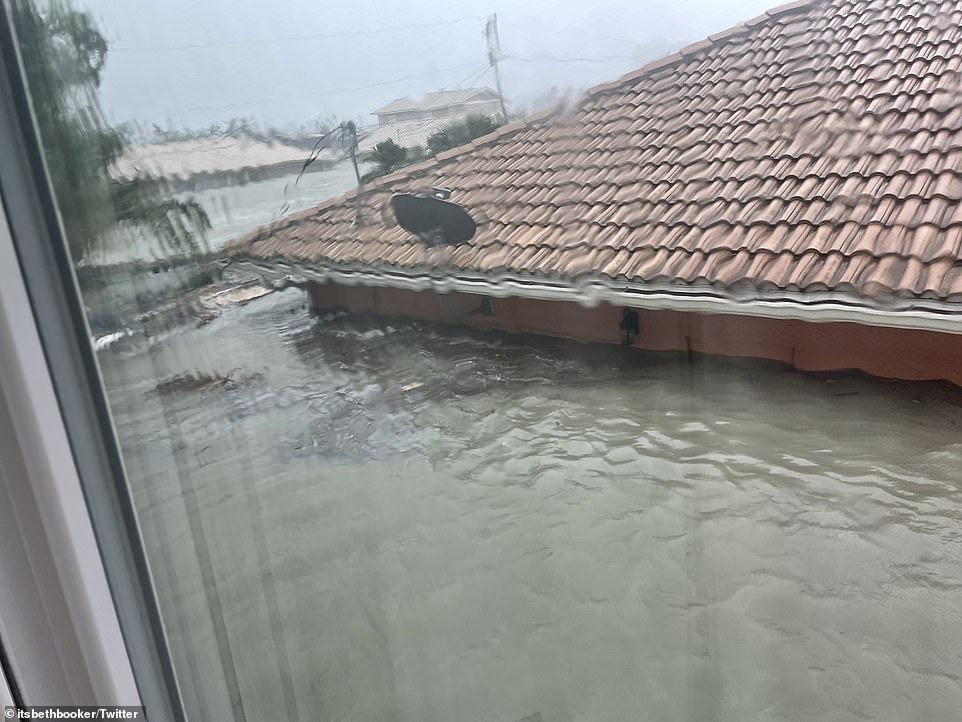 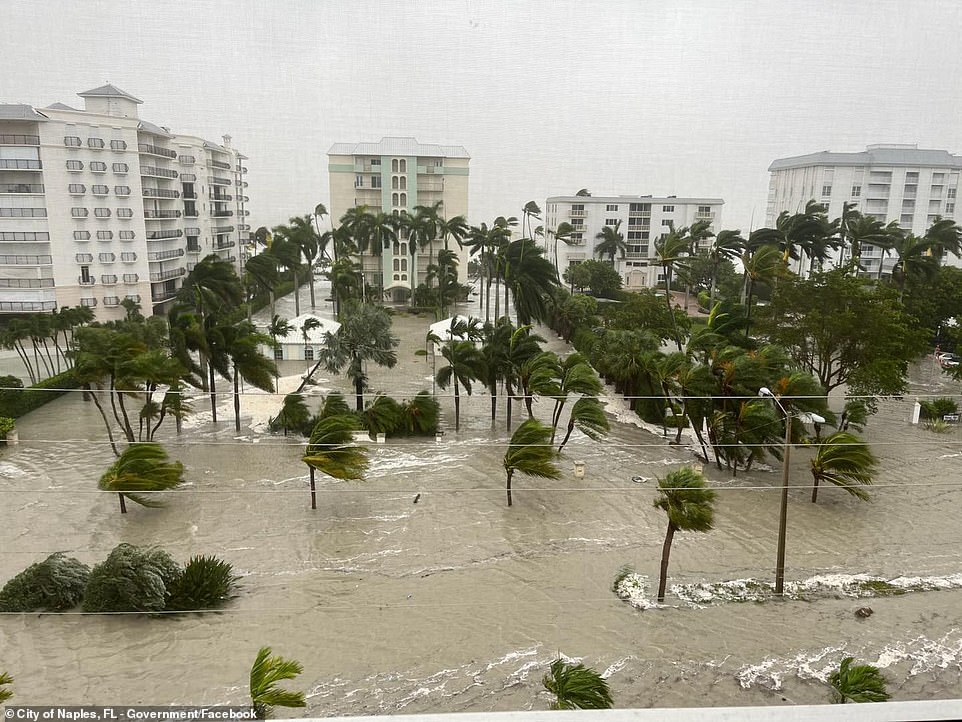 In Naples, high winds battered palm trees as the storm surge submerged houses when the hurricane made landfall

A lot in front of a grocery store in Venice became a lake, with waters reaching the trunks of some the cars parked there. Communications were nearly impossible in many spots.

Video images of the storm’s fury on local TV and social media showed floodwater nearly reaching rooftops in some communities, sweeping away cars and the ruins of homes as palm trees were bent almost in half.

Many mobile home residents took refuge in local schools and other facilities converted to emergency shelters. The area’s numerous assisted-living facilities were mostly evacuated, too.

DeSantis said Ian had generated life-threatening storm surges – waves of wind-driven seawater rushing in along the coast – of up to 12 feet in some places.

‘This is a storm that we will talk about for many years to come, an historic event,’ said Ken Graham, director of the National Weather Service.

The center of Ian’s hurricane eye hit the Florida mainland at 4.35pm just south of Punta Gorda near Pirate Harbor, according to the National Hurricane Center.

Maximum sustained winds at landfall were estimated to be 145 mph.

Fort Myers was one of the first cities to be battered by Ian, with apocalyptic images from after the initial surge showing homes decimated by its wrath as roads turned into rivers with the tsunami of floodwater.

In Naples, hundreds were reportedly stranded on their rooftops, with the population of the town being made up mostly of elderly residents.

BEFORE AND AFTER: The Pink Shell Resort in Fort Myers was battered by the storm, with the ocean blue pool being overrun with floodwater 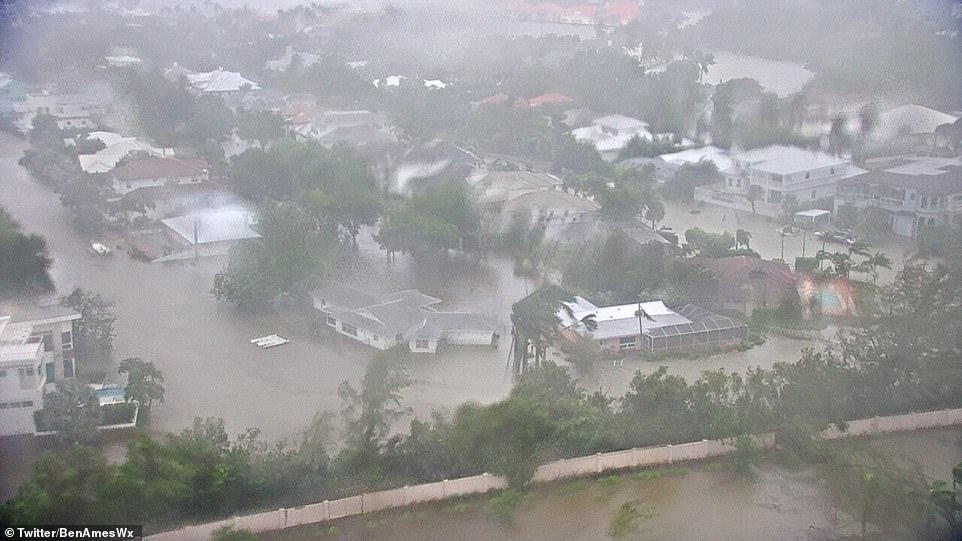 Punta Gorda survivor Joe Ketcham, 70, told AFP of the ‘relentless’ banging of metal and his fears about what was to come as the hurricane battered his home.

‘But I have the almighty savior who I prayed to. This is all material,’ the 70-year-old said of the damage around him. ‘We’re alive. We’re fine.’

Lisamarie Pierro said that the storm ‘was long and intense… the mess it left. But this is nothing. My house is still standing.’

President Joe Biden declared a ‘major disaster’ in Florida, a move that frees up federal funding for storm relief.

Ian continued to unleash drenching rains as it crept farther inland, threatening to bring more extensive flooding. Up to 30 inches of rain was forecast to fall on parts of central Florida, the NHC said.