Many of JD Wetherspoon’s pubs are often set in interesting and historic buildings that have been transformed in a way that retains their unique character.

Old post offices, cinemas, banks and ballrooms often lay empty for years before Tim Martin and his Wetherspoon team came along and saved them from destruction, instead restoring them to preserve their architectural glory.

Tim Martin wrote on the Wetherspoon website: ‘We take immense pride in the restoration and refurbishment of wonderful buildings into Wetherspoon pubs. We feel that it is right to celebrate the history of the buildings.’

With news that the company has decided to sell off 32 of its pubs in England, punters will hope that anyone taking on one of the sites will continue the company’s legacy.

Of course, some of Wetherspoon’s most iconic buildings are listed and enjoy protection from drastic changes.

This includes the Capitol in Forest Hill, south east London, which is among those listed for sale by the company. 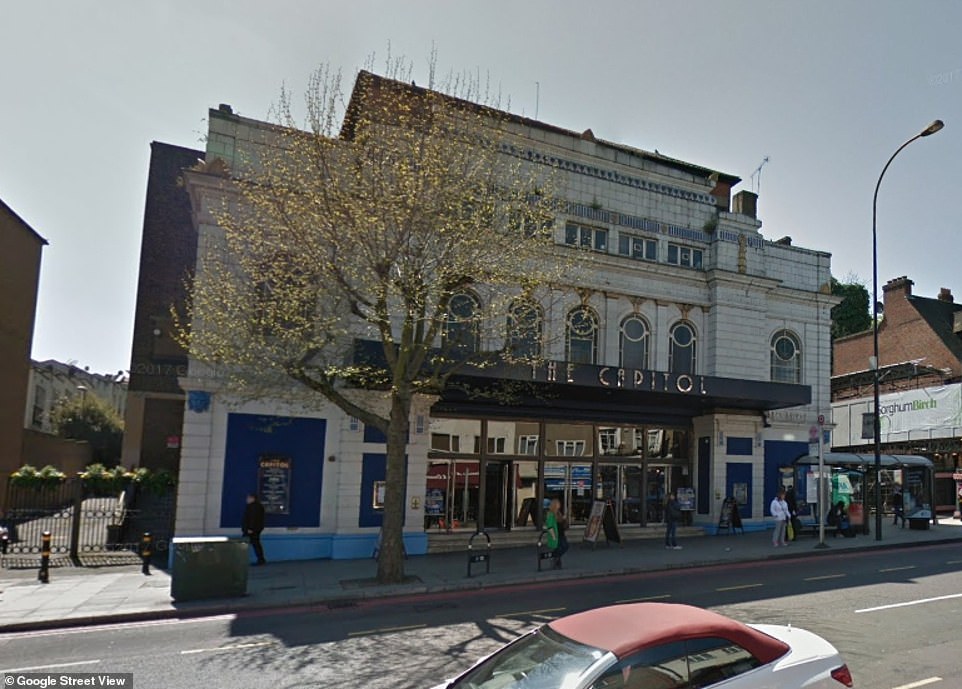 Grand and historic: The Capitol, in Forest Hill, London, (pictured) is the only listed building to go up for sale out of the 32 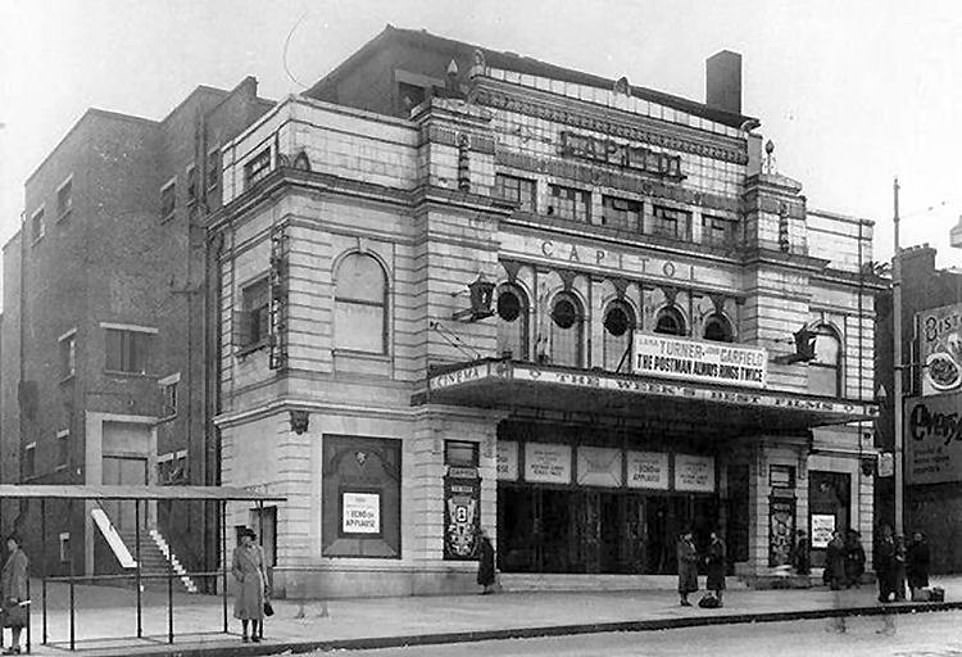 A piece of protected history: The Capitol, pictured in 1946, is the only listed building to go up for sale by JD Wetherspoon 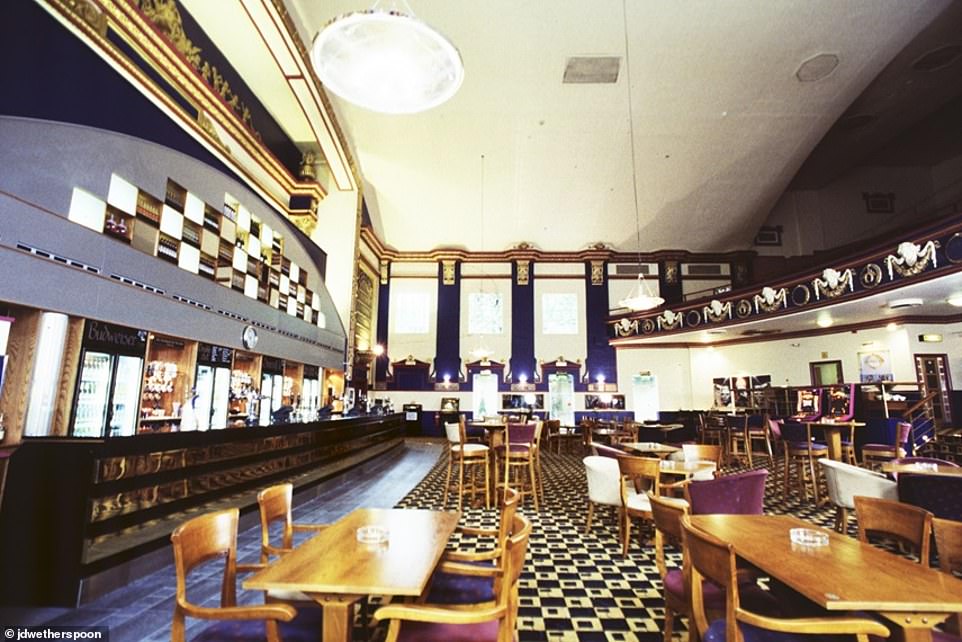 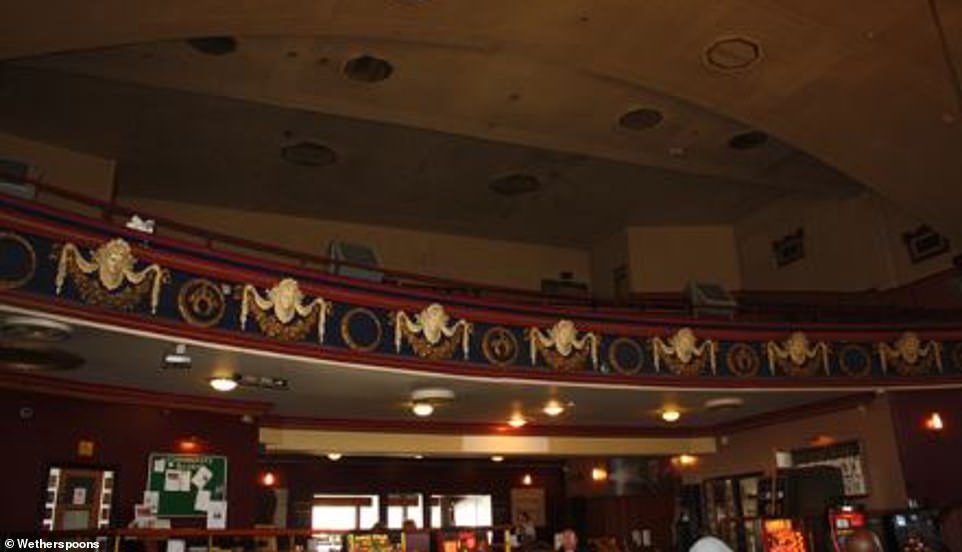 There were plans to convert and even demolish the building. However, The Capitol opened as a bingo hall in February 1978, closing in the first week of December 1996. During its bingo hall phase, it was designated as a Grade II-listed building – and became the pub in May 2001 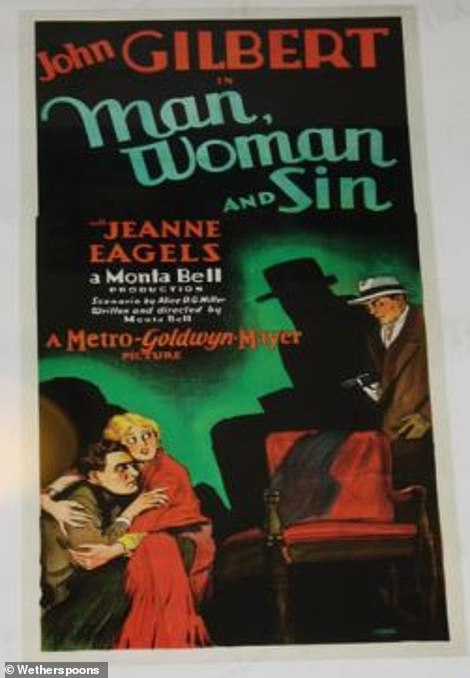 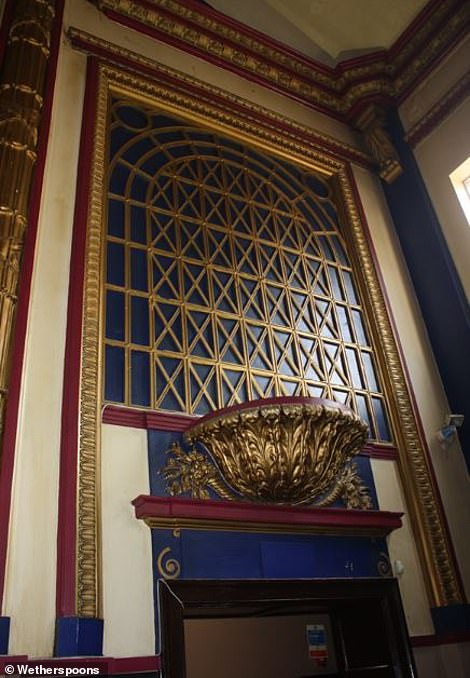 Historic: Renamed the ABC in 1968, the cinema (pictured) gave its last picture show in October 1973. The building was described in the 1990s by the then Department of National Heritage as ‘a rare survival of a complete 1920s’ cinema’

The Capitol started life as a cinema and first opened its doors to the public in 1929 with a screening of a silent movie called Man, Woman and Sin.

The cinema was renamed the ABC in 1968 before closing in October 1973 and facing demolition.

According to Ken George, author of ‘The Big 5: Lewisham Super Cinemas’, the building was designed in a Neo-Classical style by noted cinema architect John Beard and reflected an Egyptian influence, a style popular at the time following the opening of Tutankhamun’s tomb in 1922.

But fortunately, the building was saved from such plans and was, instead, used as a bingo hall from February 1978 until the first week of December 1996.

At 14,123 sq ft, the Grade II listed building is one of the largest to go up for sale, with a huge open plan seating area overlooked by the original theatre circle on the first floor, which is now used as staff rooms and storage.

The Capitol isn’t the only former cinema getting the axe by Wetherspoon as The Malthouse in Willenhall which predates the grand London venue, is also among those for sale.

The pub is built on the site of an original malthouse belonging to the Hincks family who lived in nearby Dale House. 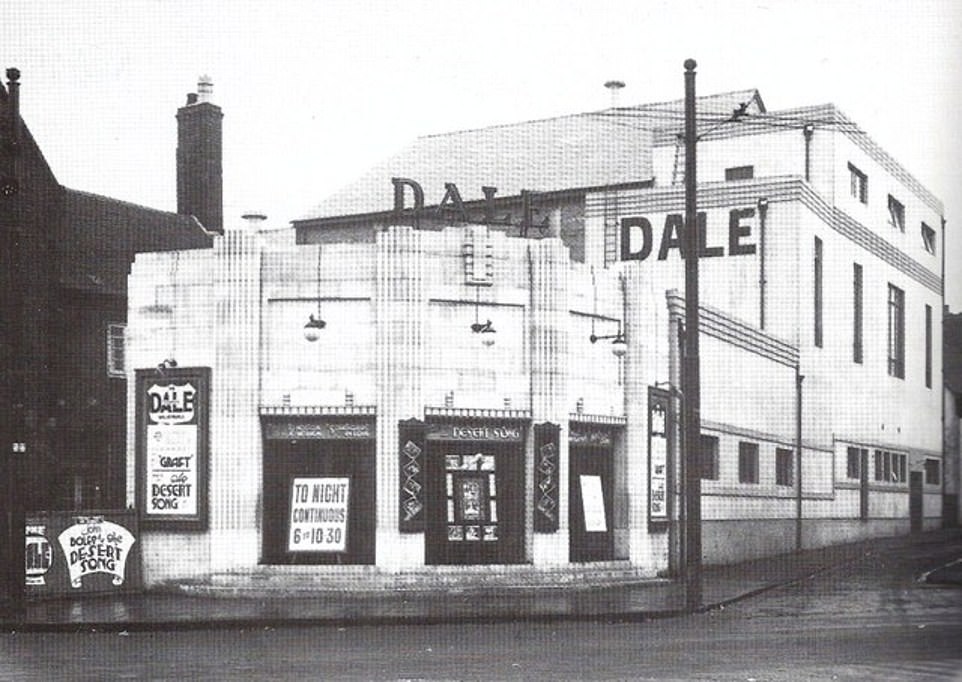 Pictured: The Malthouse in Willenhall was once a cinema known as the Coliseum before it became the Dale in 1932 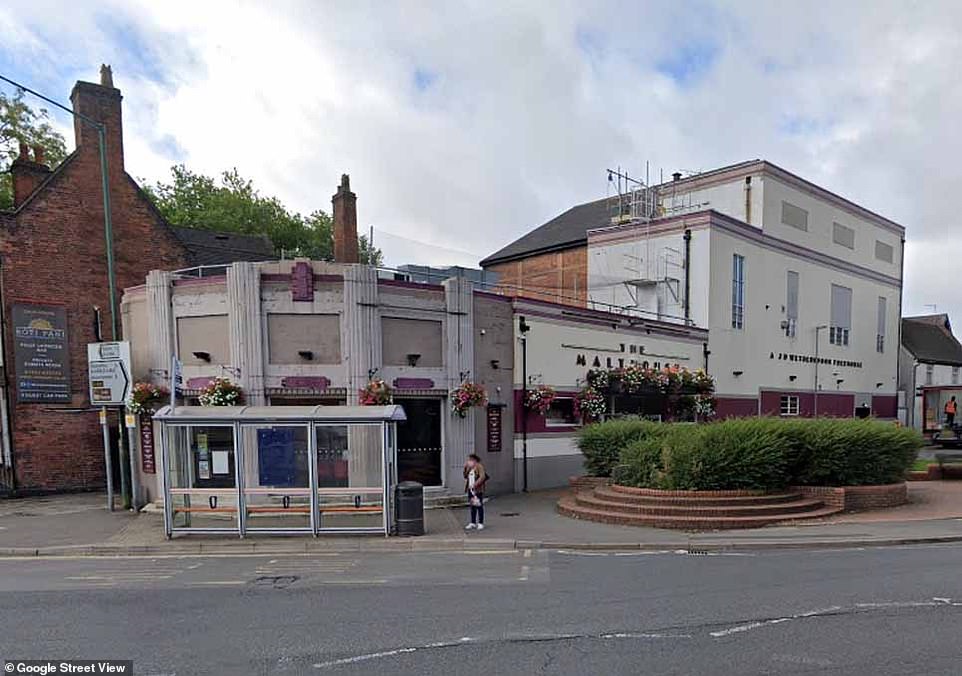 The malthouse was later converted to the Coliseum – the first cinema on the site which opened in 1914, on the eve of the First World War.

The building was much smaller than the Capitol, with historians claiming it was so cramped that part of the film overlapped onto the ceiling.

It was eventually bought by a local councillor in 1932 and was replaced with a new cinema called the Dale, with seating for an audience of more than 1,000 people.

The Dale opened its doors in 1932, showing the Technicolor sound film Viennese Nights and the building continued to operate as a cinema until 1967, when it followed a similar fate to the Forest Hill cinema and also became a bingo hall.

Unlike the Capitol, there is no grand upper circle that reflects its past as a cinema but it retains the high curved ceilings and some other original features that make it one of the more unique places to grab a pint.

Another historic building going up for sale is the Banker’s Draft in Eltham, London, set in a former bank which dates back to 1836 when it belonged to the Bank of Liverpool. 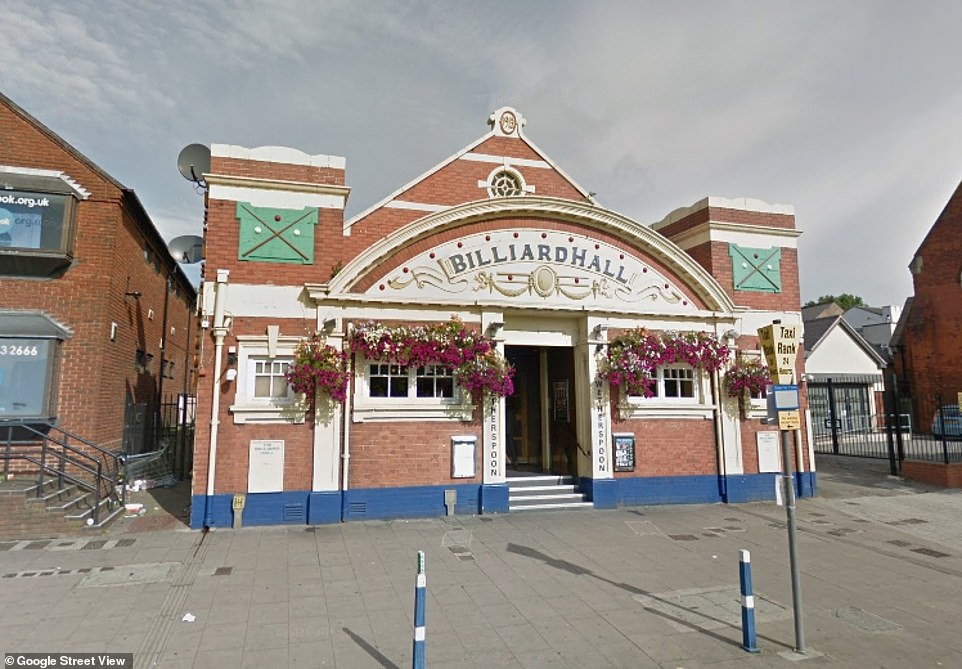 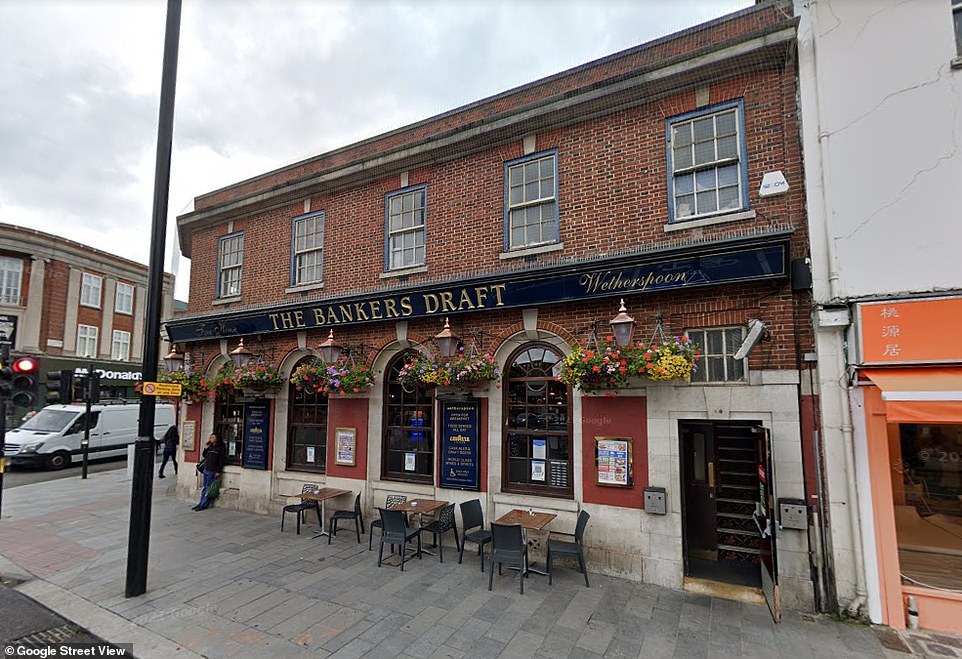 Bankers Draft, Eltham, which is for sale, is thought to be the smallest ‘Spoons in the UK and the oldest in south east London

With an area of 2,354 sq ft, it is reportedly the smallest Wetherspoon pub in the country and, according to the Campaign for Real Ale (CAMRA), is popular with lone drinkers during the day.

Meanwhile, in Harringey, the Toll Gate pub sits near the site of the old Hornsey toll gate – often associated with the famous highwayman Dick Turpin.

Located in what is now known as Turnpike Lane, the pub is just down the road from the famous toll gate, built in 1765, where High Road met Green Lanes.

The Water House, in Durham, which is also set for closure, dates back to the 1920s and was originally built for the Weardale & Shildon Water Company before it was converted into a bank.

The Last Post, in Loughton, Essex, was once the former central post office, built in the inter-war years to serve the fast-growing town.

The Sennockian in Sevenoaks started life as a free school in the 1730s with most of what stands now added in 1877.

The building was established as part of a gift of gratitude from Dick Whittington, the Lord Mayor of London, who wanted to thank William Sevenoke for his courage in the Battle of Agincourt.

For 300 years Sevenoke’s gifts were managed by the Corporation of the Free School and Almshouses of Queen Elizabeth in Sevenoaks.

Not all of Wetherspoon’s grandest sites were used for civil services. The Billiard Hall in West Bromwich, was – as the name suggests – a former purpose built hall where snooker and billiards was played.

In its heyday, the venue had 21 full size snooker tables available. 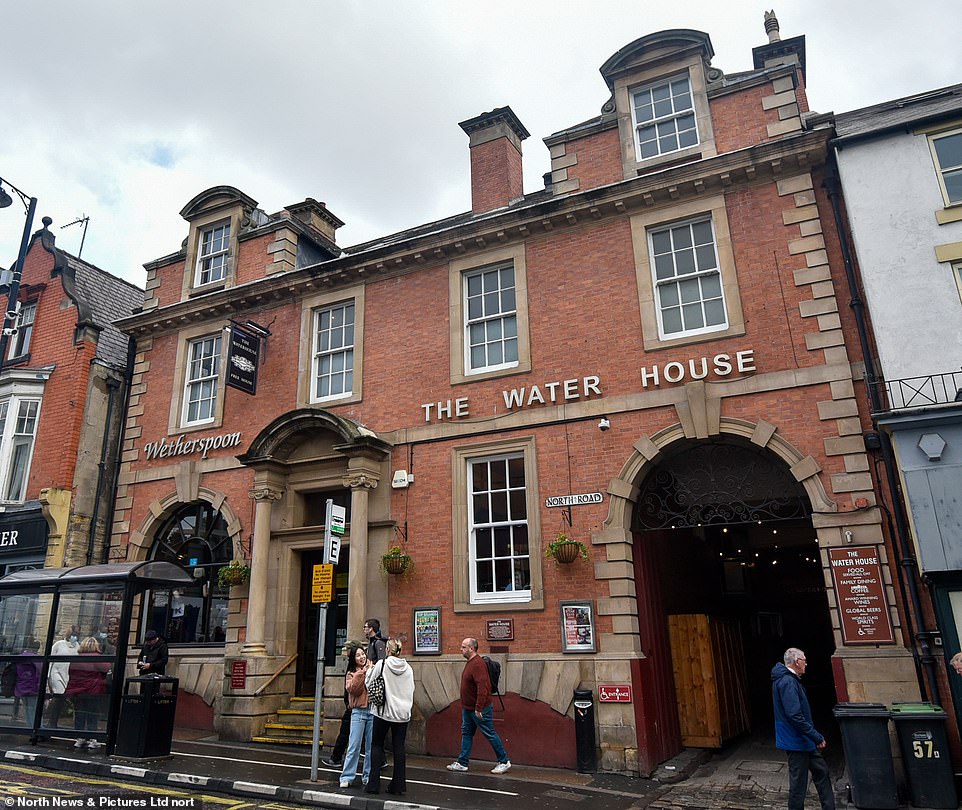 The Water House, in Durham, dates back to the early 1900s, and is among those which are set to be sold off by Wetherspoon 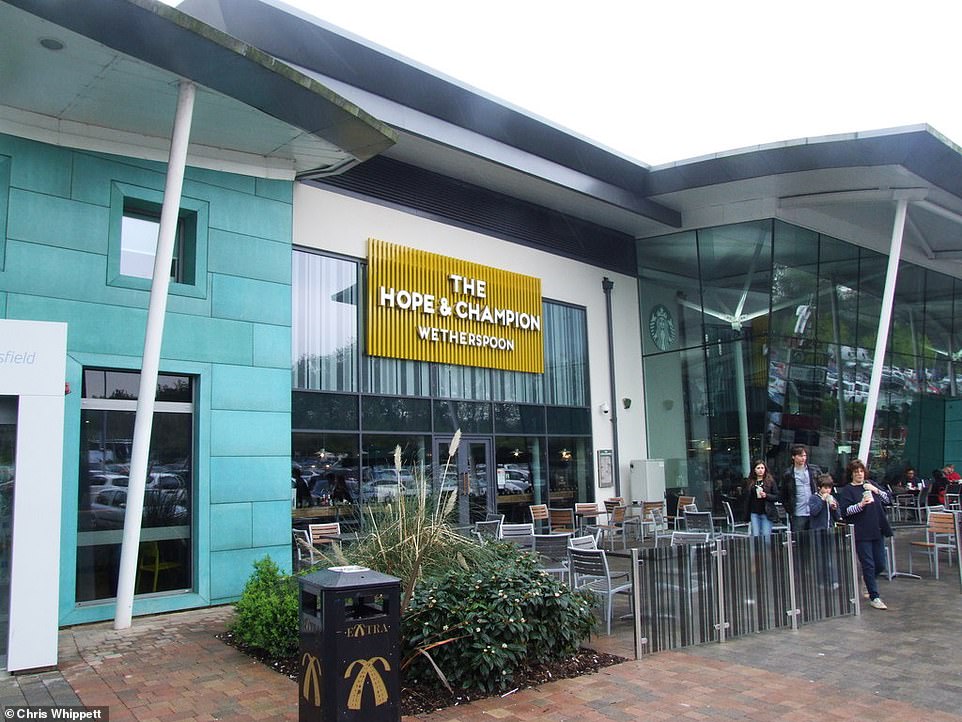 The building was finished in 1913 and Wetherspoon preserved the original facade when it was converted into the pub it is today.

The Sir Admiral Lucius Curtis in Southampton, Hants, is named after a senior officer in the Royal Navy in the 19th century and could also soon be serving its last pint.

The Sir Admiral’s building was built in 1870 for shipping offices and was once listed as a Grade II building in 1989.

It was converted into a pub shortly after, named the Cork and Bottle, and Wetherspoons acquired it in 2007.

But not all Wetherspoon pubs are located in unique and historic buildings.

The Hope & Champion is located at Beaconsfield Services off the M40 and, although the building itself is not particularly unique, it is the only pub of the 32 being sold not to be situated in a town or city centre.

It’s name is also still linked to its historic location as Beaconsfield was the first stop on the coaching route to Oxford and since 1792, stagecoaches have been passing through the area on their way from London.

This included the Hope stagecoach and the Champion stagecoach which operated in the early 19th century and from which the pub gets its name.

The pub opened by JD Wetherspoon in January 2014.

Other pubs that have historically significant names that reflect important events that took place in the town or city include the Penderel’s Oak, in Holborn, which is set to be sold off.

The pub occupies the ground-floor and cellar of Penderel House, named after Richard Penderel.

At the end of the Civil War, in 1652, he helped King Charles II to escape from Cromwell’s troops by hiding the royal fugitive in an oak tree on his country estate.

A Dukes of Hazzard-themed J D Wetherspoon? Maybe one day… How US TV show inspired name of pub chain

J D Wetherspoon founder Tim Martin qualified as a barrister in 1979 but took over his local North London pub six weeks before being called to the Bar – and established the pub chain.

Martin, 64, named the company after his primary school teacher and then added ‘JD’ because it was the nickname for Boss Hogg (Jefferson Davis Hogg) in the American TV series The Dukes Of Hazzard – of which he is presumably a fan.

He now has around 870 Wetherspoon pubs across the UK and Ireland – but the business will take a big hit from the coronavirus lockdown, which he has vehemently opposed.

Martin played a leading role in campaigning for Brexit and as the City’s most outspoken critic of the EU, he donated £224,000 to the Brexit Party. He also donated £50,000 to Boris Johnson’s Election campaign, when the Tories pledged to keep pubs open in neglected towns and villages outside London. 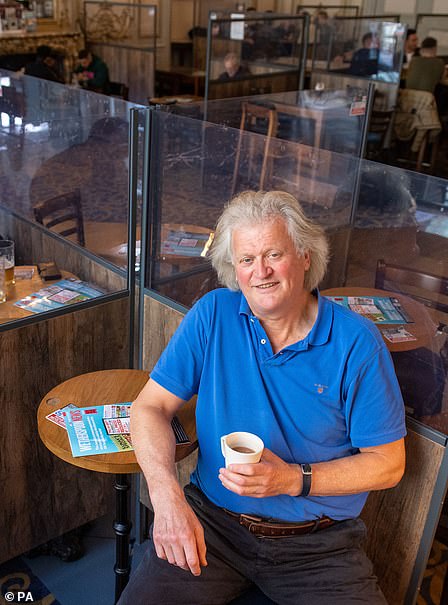 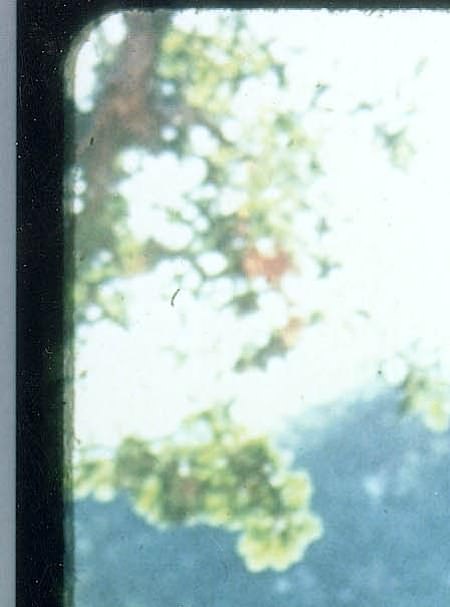 J D Wetherspoon founder Tim Martin (left) qualified as a barrister in 1979 but took over his local North London pub six weeks before being called to the Bar and establishing the pub chain. He named the company after his primary school teacher – and then added ‘JD’ because it was the nickname for Boss Hogg (Jefferson Davis Hogg ) in the American TV series The Dukes Of Hazzard – of which he is presumably a fan. (Right, the cast of the show, including, top right in white hat, Sorrell Booke as Boss Hogg)

Queen’s death certificate reveals cause and time of death

Can my children’s money be taken for the bungalow in childcare fees?