Police are searching for a gunman who was on the loose after six adults were injured in a shooting yesterday near a California school that serves recent immigrants who have fled violence in their home countries.

The incident took place around 12:45 p.m. Wednesday at Rudsdale Newcomer High School in East Oakland, authorities said, with at least some of the victims found inside the school.

Two are known to have sustained life-threatening injuries. Authorities have not said if any of the victims could be students 18 or older.

“The victims were affiliated with the school and we are determining affiliation at this time,” said Oakland Police Deputy Chief Darren Allison, although he declined to say whether students or teachers were involved.

The school serves recent immigrants ages 16 to 21 who have fled violence and instability in their home countries, according to the school’s website. It is one of four adjacent schools located on one block in East Oakland.

Allison said police were looking for at least one suspect but had no one in custody. 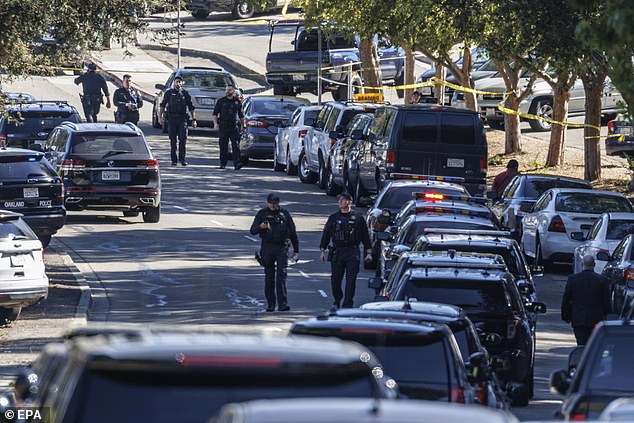 At least six people were injured after a shooting at Rudsdale Newcomer High School in East Oakland, California, where police closed the scene. 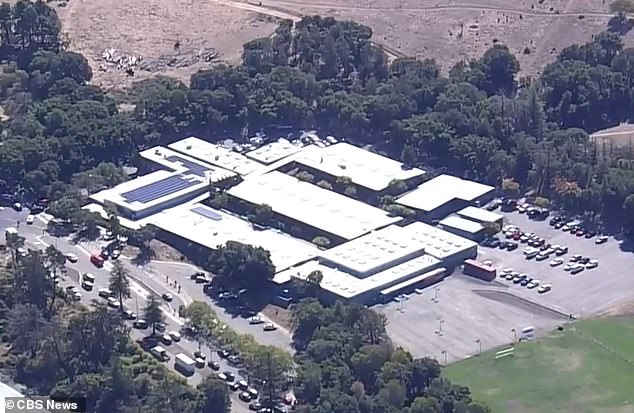 The shooting occurred in a building on Fontaine Street, a site where several schools are located, including the Bay Area School of Technology, Rudsdale Newcomer High School and Sojourner Truth Independent Study. 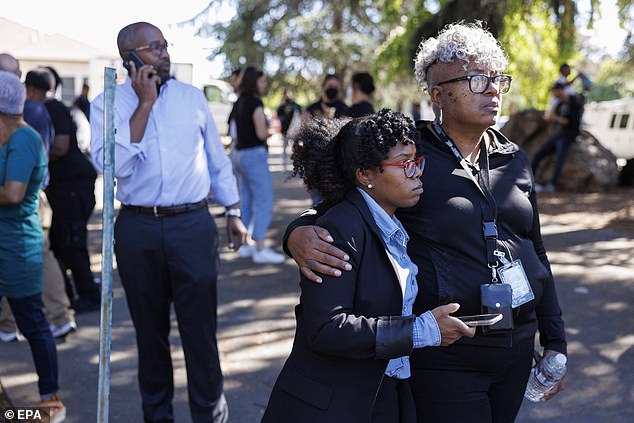 The shooting occurred in a building on Fontaine Street, a location where other schools are located, including the Bay Area School of Technology and Sojourner Truth Independent Study.

Three victims were taken to Highland Hospital in Oakland. Two were in critical but stable condition, having sustained gunshot wounds. The other was stable.

Those three victims are 18, 19 and 58 years old. Three other people were rushed to Eden Medical Center in Castro Valley, where one was treated and released, one is pending release and one is in stable condition.

Oakland Mayor Libby Schaaf confirmed that all the victims were adults. 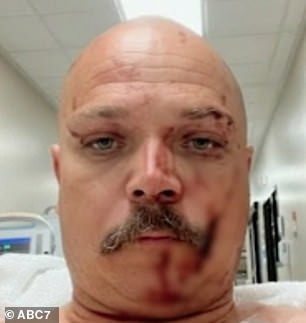 Jason Arbuckle was reportedly grazed by a bullet while hanging a trophy case.

Police are looking for a suspect, however there may be others involved. A mother told KTVU that she witnessed five possible gunmen. ⁣ Cops said they currently have no one in custody.

According to cell phone video from inside the school when officers arrived on the scene, a student can be heard telling them there were seven shots fired.

The Bay Area School of Technology posted an Instagram post stating that its campus security guard was injured in the shooting, but was not seriously injured.

Jason Arbuckle, a carpenter in the Oakland Unified School District, said ABC7 that a bullet grazed his head and left some fragments. He and a team were hanging up a trophy case when the shooting broke out, they report.

Other parents described a second victim who rushed to help after the shooting.

“Our deepest condolences are extended to the families and friends of the six people who were injured during a shooting that took place near our campus this afternoon,” they wrote.

They added that they praised their staff for “jumping into action” and enforcing their lockdown protocols once they became aware of an active shooter on campus.

‘We also want to thank each of our students for the tremendous way they handled safety protocols. They are superstars! Please hug them tight for us.

Rudsdale Newcomer High School says its students, all recent immigrants fleeing violence and instability, are working to support themselves and their families while also pursuing a high school diploma.

“Due to their immigration experiences, our students have faced a lot of trauma,” the school says on its website.

The situation is no longer active, authorities said. Police said the suspect is no longer in the area of ​​the school. 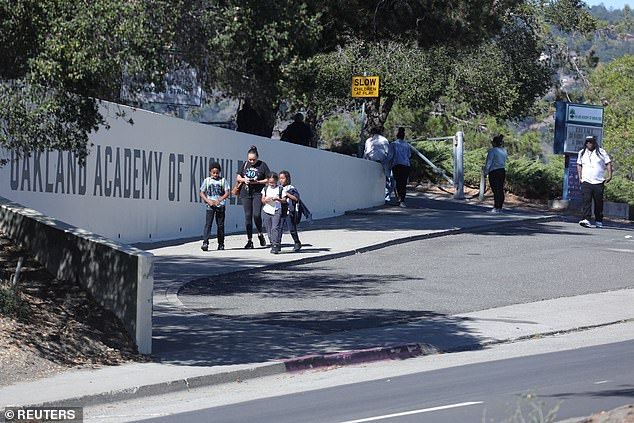 Children and parents are seen being led out of the school after the shooting. 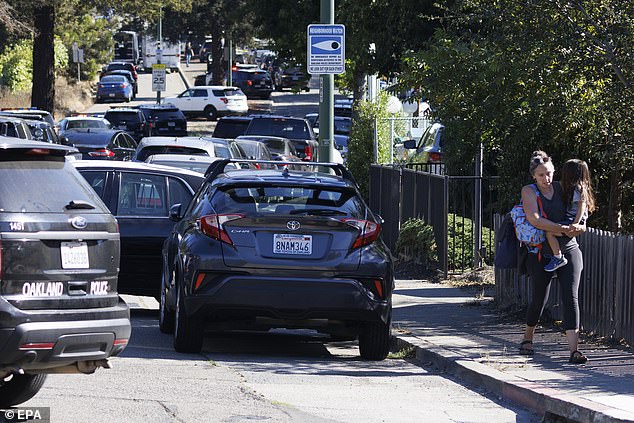 A woman told local CBS Bay Area news that she heard gunshots from the buildings just after noon.

But the children, believed to be as young as 18 and hardly in kindergarten, were evacuated from their buildings.

Treva Reid, an Oakland councilwoman and mayoral candidate, said investigators told her the shooting could be linked to increased “gang and group violence.”

Reid went on to say that the shooting is proof that the city has not invested enough in programs and initiatives to help children succeed.

“We’ve divested from them, so the kids are taking matters into their own hands,” Reid said.

“They’re doing things in ways that are not healthy to resolve conflict and that’s what we’re seeing today.”

Community activist Nina Carter says that for all the rhetoric around school funding, things won’t change if Oakland students can’t relate to those in charge.

Carter is part of a Violence Breakers team that mediates conflicts between groups and gangs.

A woman told local CBS Bay Area news that she heard gunshots from the buildings just after noon.

Other horrified parents described their panic after learning their children’s schools were closed. One mother said after hearing the shots, “I was thinking the worst.” 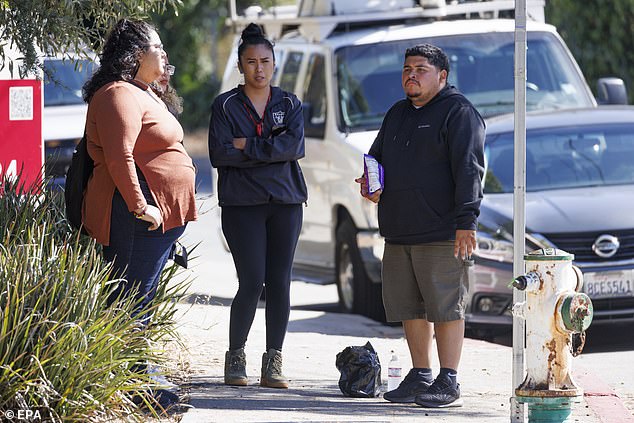 School staff gather at St. Cuthbert’s Episcopal Church as police and investigators work the scene of the shooting. No one has been arrested yet.

The Oakland Unified School District said in a statement, “There was an incident today at the King Estate campus on Fontaine Street, which is home to co-located Rudsdale Continuation and Newcomer High Schools, BayTech Charter School, and the headquarters of Sojourner Truth.” Independent Study. , which has no students on the site.

The campus is close to the Oakland Academy of Knowledge (OAK), but it is important to note that the incident was NOT at OAK, nor did it have anything to do with that elementary school.

“We currently do not have any information beyond what Oakland police are reporting.”

John Sasaki, a spokesman for the Oakland Unified School District, said in a statement that counselors were available to students.

Television footage showed dozens of police cars and yellow tape on the street in front of the school and students leaving nearby campuses.

‘We’ve seen nearly double the victims of violent crime that we’re seeing here at our facility (Highland Hospital). So something has changed,” Jackson said.

City Councilman Loren Taylor, who was away from the school, declined to confirm any details about the incident, telling KTVU-TV, “There were guns on our school campuses where our babies were supposed to be protected.” .