Three Sunshine State colleges took action Tuesday to save home football games as Hurricane Ian approached, while the NFL is hopeful Sunday’s Buccaneers-Chiefs game in Tampa can go ahead as scheduled.

Although South Carolina is a safer distance from the big storm, the Gamecocks didn’t want to wait to make a decision regarding their game against South Carolina State. Those schools will now play Thursday night, two days earlier than previously scheduled and at least one day before Ian arrives in the area. 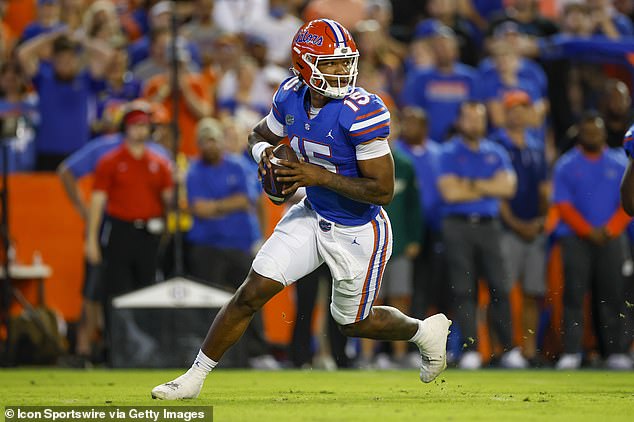 Florida Gators quarterback Anthony Richardson (15) looks for a receiver during the game between the South Florida Bulls and the Florida Gators on September 17. 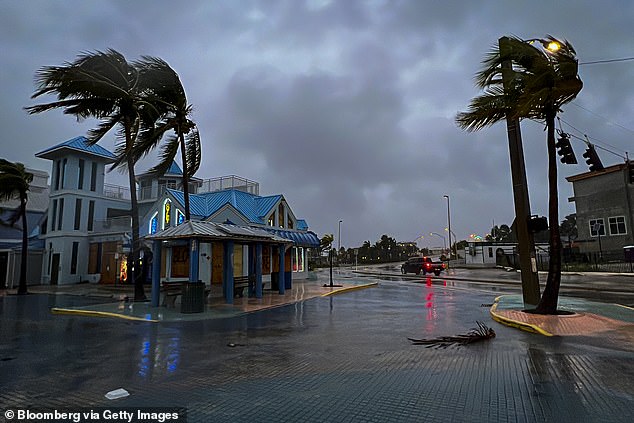 Fort Myers Beach ahead of Hurricane Ian in Fort Myers, Florida on Wednesday 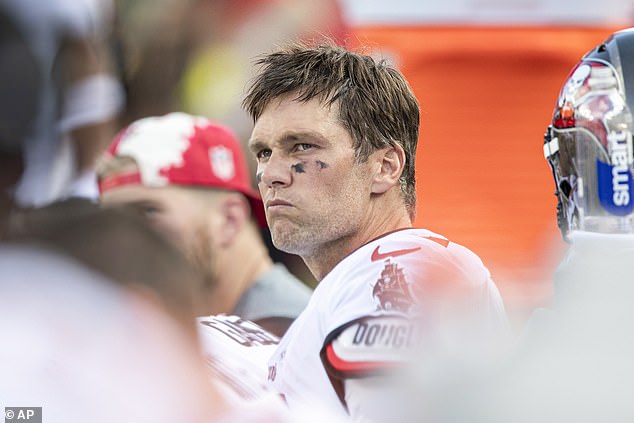 Tom Brady and the Tampa Bay Buccaneers will spend the week training in Miami, but they still hope to host the Kansas City Chiefs at Raymond James Stadium on Sunday night.

Stetson canceled its home game against San Diego scheduled for Saturday in the Pioneer Football League.

Meanwhile, 23rd-ranked Florida State and 22nd-ranked Wake Forest are ‘closely monitoring’ the storm as they hope to play as planned in Tallahassee.

“We remain confident that we will be able to safely host Saturday’s football game against Wake Forest at its scheduled start time,” FSU athletic director Michael Alford said Wednesday.

“It’s one of those deals where you certainly expect the ACC office to make the right call,” Clawson said. And if they don’t do it, we will. We are not going to travel there and put anyone at risk. … Obviously, this is in the hands of the league and Florida State. We hope they make the right decision. But if we feel that there is any danger for our players to fall there, we are not going to go.’

The storm is expected to hit the southwest coast of the state on Wednesday. It hit western Cuba on Tuesday as a major hurricane, with nothing to stop it from intensifying into a catastrophic Category 4 storm before reaching Florida, where authorities ordered the evacuation of 2.5 million people before it crashes to earth on Wednesday. 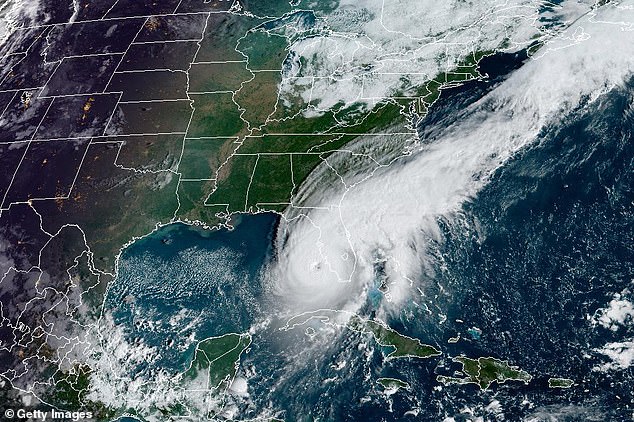 In this NOAA image taken by the GOES satellite at 13:26 UTC, Hurricane Ian moves toward Florida on Wednesday. The storm is expected to hit the southwest coast of the state on Wednesday. It hit western Cuba on Tuesday as a major hurricane, with nothing to stop it from intensifying into a catastrophic Category 4 storm before reaching Florida, where authorities ordered the evacuation of 2.5 million people before it became crash to earth on Wednesday.

Universities across the state closed campuses for the week. But football is big business and a much-needed source of income for many. Playing the cross-country game in Florida nets Eastern Washington $750,000, a significant payday for a school with an athletic budget of about $17.5 million.

The Gamecocks last moved a game due to weather in 2016, playing a game scheduled for Saturday on Sunday.

The NFL’s Tampa Bay Buccaneers moved their football operations to the Miami area Tuesday in preparation for Sunday night’s game against the Kansas City Chiefs.

The Buccaneers are expected to practice at the Dolphins’ training complex in Miami Gardens beginning Wednesday. So far, there have been no changes for the game, which is scheduled for Sunday night at Raymond James Stadium in Tampa.

“We are not discussing any potential (relocation) sites,” the NFL said in a statement Wednesday. We continue to monitor the storm and are in constant communication with clubs and local authorities. The decision could be made until Friday.

The Dolphins play in Cincinnati on Thursday night. They changed their travel plans for Wednesday and leave a few hours earlier than originally scheduled, in anticipation of severe weather.

Also in Tampa, the Rays have other concerns besides clinching an AL wild card. Opening a three-game series in Cleveland, players and coaches were on the lookout for the impending hurricane. The Tampa Bay-St. The Petersburg area was last directly hit by a hurricane in 1921.

“Watching the news, watching the computer,” Rays manager Kevin Cash said. “I know the Bay Area has been pretty lucky for many, many years, but just thinking of everyone there and hopefully people have done the right thing to prepare and wherever it goes, it doesn’t hit as hard as speculation.”

Meanwhile, the NHL’s Tampa Bay Lightning postponed preseason games scheduled to be played at home Wednesday against Carolina and Thursday against Nashville.

The NBA’s Orlando Magic called off practice on what would have been their second day of training camp Wednesday and said their plans for Thursday were uncertain. Forecasters say Orlando, in the central part of the state, could see flooding and, at a minimum, tropical storm conditions as Ian moves closer to the coast.

WORLD CUP 2022 LIVE: England prepares for round of 16 clash with Senegal