The pound defended itself on global currency markets after falling to a record low against the US dollar.

In another day of turmoil in financial markets around the world, sterling climbed back above $1.11, putting it very close to where it was before Foreign Minister Kwasi Kwarteng unveiled last week’s controversial mini-budget.

The pound has gained about 7 percent against the dollar since falling to a record low below $1.04 on Monday. It rose against the euro, topping 1.13 euros for the first time since last week. 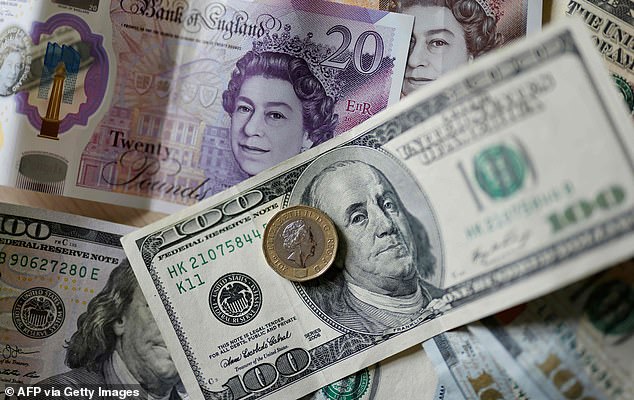 Recovery: The British pound rose back above $1.11, putting it within walking distance of where it was before Chancellor Kwasi Kwarteng delivered last week’s controversial mini-budget.

Like other currencies around the world, the British pound has been crushed by the dollar this year as the US Federal Reserve moves to rein in soaring inflation through higher interest rates. The dollar has also benefited from its status as a safe haven in times of economic hardship.

But the pound jumped sharply lower in the wake of the mini-budget as investors fretted over £45bn of unfunded tax cuts and a cap on energy bills that could cost £100bn. .

The Bank of England has also faced criticism for moving too slowly and meekly to combat inflation, which this summer topped 10 percent for the first time in four decades.

The currency chaos spilled over into bond markets, forcing the Bank to intervene on Wednesday with a promise to buy long-term UK government debt to restore order.

In a speech to business leaders in London last night, Huw Pill, chief economist at the Bank of England, said there would be a “meaningful” response to recent events when the rate-setting Monetary Policy Committee meets in early November.

Intervention in the bond markets and the prospect of further rate hikes boosted the pound.

Brian Daingerfield, head of G10 FX strategy at NatWest Markets in Connecticut, said: ‘The Bank of England took a pretty decisive step in stabilizing the markets. And that is being taken positively by the foreign exchange market.’

But with rampant inflation and rising global interest rates, government borrowing costs in the form of bond yields rose again in the UK, US and Europe.

Market analyst Neil Wilson said: ‘I have rarely seen sentiment this bad. “We are doomed” seems to be the prevailing mood.

‘We haven’t seen bond markets in such a state of flux for many years. Stocks hover at two-year lows and the dollar serenely advances, crushing everything in its path.

Against China, US Signs Broad Deal to Aid Pacific Nations

‘We have been officially censored!’ Russell Brand leaves YouTube