A farmer desperate to “save his home” from flooding resorted to building a barricade of animal manure, but his neighbors shared concerns about water pollution.

Tommy Cannon decided to improvise when heavy rain on December 30 caused a stream to burst its banks and water to pour down his street near Dumfries, Scotland.

The 38-year-old farm worker claims he couldn’t drive into town for sandbags, but instead used manure from his work to “save his house from a flood.”

A viral video shows an excavator dropping piles of brown fertilizer all over his driveway as he laughs and says, “You know you’re a farmer when you use manure as a weir.” 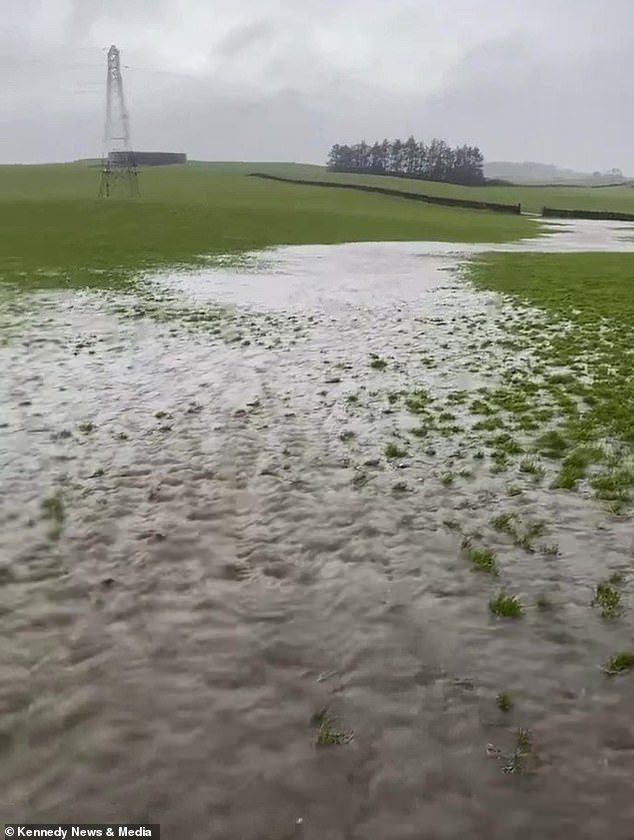 He decided to improvise when heavy rainfall caused a stream to overflow and water to flow down his street. Pictured: The field behind Tommy’s flooded backyard 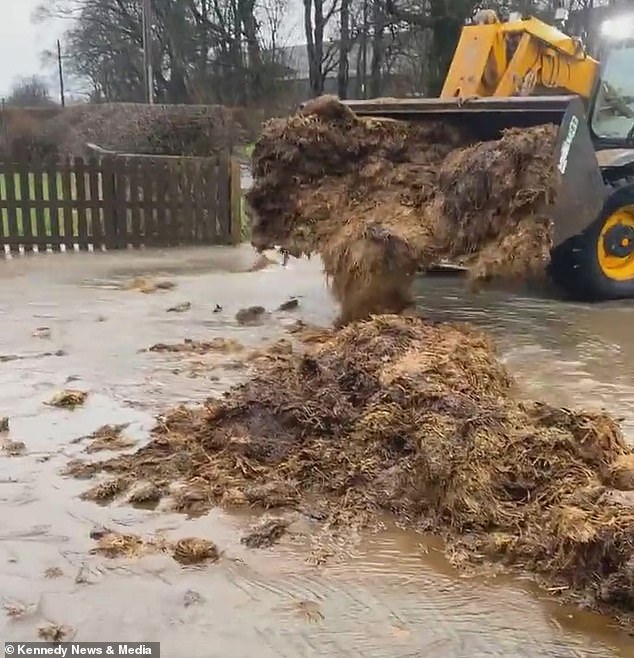 Many Facebook users praised his “quick thinking” and said the act was a “no-brainer” as “emergencies sometimes call for desperate measures.”

However, some Facebook users said they were surprised environmental chiefs didn’t visit him, fearing his smelly barricade might have contaminated local water.

An irate farmer known as Dan branded him “fat” and blamed actions like Mr. Tommy’s on the “red tape” surrounding spreading manure in fields. 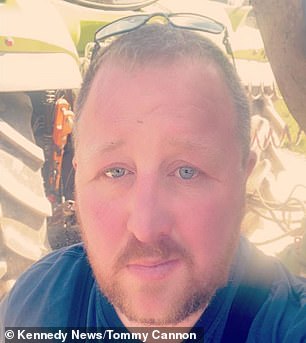 Tommy Cannon said he used manure to ‘save his home’

Tommy hit back with a “if you had brains you’d be dangerous” joke before sharing a video of his flooded driveway, backyard and the fields beyond to show his plight.

The Scottish Government’s Water Environment Regulations prohibit fertilizers such as manure from being stored or applied on ‘soggy’ land.

Tommy said, “It was what I had to do to save my house.

It was all I had to block the road. It was not possible to get to the city by road, so I couldn’t get sandbags.

‘A brook had overflowed its banks and flowed like a river over the road. I was afraid my house would be flooded.

“It’s stored in areas with good drainage on the farm, so it took us five minutes to get it. In the picture of the next day you can see that I cleaned everything up.

“We had a really heavy downpour and within an hour I saw the water around my house swell up and my garage started flooding. If I hadn’t done this, my house would have been flooded for sure.

“I realize a lot of people will say it’s irresponsible, but with the amount of water flowing down the road, it would be well diluted and no one would notice.” 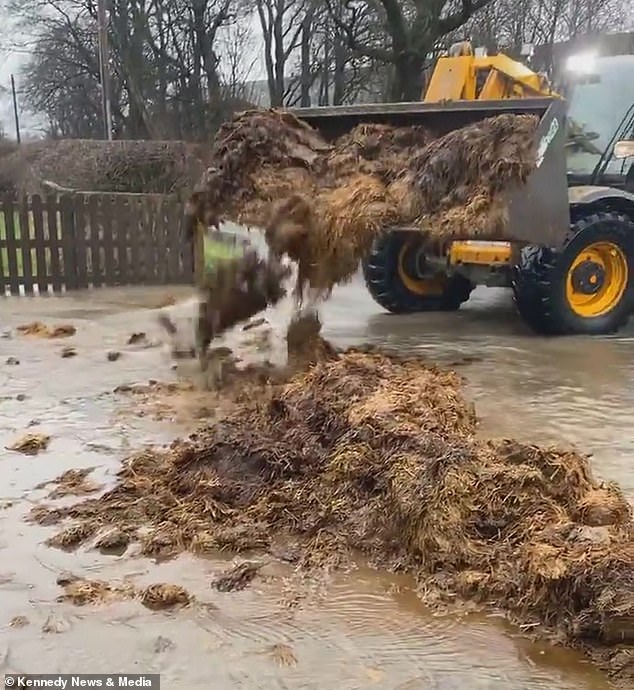 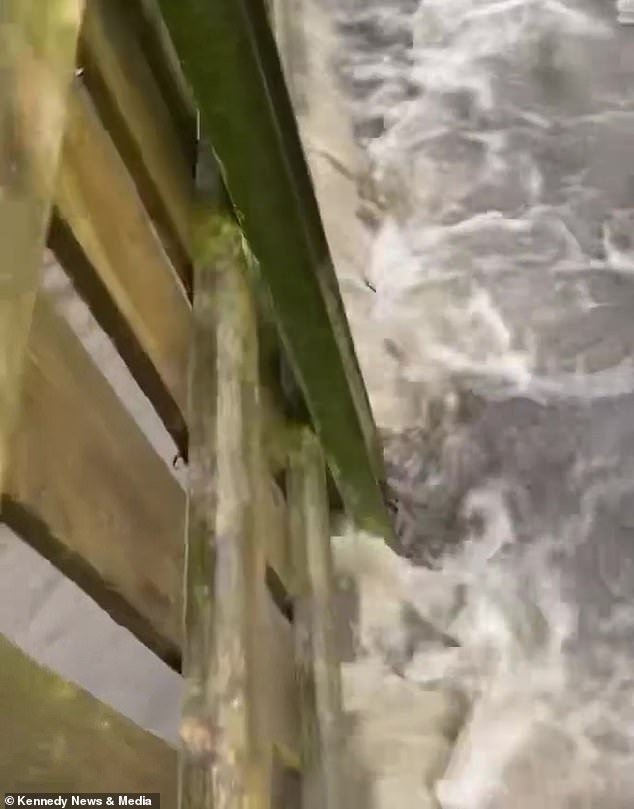 The 38-year-old farm worker claims he couldn’t drive to town for sandbags and so used manure. Pictured: The field behind Tommy’s flooded backyard 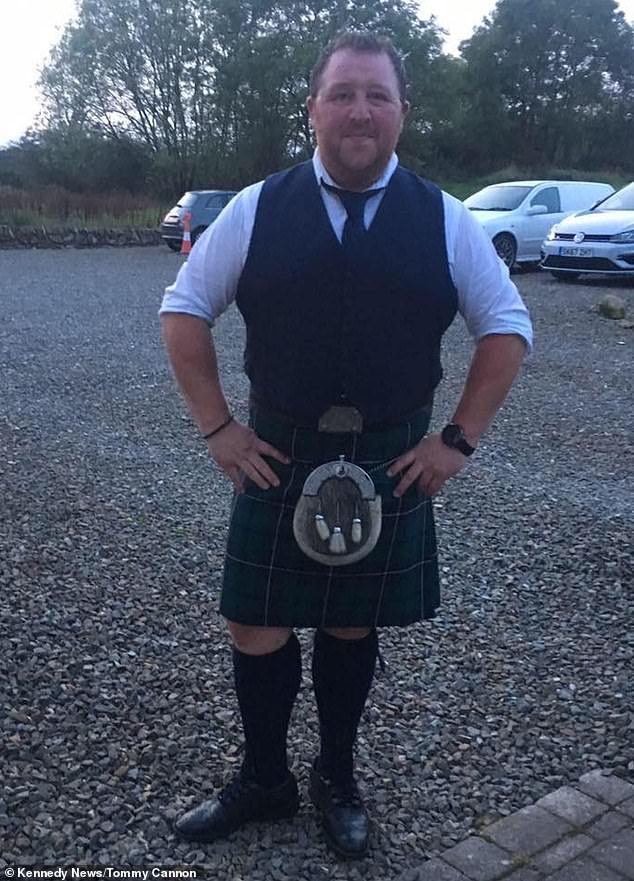 Tommy Cannon, who lives near Dumfries in Scotland, defended his actions against critics

Tommy explained that his area had four inches of rain in 12 hours and claims he cleared it all up by 10:30am the next morning.

The farmer declares that the manure is back in storage and his driveway has been washed before asking if there is anything else disgruntled farmer Dan would like him to do.

Tommy says the rain receded throughout the day, but the water continued to flood his way until New Year’s Eve, when he cleaned up.

The contractor was pleased that most of the comments supported his improvisation and brushed off Dan’s criticisms as “his problem.”

His post simply reads ‘drastic times call for drastic measures’. It did work’.

One commented, “Wow, needs must. I’d rather have this in my driveway than have the house flooded. Not a bad idea actually. Well done.’

Another said, “You grabbed what you had on hand and I don’t blame you either. Well done for the quick thinking.’ 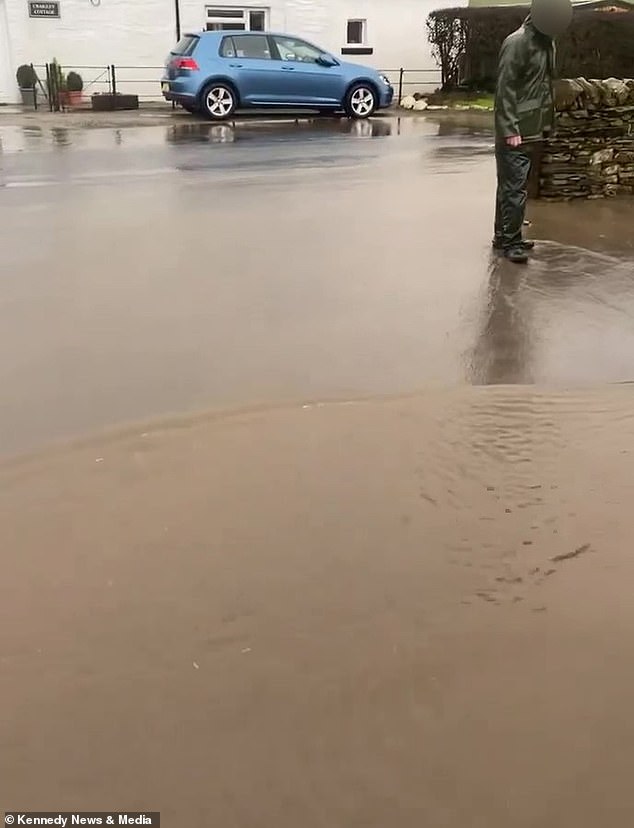 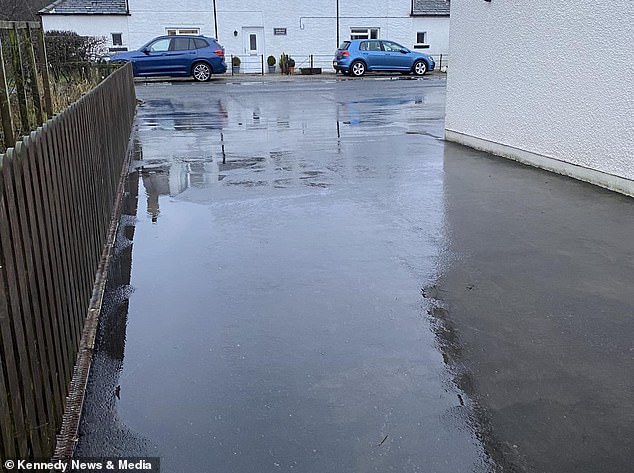 The Scottish Government’s Water Environment Regulations prohibit fertilizers such as manure from being stored or applied on ‘soggy’ land. Pictured: Tommy’s flooded driveway 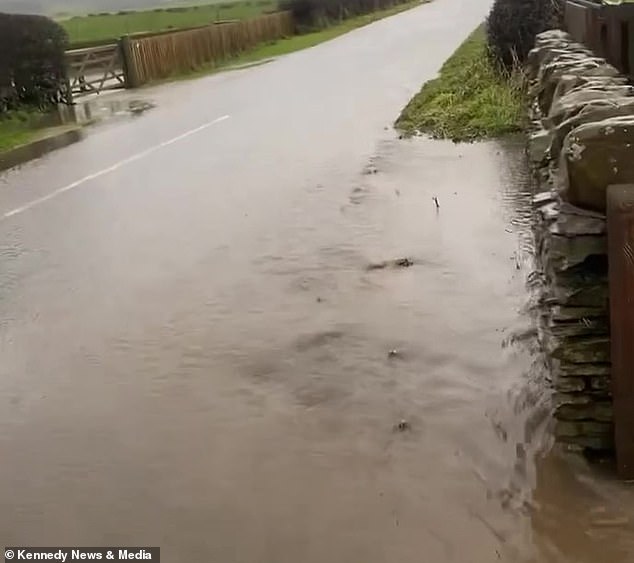 The farmer defended his action, saying, “If I hadn’t done this, my house would have been flooded for sure.” In the photo: the road outside Tommy’s house

A third explained, “If the place flooded, the water would have reached the muck and had the same effect anyway!”

But Farmer Dan said, “What a***. Than [he] wonders why the Environment Agency is banging on the door. It’s such idiots who make so much trouble for everyone else.’

Another agreed, saying, “Amazed that the environmental department didn’t tell them about water pollution!”

The Scottish Environment Protection Agency confirmed that no complaint has been made about the incident and declined to comment further.

Designers have envisioned what “flood-resistant” homes will look like in 2072 with rising sea levels, including floating foundations, inflatable rafts and top-floor kitchens.

The full exchange between Tommy and Dan

Dan said, ‘What a***. Than [he] wonders why the Environment Agency is banging on the door. It’s such idiots who make so much trouble for everyone else.’

Tommy replied, “[Middle finger emojis]. Spin that, k***. If you had brains you’d be dangerous.’

One member added: ‘Can’t we resort to nasty comments? Sometimes emergencies call for desperate measures. One grabs for the nearest thing to avert a crisis.”

Dan said, “Obviously you’ve never had to calculate the nitrates each cow produces in a year and move the dung pile every two years and [keep it] 20 meters away from a watercourse.

‘Then these people like to make the work 10 times more difficult than it needs to be. Do not put bales of straw or buckets of soil in the manure. How fat can people be?’

The user defended Tommy again, saying, “Maybe a bale of straw would have drifted away? Or was the straw not as accessible as the dunghill?’

Tommy added, “well said. I appreciate what I did, maybe not to everyone’s taste, but it was that or my house flooded. As far as I’m concerned, I’ve done what I had to do.’

Tommy’s message the next day said, ‘For the benefit of Dan, this is what my ride looks like today after cleaning up the mess left by the flood. The manure is back in the middle and the tar has been washed.

“Is that okay with you or is there something else you would have liked me to do, given that you were so well informed about my efforts to stop the flood yesterday?”

Is it stupid to color code your books? A home library is the new pride of the middle…

Sheetz blasted for banning workers from having…

Home and Away: Esther Anderson shows off her incredible…

U.S. Plans to End Public Health Emergency for Covid in May