By Jake Nisse for Dailymail.Com

A fan who showed up to crash the Dolphins’ practice on Wednesday recorded the team and leaked footage of the session online before their matchup with the Bengals.

Video of the practice surfaced online Thursday afternoon, including on Barstool Cincinnati’s Twitter page, and shows the Dolphins rehearsing their plays from an upper-level view.

NFL security is now investigating the issue, a source said. oops, since the images come from a closed practice.

The session took place at Nippert Stadium at the University of Cincinnati.

The incident also prompted a Dolphins social media staffer to contact the Barstool Cincinnati page to ask that posts containing the images be “immediately deleted.”

However, Barstool founder Dave Portnoy, who posted the email on his Twitter account, said the posts will not be removed, as he mockingly posted a thumbs-down gif as evidence of his decision. 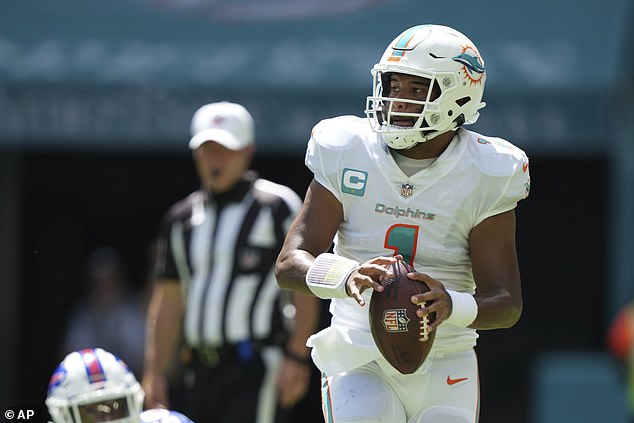 The Dolphins released images of their players walking out onto the practice field Wednesday, but otherwise revealed little about the session, unlike the leaked posts.

Miami enters Thursday night’s clash 3-0 with hugely impressive wins against the Ravens and Bills already under their belt.

The Bengals lost their first two games of the season but have a chance to get to 2-2 after beating the Jets last weekend.