Retired Geelong AFL great Joel Selwood has been ‘exposed’ for labeling a young boy a ‘dog’ on Twitter, but the exchanges were anything but aggressive, in fact they were hilarious.

The 34-year-old champion midfielder, who this week announced he would hang up his boots after guiding the Cats to another flag last Saturday at the MCG against the Sydney Swans, is one of the good guys in the AFL.

In the series of clips, young Ted has repeatedly told the four-time first-place winner that he proudly follows the GWS Giants and often calls out Selwood and the Cats.

The club player, who made his debut in 2007 and racked up 355 appearances, has taken the jokes in stride, also quick to put the youngster in his place. 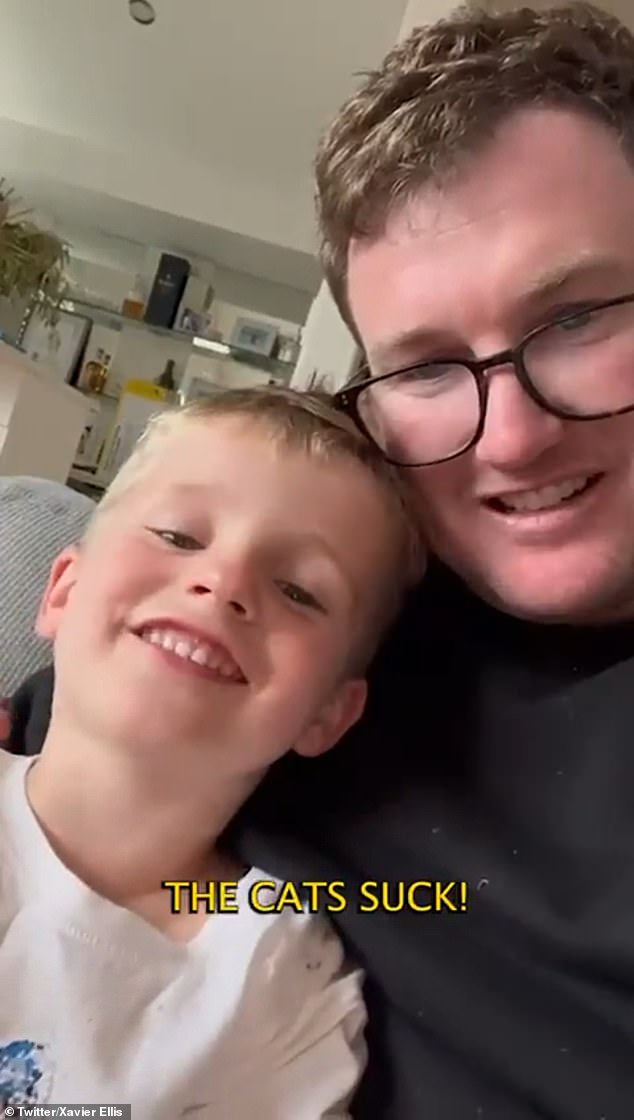 Among the best exchanges were Selwood playfully declaring ‘the Giants suck’ and ‘come on the Cats’ before adding that the little boy was ‘wearing a trash orange sweater (GWS)’.

Not holding back on another clip, Ted labeled Selwood a “slow coach” to which the classy midfielder responded by stating that he would “end up in jail” if he made any more references to the Geelong veteran star’s mobility.

Before last weekend’s grand finale, Ted was up to his old tricks and informed Selwood that “the Cats suck.”

Finally, Ted showed up, seen in a Cats jersey days before the Selwood team gave the Swans a football lesson on the biggest stage.

The clip concludes with Selwood confirming that he is retiring as he is “too old and too slow”, to which Teddy replies “don’t get fat like my dad”.

Selwood stated that he was hanging up his boots earlier this week after a brilliant run chasing Sherrin. 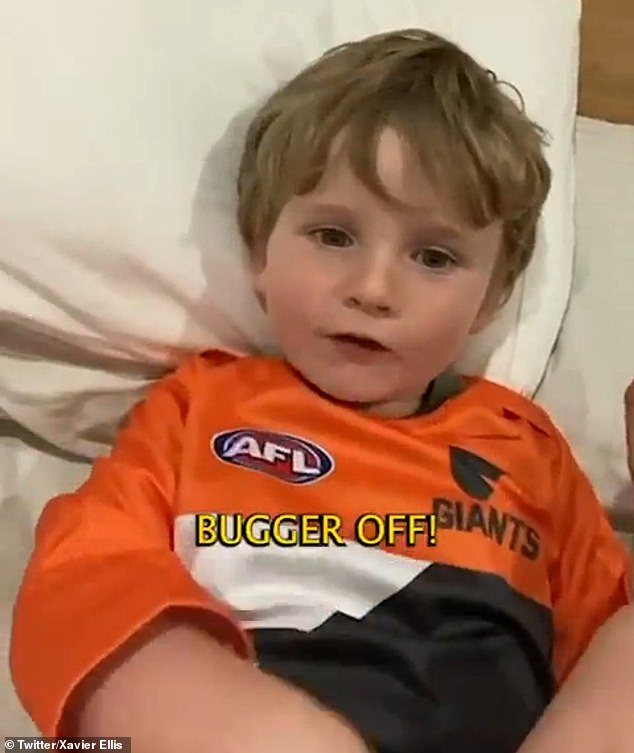 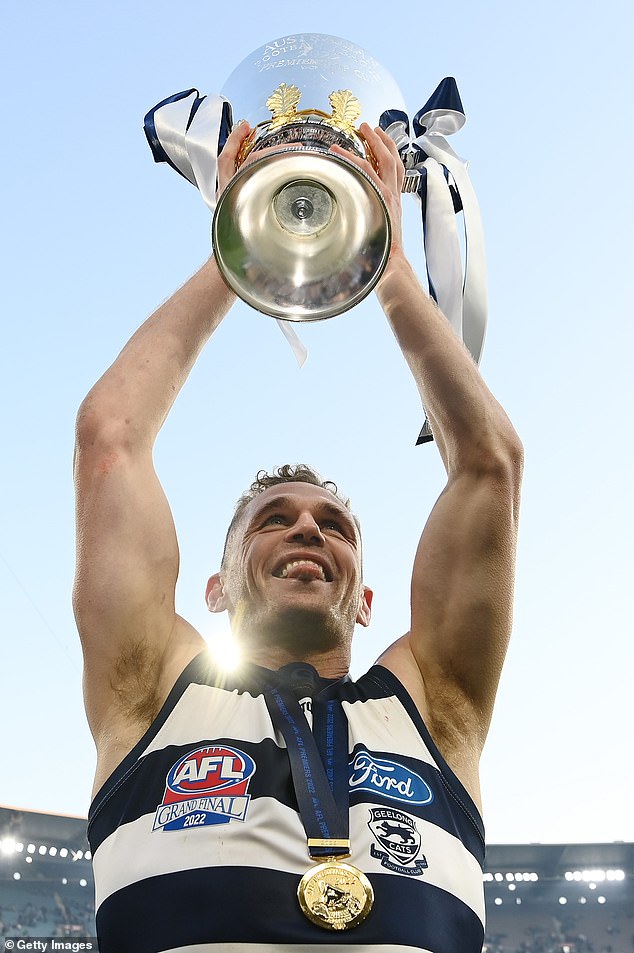 The 34-year-old champion midfielder, who this week announced he would hang up his boots after guiding the Cats to another flag (pictured) last Saturday at the MCG against Sydney, is one of the good guys in the AFL.

Selwood, a third pick in the 2005 national draft, bided his time before his 2007 debut and was an instant star with the Cats.

The Premierships followed in 2007, 2009 and 2011, before his fourth at the MCG, as captain, in one of the most dominant team performances seen in recent years, last Saturday.

Selwood is also a six-time All Australian and holds the record for most career AFL finals appearances, with 40 games.

He and his wife Brit recently announced that they are expecting their first child after trying to conceive for several years.

‘Our dreams have come true. Brit and I are grateful to be able to share that we have a little boy coming into the world,” Selwood wrote on Instagram. 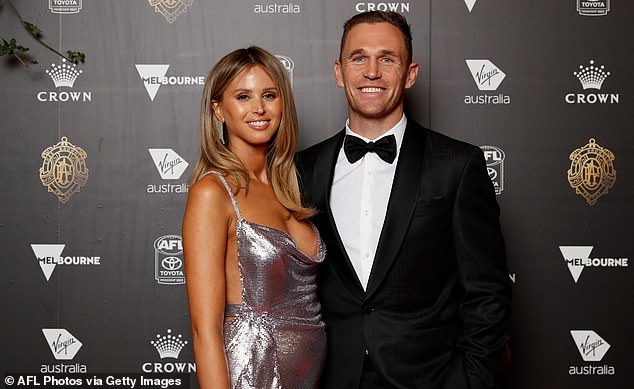 Selwood and his wife Brit (pictured) recently announced that they are expecting their first child. 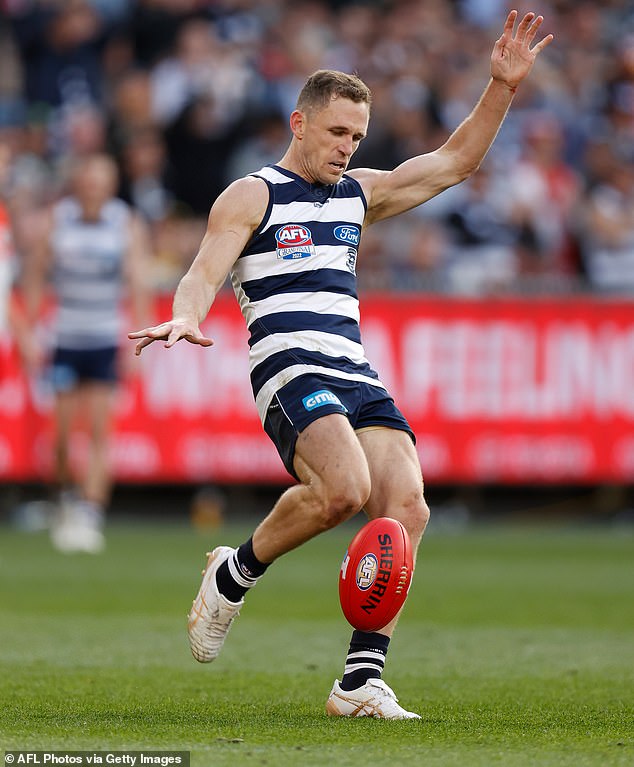 Selwood, a third pick in the 2005 national draft, bided his time before his 2007 debut and was an instant star with the Cats.

‘We hope to be ‘mummy and daddy’ and that the world will change for us in the near future.

“What I have discovered through this process is that women are amazing and my wife is a superwoman. On a journey that hasn’t been easy, we’ve found a way, through great support and Brit keeping a positive attitude.

‘To couples who are trying, have tried or can’t have a baby for some unfair reason, we see you and send you love and positive energy.

‘We can’t wait to meet you Baby Selwood, you will be so loved.’