Authorities confirmed that Kayla Bailey, the daughter of Basketball Wives star Brooke Bailey, was the victim of a car accident Sunday near Hollywood, Tennessee.

Kayla, 25, and driver Julius Weaver, 38, of Cordova, Tennessee, were killed when they collided with a tractor-trailer on Interstate 40 around 4 a.m. Sunday, authorities said.

The Memphis Police Department said the blue Mercedes-Benz S550 in which Kayla and Weaver were traveling was heading east on the highway when it “hit the front end, the rear end of [the tractor trailer] stopped in the lane of traffic due to a crash at that location,’ according to a report obtained by WREG. 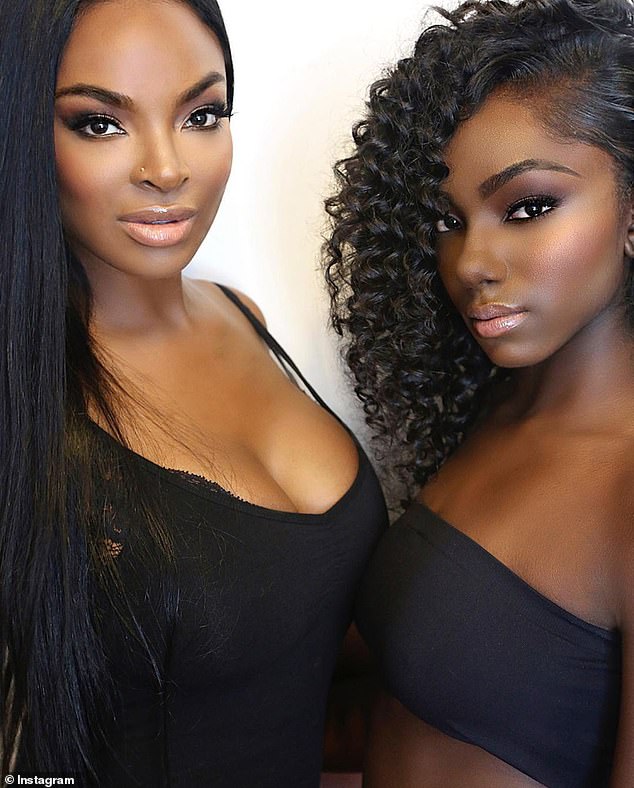 Latest: Authorities confirmed that Kayla Bailey, 25, (right), the daughter of Basketball Wives star Brooke Bailey, 45, was the victim of a car accident Sunday that occurred near Hollywood, Tennessee.

Weaver was pronounced dead at the scene, while Bailey was transported to Regional One Health, where she later died.

Authorities, who are continuing to investigate the Deadline crash, said Weaver had been “inattentive” on the road in the moments leading up to the crash.

Brooke, 45, paid tribute to her daughter Kayla, 25, on Sunday in an emotional Instagram post alongside a series of photos.

‘Forever my baby, Pretty Black aka Kayla Nicole Bailey. This is not a good bye. Mommy I’ll see you soon,” Brooke wrote on Instagram. 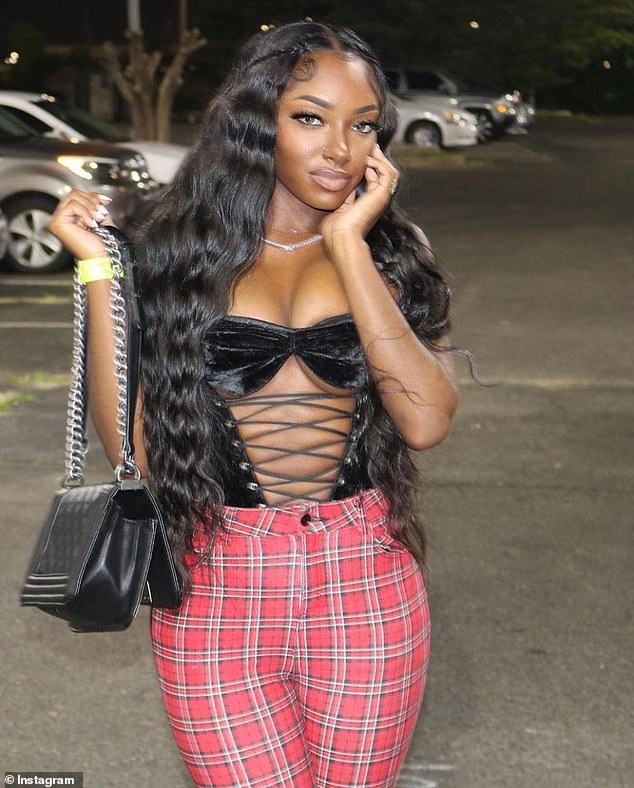 Kayla, 25, died in a car accident. Brooke was one of many who posted a heartfelt tribute in her honor. 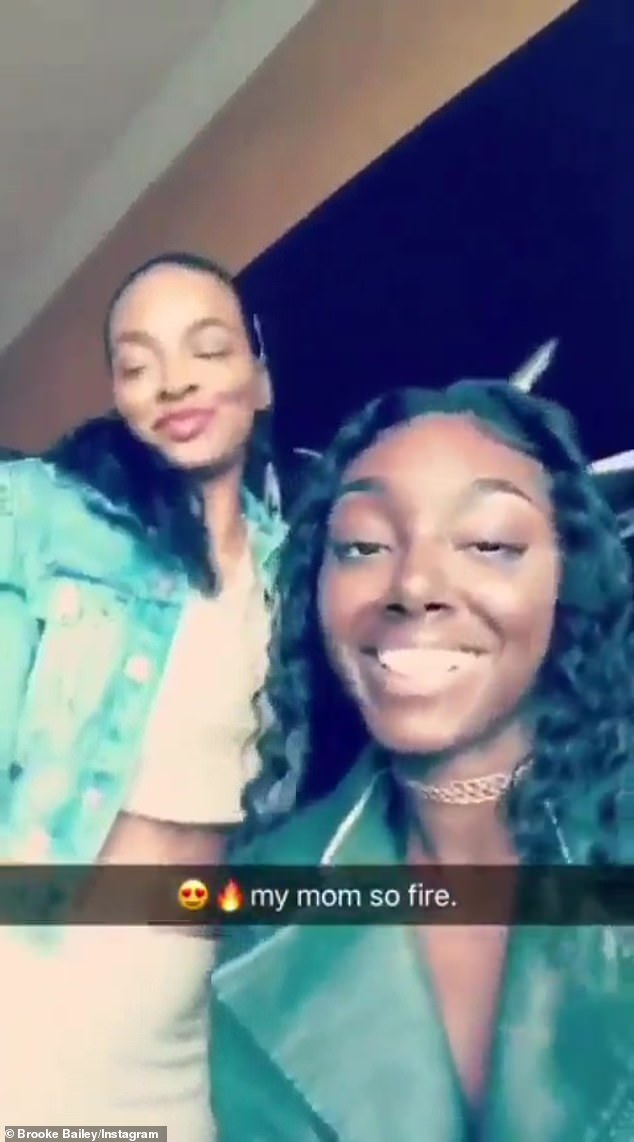 The mother and daughter were seen together in a selfie Brooke shared on Wednesday. 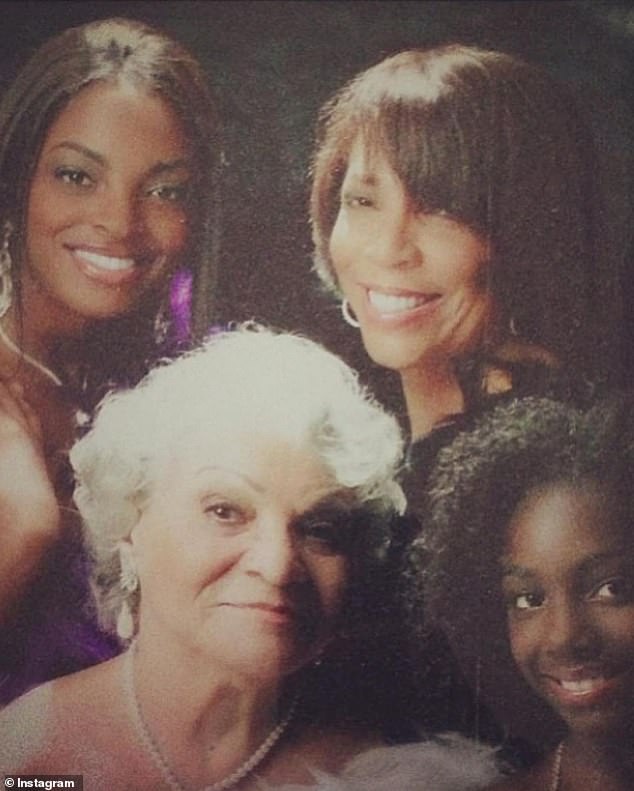 ‘Thank you! Kayla left a mark on so many lives. She walked into the room and demanded respect, love and attention,” Brooke wrote in the caption attached to a series of photos of her daughter and her family. 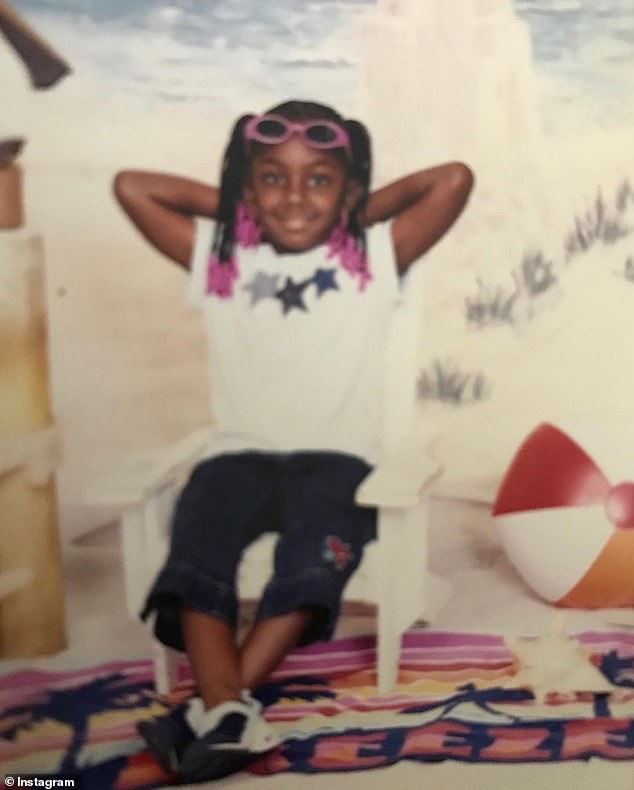 “Forever my baby,” Brooke captioned a series of photos of Kayla.

The reality star mourned her daughter in a series of Instagram stories and shared multiple tributes.

Brooke wrote: ‘My girl is so loved by all of you! The love and support my family has received today is unreal and greatly appreciated.’

‘Thank you! Kayla left a mark on so many lives. She walked into the room and demanded respect and love and attention,” she continued. ‘If you had the pleasure of meeting her and being friends with her, she changed your life forever.’

Fans were stunned by the news of Kayla’s death, as her Instagram stories were still up hours after her death.

‘Kayla Bailey’s fucking IG stories are still up and she’s in the car. S**t like that always throws me. Life is too fragile and can change in a split second,” one person wrote. 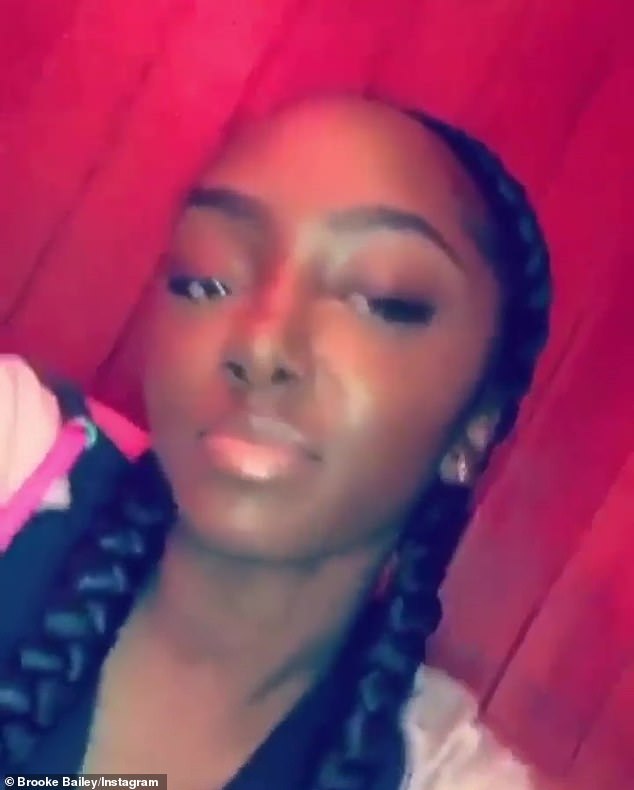 Bailey was transported to Regional One Health medical center, where she died. 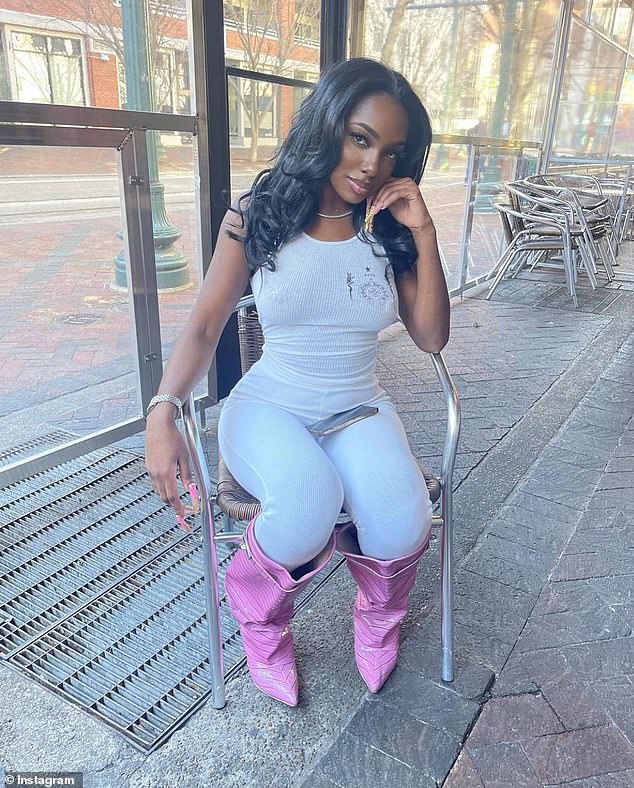 The reality star mourned her daughter in a series of Instagram stories and shared multiple tributes. 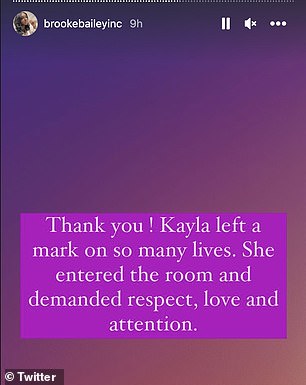 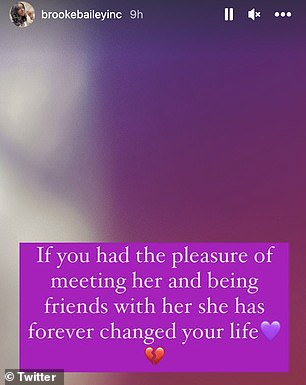 Brooke reposted dozens of heartfelt Instagram tributes in honor of her daughter on Sunday. She graciously thanked everyone for her support and shared more about Kayla. 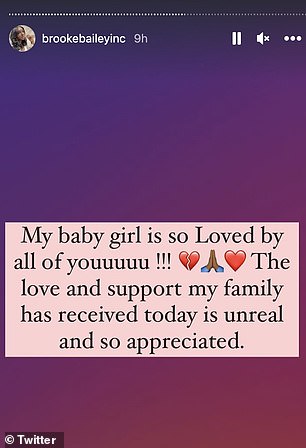 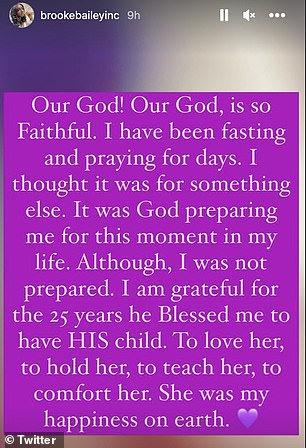 Brooke revealed that she spent time praying and fasting before Kayla’s tragic death. As she prepared for something else, she believed that God was preparing her for Kayla’s death.

The stylist’s fans were quick to mourn her on Twitter. Some were heartbroken to note that her Instagram stories were still up after her death was announced.

The reality star later added that she had been fasting and praying in preparation for something and that she did not expect it to be the death of her daughter.

‘Our God! Our God, he is so Faithful. I have been fasting and praying for days. I thought it was for something else. He was God preparing me for this time in my life. Although, I was not prepared. I am grateful for the 25 years He blessed me to have HIS son. Love her, hug her, teach her, comfort her. She was my happiness on earth,” Brooke wrote.

Meanwhile, Kayla’s loved ones were quick to announce her death upon receiving the news.

“Honestly I’m the best speechless,” one of Kayla’s friends posted in a tribute. ‘It broke me to pieces getting that call this morning. Mrs. PrettyBlack the Barbie. The best part is that I’m so sorry this happened to you, young, beautiful, sweet soul. I love you very much. Growing up, Mom protected us from accidents like this.

Another friend added: ‘I really don’t even know what to say at the moment. My best friend. My sister. My partner. My everything… has transitioned. I couldn’t even sleep last night, all I keep thinking about is you. I am so glad we were able to spend time together 2 weeks ago. I’m going to miss your crazy ass. You were ALWAYS GOOD, ALWAYS SAFE when you were with me.

‘I can not stop crying. This was family. Love to your friends, love to your family. Death has no name. Give your people their flowers while they’re still here. 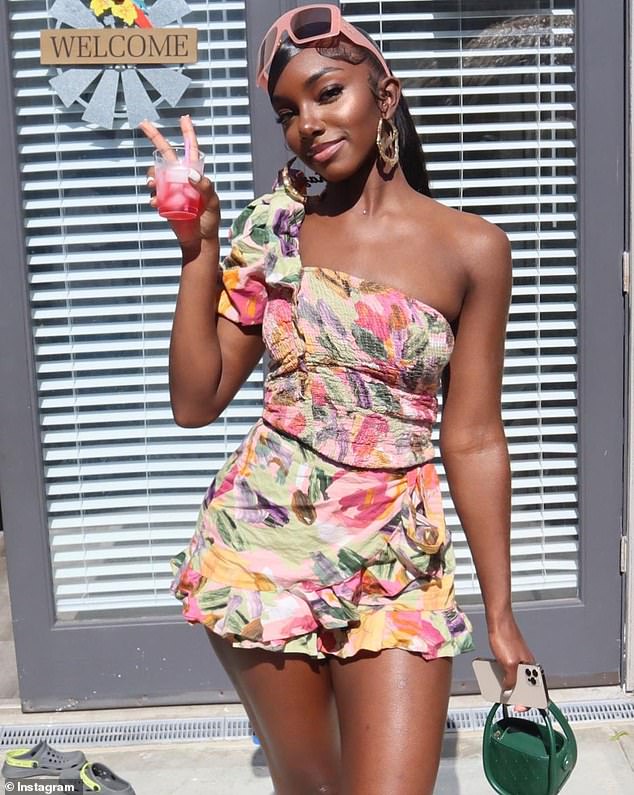 Kayla’s loved ones were quick to announce her death upon receiving the news. 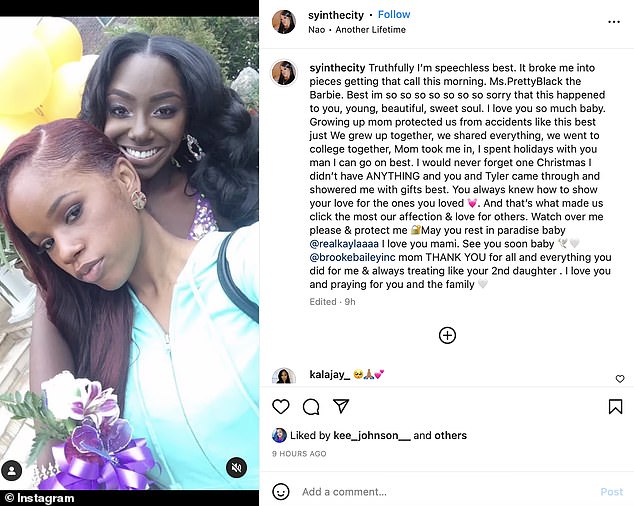 Kayla’s friends and family were shocked to hear the news and shared their favorite moments with the 25-year-old. 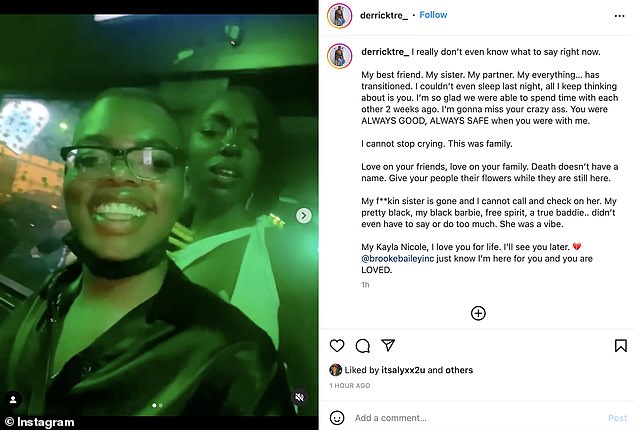 “You were ALWAYS GOOD, ALWAYS SAFE when you were with me,” wrote one of his friends. 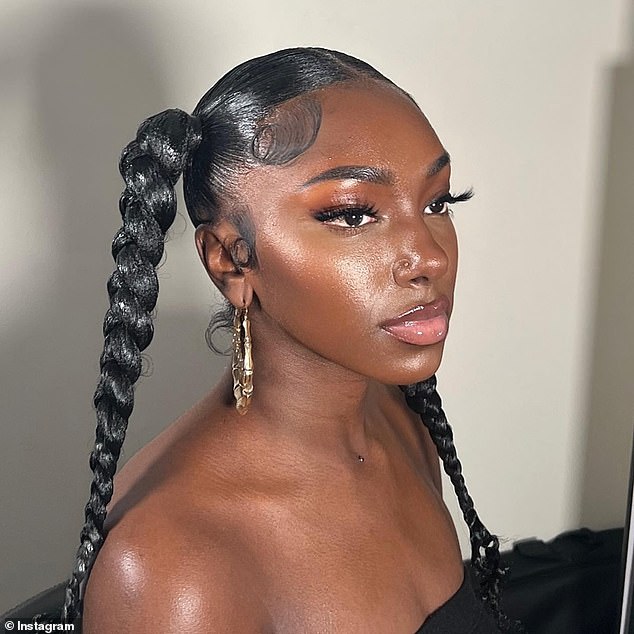 Kayla was a certified hairstylist with her own business in Memphis.

Kayla was a certified hairdresser and business owner at the time of her death. The stylist’s fans also mourned her on social media and remembered her as a beauty.

‘This is beyond heartbreaking. I can not believe this. Kayla was only 25 years old. Lord I just don’t know what to say, every day we lose our young people,” one person wrote.

Another added: ‘I remember seeing Kayla Bailey on this season of #basketballwivesla and being in awe of how beautiful she was. Hearing that she has passed away has truly made my heart skip a beat…so young and beautiful. Life is too short, man.

As Brooke returns to season 11 of Basketball Wives, along with co-stars Jackie Christie, Jennifer Williams and Angel Brinks, it’s unclear if fans will get a closer look at the recent tragedy.