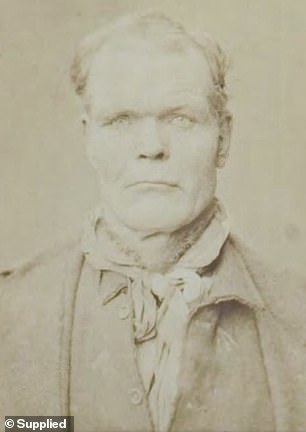 Hangman Michael Gately was more despised than the men he executed at Melbourne Gaol. The former convict is pictured about 1865

‘A great brute who would boil babies if ordered to do so’ – that was how Melbourne Gaol’s governor John Buckley Castieau regarded the city’s hangman Michael Gately in the early 1870s.

Gately was more hated than the men who died in his nooses – so much so that he was hunted through Melbourne by armies of larrikins.

I encountered this flame-haired man-mountain when researching my book Hanging Ned Kelly and, even by the brutal standards of the day, he stood out as a monstrous figure.

Born in Ireland around 1824, Gately at age 16 committed a burglary that got him transported to Van Diemen’s Land for ten years. It was a big sentence for a small boy; the freckle-faced lad was just 4’10”. He’d soon shoot up to 5’10”. 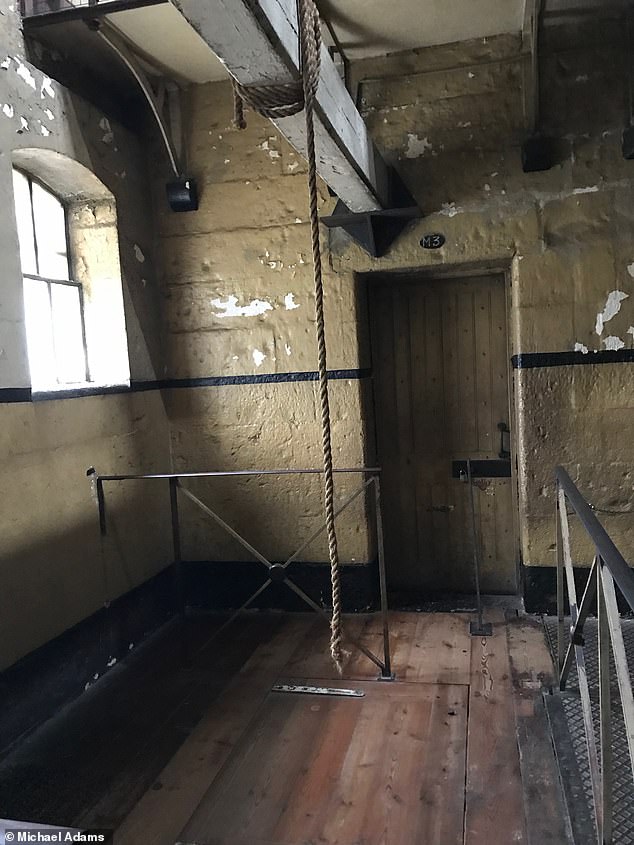 Michael Gately was a prisoner when he took on the role of flogging other inmates for £1 a job. He moved onto to hangings, some of which he bungled badly. The hanging beam and trapdoor at  Old Melbourne Gaol, which is now a museum, are pictured above

A decade later, free in Victoria, he lived life of petty crime but was a terrible crook, repeatedly caught, convicted and imprisoned. Gately spent most of the 20 years from 1853 behind bars in Pentridge, Melbourne Gaol and on the prison hulks in Port Phillip Bay.

So it was that Gately was in Pentridge in 1873 when Victoria’s long-serving drunkard hangman and flagellator William Bamford died from the effects of his hard life. Gately took over the role and was to receive the same freelance rate: £5 per necking; £1 per whipping.

Gately proved ferocious with the cat-o’-nine tails, earning the approval of the newspaper reporters who savoured every lick of the lash as it sprayed blood and flesh into the air at Pentridge.

Shortly after Gately was released in November 1873, he continued the tradition of previous hangmen by getting drunk a lot and living in the parks. 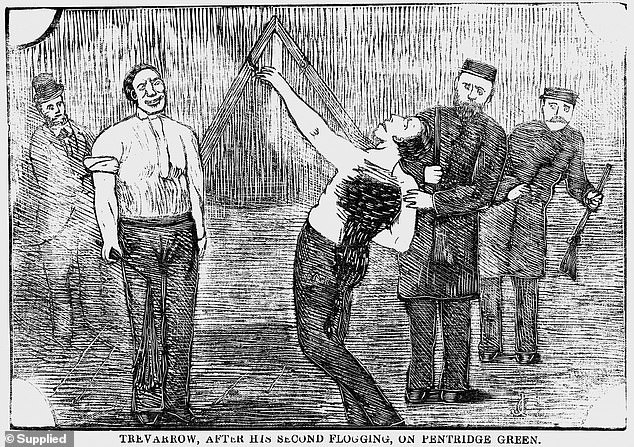 The sex-and-gore tabloid Police News made Gately famous with its lurid illustrated stories of his hangings and floggings. The August 21, 1876 issue published a sketch celebrating Gately flogging a paedophile (above)

He added a twist when he threatened to stab two officials who told him to move on from Flagstaff Gardens. Back inside Melbourne Gaol he went – having picked up a case of gonorrhoea from the ‘fallen women’ in his entourage. But Governor Castieau noted his mood improved when he was assigned a flogging. 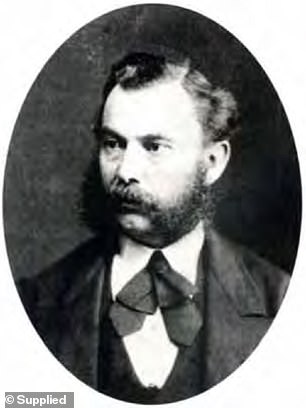 Gately’s bestial nature supposedly even extended to catching rats with his teeth, shaking them to death like a dog and then spit roasting them so he could, as The Age reported, ‘eat them with every expression of relish’.

During his first two years as hangman, there was a lull in executions so Gately had to content himself with floggings and causing havoc in the brief periods he was out of prison. But his life in the streets was increasingly dangerous. Larrikins hated him for the lashings they’d received – and they’d take any chance they could to harass him.

Gately’s gallows debut came in August 1875, when he hanged Chinese man Ah Cat, who had been almost certainly wrongly convicted of murder.

The Mount Alexander Mail reported of his death: ‘The body dropped and through some horrible bungling in fixing the knot, life was not extinguished for some seconds, the hands forcing themselves up to the face in a nervous twitching. However, in a few minutes all was over, and Ah Cat was no more.’ 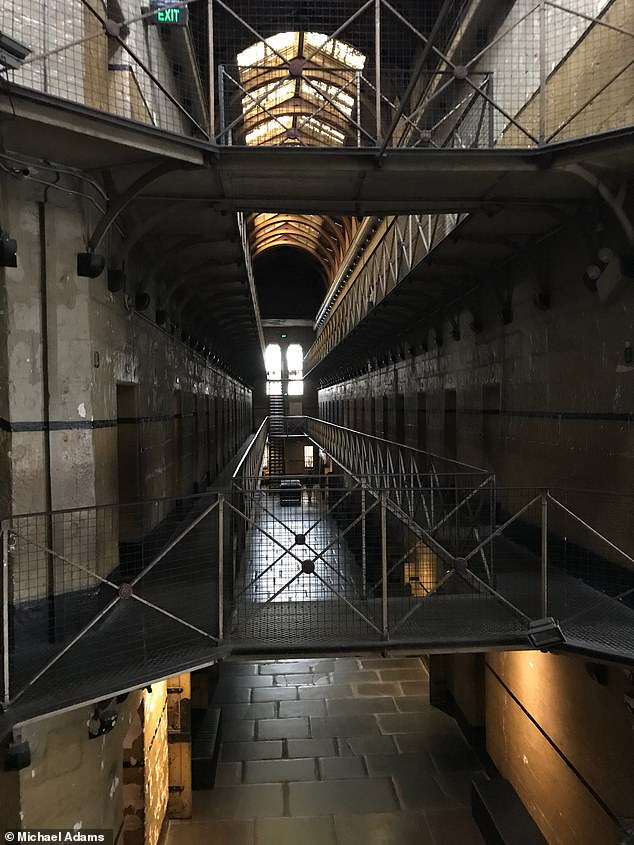 Gately’s bungling reached a new low that May 1876 when rapist John Duffus hit the edge of the drop and then strangled as his hood filled with blood. It took him eight minutes to die, with one report claiming his ear had been ripped off. Old Melbourne Gaol is pictured

Three weeks later, Gately hanged another Chinese man, An Gaa, widely believed innocent by virtue of insanity. Gately got it ‘right’ and he died in seconds.

Not so his next victim, Frankston hotel keeper and double-murderer Henry Howard, who convulsed so violently The Age said he was ‘expiating his crime by a slow process of suffocation’.

Burglar John Weachurch died fast, but only after years of suffering arbitrary detention, secret punishments and brutalisations in Pentridge. This prolonged torture led him to on three occasions stab and wound warders. The first time, his death sentence was commuted. Second time around, the jury acquitted. Third time he went to the noose. 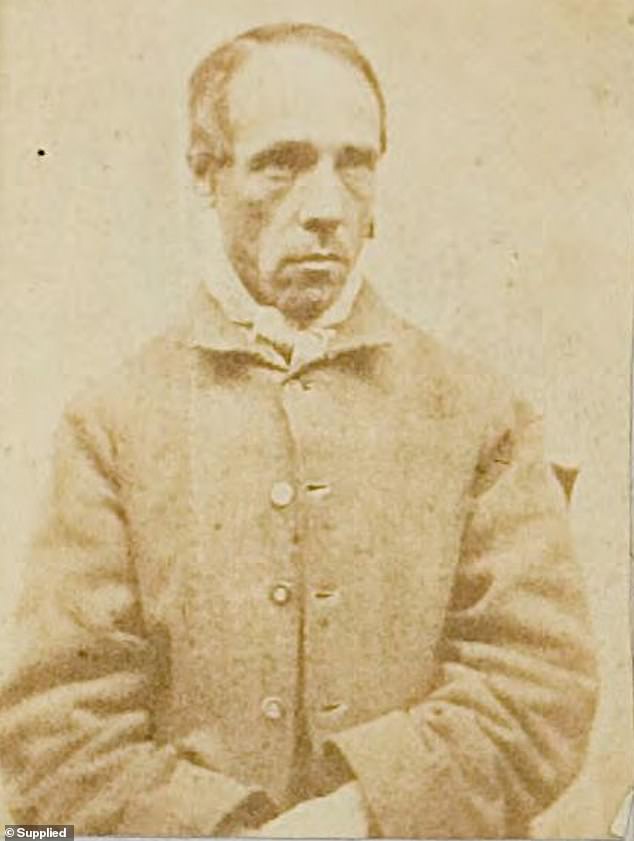 Burglar John Weachurch was put to death in one of Gately’s less gruesome executions. Weachurch had stabbed warders on three occasions. He has hanged at Old Melbourne Gaol in December 1875 after twice escaping the noose

Gately was released in mid-February 1876. His next drunken rampage in Melbourne was so full-on it was lucky no-one was killed. The Mount Alexander Mail asked: ‘Who shall hang the hangman?’

Gately’s bungling reached a new low that May when rapist John Duffus hit the edge of the drop and then strangled as his hood filled with blood. It took him eight minutes to die, with one report claiming his ear had been ripped off.

Despite all of these outrages on the scaffold and in the streets, Gately kept his job. This was the way Victoria had operated since 1847. Hangmen were supposedly hard to find, so it was easier to stick with the one you had. Even if he was as mad as a cut snake. 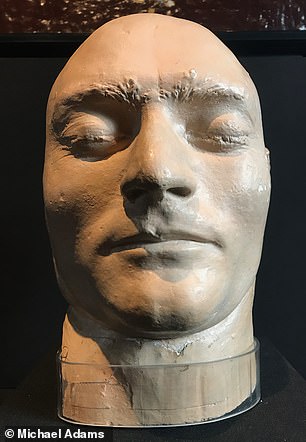 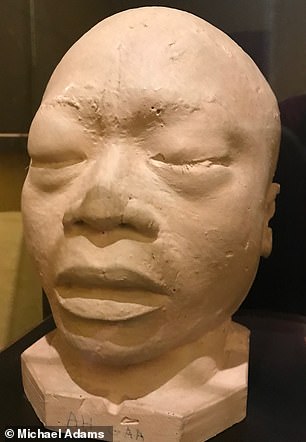 Casts of executed inmates’ heads were taken after hanging to produce ‘death masks’. The death masks of bushranger Ned Kelly (left) and murderer An Gaa (right) are on display at Old Melbourne Gaol. Gaa, who was hanged by Gately, was widely believed to be innocent

But what really outraged the colony was Gately falling in  love with a young woman named Mary Parsons. He was 50; she was 19.

The pioneering sex-and-gore tabloid Police News had already made Gately a celebrity with its lurid illustrated stories of his hangings and floggings. Now they loved the idea of such a villain being lovestruck.

The mainstream Melbourne newspapers were similarly fascinated. The wedding made news around Australia, with Sydney’s Evening News running the headline ‘A Hangman in Love!’

One Melbourne paper printed Gately’s address and hundreds of larrikins stoned the couple’s rented love nest and chased Gately through the city. 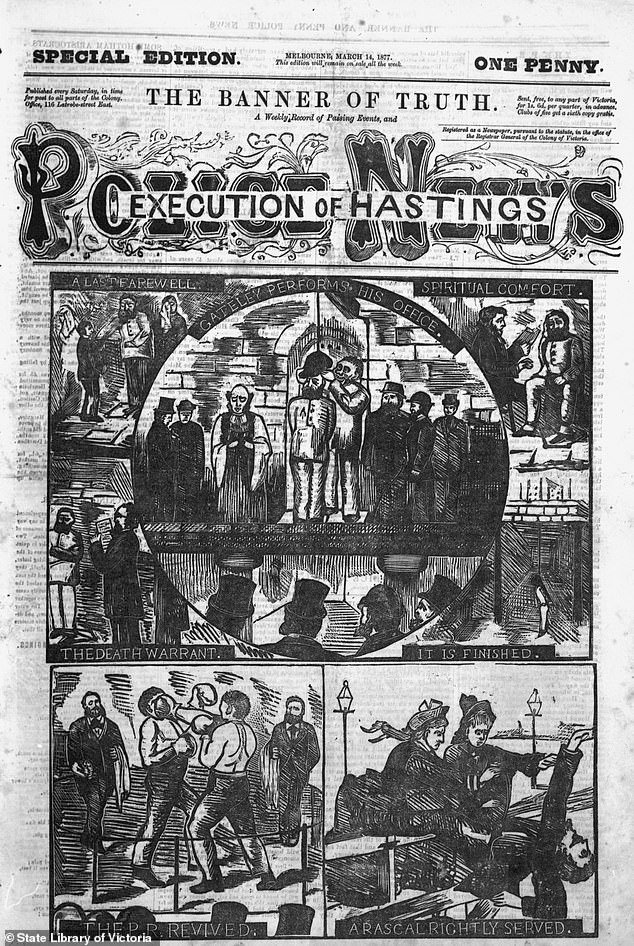 Gately’s exploits, including his marriage to 19-year-old Mary Parsons when he was aged 50, made news around Australia. The Police News put out a special edition (above) on March 14, 1877 to commemorate Gately hanging wife-killer William Hastings

From then on, whenever the couple appeared anywhere, angry crowds gathered, with one such melee involving 500 hundred thugs taunting Gately and Mary as police tried to maintain order.

Columnists wondered how the government would solve ‘The Gately Difficulty’. But he solved it for them, by committing a serious assault, for which he was sentenced to three-and-a-half years.

Gately was inside in October 1878 when Australia was electrified by Ned Kelly’s gang killing three police officers at Stringybark Creek.

If these four bushrangers were taken alive, Gately was set for his best payday yet – £20. He’d also get their clothes – a traditional hangman perk – which he’d be able to sell to the waxworks to dress the crowd-pleasing effigies whose faces would be moulded from death masks.

Gately was back on the streets in February 1880. But Mary wanted nothing to do with him. Several encounters culminated with him trying to strangle her and being returned to gaol. 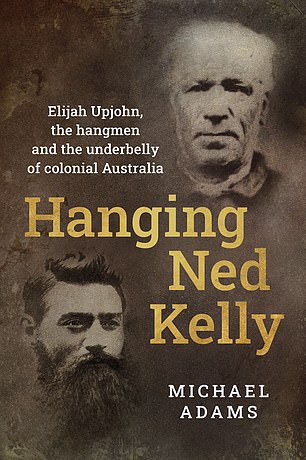 Released in mid-June 1880, Gately learned Mary had taken off to Sydney. So, in a remarkable twist of fate and timing, he went after her.

That meant the hangman role was vacant. A fortnight later, Ned Kelly was the sole survivor of his gang’s last stand at Glenrowan and certain to be hanged. A Ballarat jailbird chicken-thief named Elijah Upjohn put his hand up to do the job.

Up in Sydney, Gately went on a drunken bender that got him arrested. Released after paying a fine, he heard Mary was by now in Brisbane.

He headed up north but only wound up behind bars at St Helena for the usual offences. There he acted as assistant in the hanging of an Aboriginal man.

For the next few years, Gately bounced around, in and out of gaol, before he finally expired at Roma in August 1883.

Learning a Victorian celebrity was buried in their colony, The Queensland Figaro’s obituary summed up his miserable life:

‘When he wasn’t scragging a felon, he was engaged in either of the delightful occupations of getting drunk or kicking his wife.’

Hanging Ned Kelly by Michael Adams is published by Affirm Press and is available now from book shops. It can also be purchased here. To hear a free 40-minute excerpt of Hanging Ned Kelly, go to Forgotten Australia.

Bambi Does Beauty: DIY method to check your skin type

BBC ‘flipped the chance to keep Ken Bruce’ when…

Saying goodbye to Anthony Gordon will be Sean Dyche’s…

A bed that really IS fit for a king! Charles offered unique…